We had a brisk 5 day passage to the Tuamotus and our first stop was Kauehi. 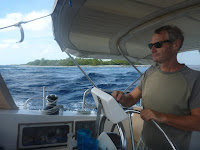 Kauehi has only one 'pass' into its interior.  The rest is reef and land, so when the tide turns almost all the water is rushing in of out of this 'pass'.  You plan to arrive at slack water but if it looks okay you can go in a little before or after.  It was a little rough coming in but not bad at all.  The panorama didn't work out very well but you can make out the 'pass' between the two points of land if you squint a little. 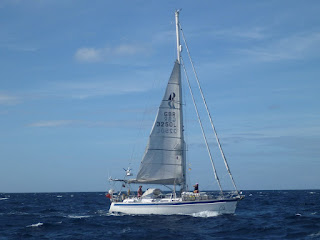 It has an easy entrance and we arrived in the early morning just in time to see Bruno's Girl leaving.  We waved and passed and took photos. 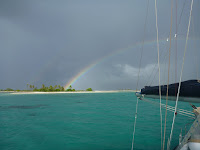 After the first and maybe second day of blue skies, the weather became wetter and windier, but we still had the occasional clear skies. 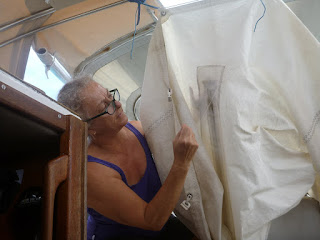 Time for making repairs to the baton pocket on the mizzen.

One the baton on the widest part of the sail, Tim was on one side of the sail and I on the other and we pushed the needle and thread back and forth.

I think we did quite a good job making a neat pattern so that if you only looked at one side it appeared to be sewn with a machine.

There wasn't wonderful coral in the atoll but the fish life was very good. 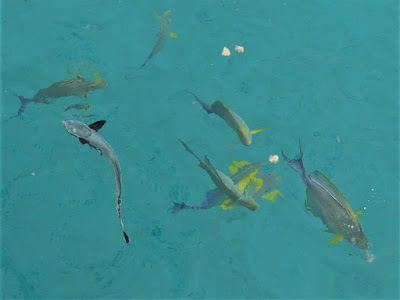 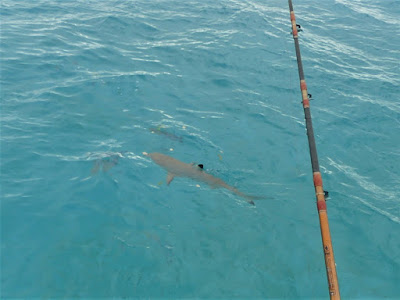 Our stale bread lured the remora, the whippy looking fish with the black fins, our from under the boat.  You are looking at them from the top.  The tread like mark on the back of their head is a sort of suction pad that will grip the bottom of the boat in the hope of bits of food coming out the drain with your dish water.  They are quite cool to watch but there is something a bit repulsive about them too.  Tim does NOT like to clean the hull with any remora in attendance.  Reef fish came to partake of the bread as well and in time a small black tip reef shark made a number of passes just to see what was going on.

Reef sharks are curious but are of no danger to snorkelers or divers.

Now I know I have more photos of Kauehi, but cant locate them right now and we will be on the move shortly so I will try to update this blog the next time we have wifi.

Today we are sailing from Moorea to Taiatea.  We have been waiting for wind and it has finally arrived.  Lots of boats have been leaving all morning.  As it should take us about 16 hours to get there we are leaving mid morning to arrive nice and early tomorrow morning. 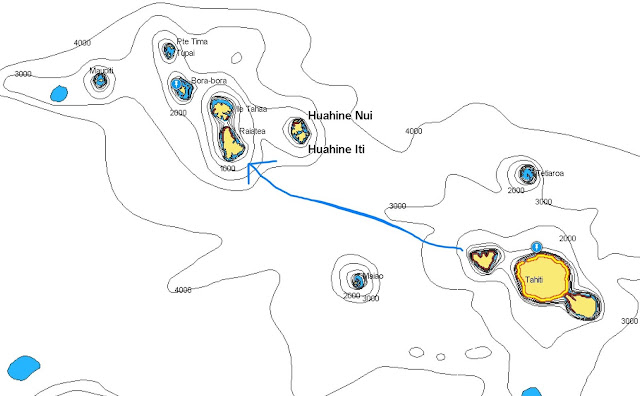 We will continue to post to the Cruisersat.net which you can see at the top of our blog.

That's all for now!