Curacao and getting into Rally Life

We arrived in Curacao on the 4th of November after three nights at sea.  The first night was a fast rollicking rolly sail.  A 1.5 to 2 knot westerly current helped keep our boat speed at over 7 knots, but the messy following sea made Larus roll back and forth with the odd short sharp jerk which was just enough to keep us from getting much sleep.  The next 24 hours was a brilliant sail with the wind and sea moderating.  We were grateful for the nice easy motion and took turns sleeping both day and night.  Once we had got used to the fishing boats that surrounded us all night long, we were quite contented. They looked very close when all you could see are their very bright deck lights, but with a quick check on the radar for those not on AIS (Automatic Information System) they were actually miles away and were just drifting with the current as they did whatever they do in the night.  The last the last day and night were a mix of wind, no wind and the occasion rain squall with no wind to speak of at dawn and we motored past Bonaire and down the west coast of Curacao.

The island is more like Antigua than any of the southern Caribbean islands, flat without mountains or rainforests. 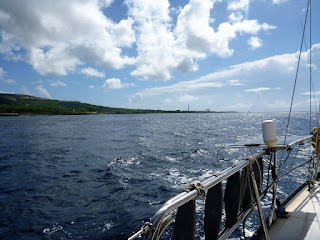 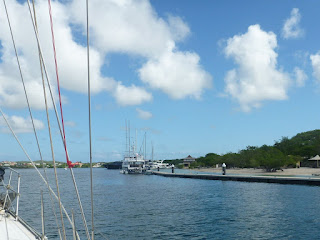 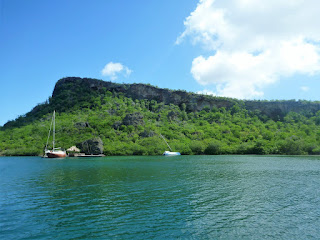 First photo - Looking back to the south end of the island as we motored up the coast. Second photo - The Santa Barbara Resort where some of the larger Rally boats have moored up on the outside of the pontoon. Inside the pontoon is the resort's beach were the Rally crews can meet at 4 in the afternoon to swim and meet up. Third photo - An example of the rocky outcrops that make up the highest points of the island.

Curacao is very organised and there are 3 main anchorages A, B and C.  Most of the Rally boats are in anchorage C and make it possible to cater for so many boats in such a small area, a bouyed line has been installed on one side of the anchorage. 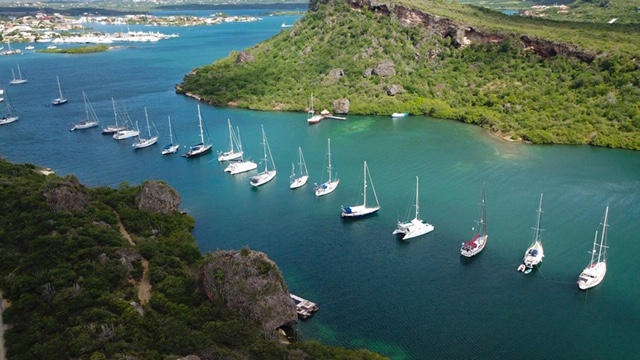 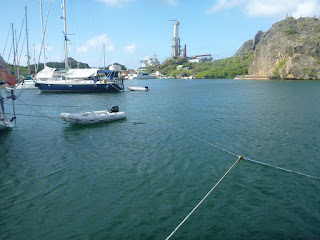 To use the line, boats drop their anchor on the far side of the anchorage and reverse back toward the line, letting out anchor chain until they are near the line.  Next a kindly Rally members take two lines from the anchored boat and attaches them to the line so that the boats are held securely from the bow with the anchor and from the stern with the lines.

Its all very friendly and there are lots of perks to the set up.  A local supermarket has laid on a free bus twice a week for all your shopping needs.  As its the beginning of the season, people are still getting their boats ready and if help is needed, it is near at hand.  Last week, Tim and I helped our starboard neighbour take down their sails to be repaired.  Its a very social time and we're meeting lots of old friends and making lots of new ones.  There is also organised Paddleboard Yoga and Noodling, a water exercises performed with large bendy noodle. 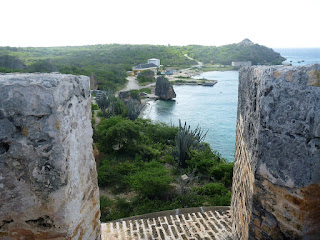 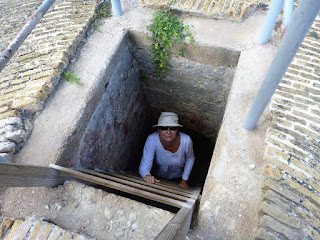 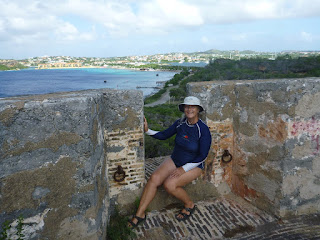 Just before the large rock in the first picture is where we do the noodling. The next too are of the fort Leslie, from Ocean Blue and I climbed to see the view.

I've had the time to do some new recipes. 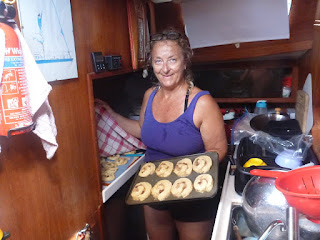 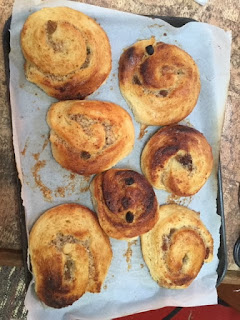 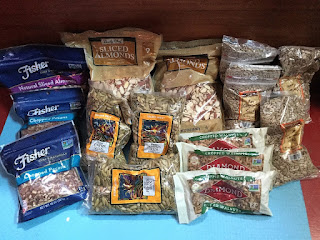 I've had time to make quite a lot of a faux Pain au Raisin which are pastries with almond paste and raisins.  We were given quite a lot of nuts by a boat that had planned and provisioned to cross the Pacific Ocean but then decided to sell up and return to Australia. I have plans for the pecans (Holiday Fruit Drop Cookies) and walnuts (whole wheat and oatmeal banana muffins) and we are eating the pumpkin seeds as snacks and I add them to my porridge, but the 10 lbs of sliced almonds took a bit more thought.  We have eaten some and I tried and failed to make almond butter - between the sliced almonds being rather old and my food processor not really being up to it my first attempt was a dry crumbly almond meal.  This gave me the idea to make the almond paste for the pastries.  The recipe called for a yeasted dough that you roll out, spread with soft butter, fold, chill, roll, butter, fold, chill, roll butter...etc. I would have been able to manage the rolling, buttering and folding but with our tiny and very full fridge and freezer there was no way I could have chilled the dough so it didn't become a greasy lump. Thin layers of butter are what make the pastry flaky.  Instead I used a sweet bread recipe which worked reasonable well but it is a two loaf recipe and it made a LOT of little buns.  Marine ovens are notorious for not cooking evenly and ours is no exception.  It takes a lots of watching, turning and raising and lowering the temperature to get anything to brown.

With far more buns that we could or should ever eat, I took most of them from boat to boat at the anchorage and shared them around.  I was glad I did because by the next day, they were tasty but dry as dust from over baking to give them some colour. 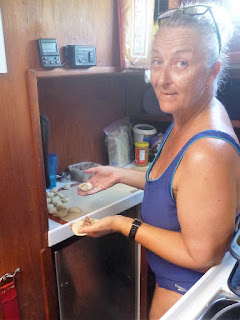 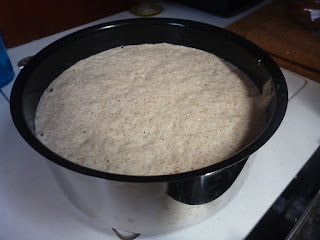 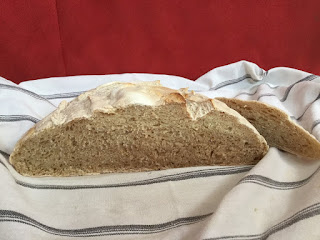 I've also made Chinese Potstickers which were fussy to make and the little folds that close the dumpling and give them there distinctive shape. If you fancy a go, here is the Best Chinese Potsticker Dumpling Recipe that I used and will use again. I have bunch frozen and can cook them up in about 20 minutes for when we go visiting or have guests on Larus.

Sourdough bread is something I'm trying my hand at as well.  The photo in the middle is of the sourdough starter and the last pic is the loaf.  I couldn't get much of a crust on it and no brown at all, but it was delicious and chewy with a wonderful flavour.  I have a huge amount to learn about sourdough baking and you will hear a lot more about it.

Today we are starting our journey to the next island stop in the Suzy Too Rally, Aruba.  We will be leaving the anchorage soon and going to clear out at the Santa Barbara Marina where we for a 'beer and a bob' in the late after noon.  We and a lot of other boats will anchor on the north west coast Curacao tonight and start at daylight for Aruba to arrive in the afternoon. It will be a nice change to sail in company and we're looking forward to the coming weeks.  Just doing our last bit of preparation and we will be off.