Too wet, too dry, too hot, too cold….what is climate change?

Settling into NZ cruising isn’t going quite as one would hope.

When we left Fiji Tim had the beginnings of a nasty cold. He coughed his way to NZ, but a Covid test mid-passage assured us that it was just a cold, which improved as we went along.

I’ve been pondering where the heck he could have picked it up.

Living on a boat, usually at anchor, means we spend little time mingling with the general public and when we do most of it is in the open air. The chance of catching anything is quite slim and there is little Covid around to catch anyway.  I remembered eventually our last provisioning trip from Denarau Marina to the shopping in Nadi was on the Saturday before we departed.

The bus trip was, as usual, a handful of people on a bus with large windows, wide open, Nadi, however, was heaving. There was a fun fair being erected in the open space by the market, there were lots of people on the street but the open air market wasn’t any busier than normal. Some far so good.

With market and supermarket shopping complete, Tim suggested a taxi back, but the bus is so easy. It’s only $1.50 each, there was one waiting for us, and we climbed on board. Added bonus, the bus was nearly empty, however, by the time of departure, it had filled considerably. Subsequent stops on the way out of town filled it to standing room only and we were squeezed together like sardines. At this point, a woman in the back of the bus started sneezing explosively and repeatedly. She then snuffled wetly for the rest of the journey.

The bus was full enough that there was no way to get to our face masks in my backpack, so we pointed our noses to the open window and hoped our Covid top ups would do their job.

Fast forward to NZ. Arriving after a passage, once you get through the excitement of clearing Immigration and, most particularly, BioSecurity, you can finally relax. Anchored in our favourite spot near Opua, I lay down for an after lunch nap and woke up 5 hours later with a scratchy throat, headache and tickly cough.

My Covid test was negative too, though as Tim hadn’t had Covid it would have had be by via immaculate infection.

Two weeks later, Tim still has the occasional cough and mine still wakes me in the night, but we’re much improved and I’m finally feel good enough to whinge about it.

We arrived on the first of December. An auspicious day as New Zealanders consider it to be the first day of summer.

Winter 2022 has been a rough one for NZers. Unseasonal spring time Lows have been barrelling across the country causing wind and rain and, I assume, keeping the tropical highs from bringing the ‘normal’ New Zealand summer at bay.

In the two weeks we’ve been here, we’ve probably only had 3 days of ‘summer’. Even the Pōhutukawa: The New Zealand Christmas tree is not yet in full bloom.

For my part, I’m actually really enjoying not sweating all the time. It’s so nice to wear a cuddly fleece and sleep under a duvet.

Today, we had planned to head out to anchor in Parua Bay. We’ve done what we needed to do in the marina - repaired the leak in the water tank and visited with Zoe and Bill on Into The Blue - and had no further reason to stay. It was lovely yesterday when we decided this; today we are back into a proper NZ winter day with uncomfortably cold winds and rain. Another day in the marina is a very good idea.

I’ve done some research on the mystery or the mess on our deck mid-passage. 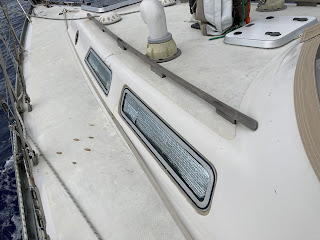 First sight, ‘What the heck is that?’ 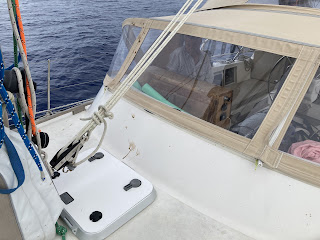 Second sight, ‘WHAT the heck IS that???!!!’
Well, from a website I can no longer locate…

‘When a whale let its breath it can travel at incredible speeds but it also reaches up 30 feet in the air, creating a cloud of mist or spray that almost every person on the ocean is looking for. Now when these whales let out these mighty blows they aren’t releasing water from their blowhole they are letting out air, because their breath is so powerful it causes the water around its hole to create a cloud of mist. Well that mist isn’t just water it actually contains mucus and oils, it’s almost like the whale has a cold and is blowing its nose, gross…. Those whale blows can also be very stinky!

And in case you are still interested, How to tell a whale by their blow.  I’m guessing that a sperm whale passed close to us in the night, and gave a mighty ‘blow’ to the right, as suggested by the spatter pattern.
Back in Fiji, Thant Zin catches his own weight in Trevalli. Thank you, Colin, for the amazing photo. 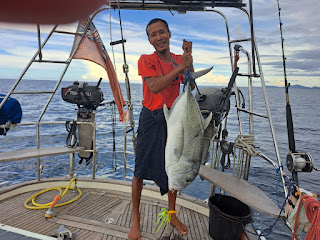 If you are still shopping for holiday gifts, a charitable donation on behalf of a family member or friend is always a much appreciated gift.

One area in need of immediate assistance is the Horn of Africa, https://www.unocha.org/horn, but there are many out there to choose from both near and far.

Posted by Yachtlarus at 17:02 No comments: