We arrived just over a month ago, taking seven and a half days to sail and motor from Bermuda.  We had a very much mixed bag of weather.  Lots of wind and squalls to begin with and ending with several days of motoring.

We are quite envious of a couple we met in Bermuda on a Catamaran called Balloo, who left a week after us and arrived in five days with pretty much perfect sailing conditions.  Ah well, you win some, you lose some.

Sunday the 26th of November we departed Bermuda. 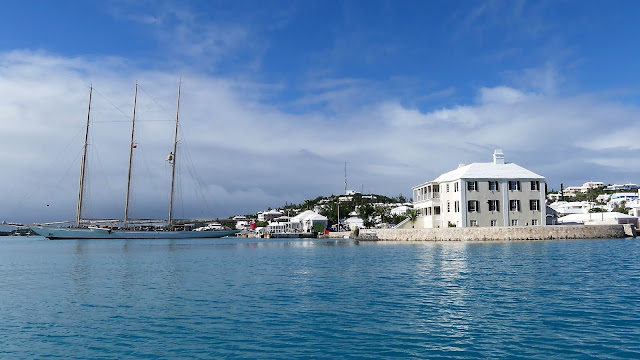 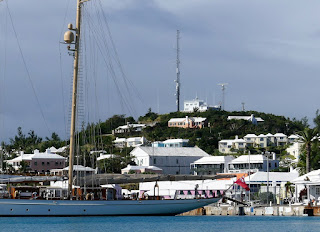 The white building to the right is the Customs Dock and in the distance on the hill and in the closeup in the second photo is the home of Bermuda Radio, the Coastal Radio Station which was so helpful to us when we arrived.  As chance would have it, the same operator was on duty when we left as when we arrived.  He had a very distinctive old sea hand, West Country perhaps, type of voice. 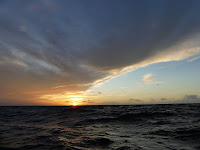 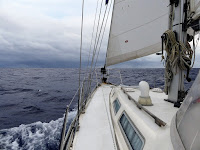 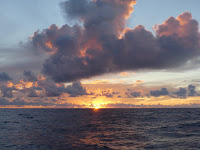 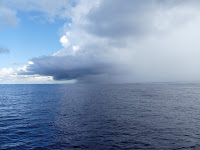 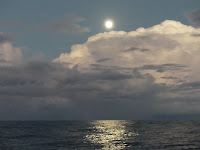 The passage was most notable for the weather. First - the arrival of a line of low pressure called a trough, which replaced our lovely north westerly winds with no wind at all for about 24 hours.  This then developed into a rollicking sail through squalls with winds gusting to 30 knots.  The approach of another trough from the south west replaced windy squalls with big fluffy rain clouds and light winds, which made a fabulous setting for the full moon rising.

Antigua is an old stomping ground for us and after clearing in we moved around the coast to Falmouth Harbour and then English Harbour in search of wifi.  About a week before Christmas we bit the bullet and paid the most we have ever paid for wifi in our 5 years in the Caribbean, only to find out that it wasn't very good at all.  Tim complained to the provider and much to our surprise, it improved.

Over Christmas, I had the company of my friend Susan, who was very pleased to leave the arctic temperatures of Ottawa to entertain me and for me to entertain while Tim was skippering a catamaran of a very entertaining family over Christmas. A good time was had by all.