Now and a bit more Guyana

Here we are mid February 2017, and we're in Antigua once again.

Since I last posted, we have taken Larus to Culebra, Puerto Rico, the furthest West she has been, for a 2 week holiday with my sister. It was a chance to show her a little of the British and US Virgin Islands, which we know pretty well, and then strike out for the Spanish Virgin Islands, which was all new to us.

We sailed, snorkelled, Scrabbled,  Backgammoned and laughed to our hearts content. We have to say Laura really was a trooper as we had 20 to 25 knot winds for our first week in the BVI and we had a few lively sails.  Laura hung on with us as we zoomed toward Culebra.  The seas might well look flat but they most certainly weren't!  Culebrita (Little Culebra) was a great snorkelling location where we saw boxfish, rays and a myriad of reef fish.
. 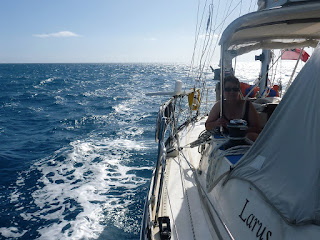 From the BVI to Puerto Rico is all down wind and is MUCH more comfortable than sailing upwind, which is what we started doing the same day Laura left us.

This weekend coming up we have a charter here in Antigua.  We only accepted it because we had three full weeks to get back to Antigua from Puerto Rico, and due to past experience, we fully expected the journey to take most of that time.  If the winds 20+ knot winds from the East of the previous week returned we would have had to wait for breaks in the weather before bashing our way into them.  As it happened, a YUGE storm in the southern states, might well have sucked in air from all around it, as a hurricane does, and changed the wind direction.  We had South Westerly winds for the first four of our day sails East and on the fifth day, the winds reverted back to normal with a touch of North to give us a great direction for sailing on a beam reach straight to Antigua.

We first stopped at St Thomas to stock up on ham on the bone ($1.88 a lb!), grapefruit ($4.98 for 5 lbs!) and pineapples ($3 each!), but early Monday morning not a carrot or cucumber was to be had.  I bought the last extremely sad looking lettuce in the shop just to have something green in our salads. From there we sailed to Virgin Gorda first along the south side of St John and then through the BVI to one of its' most easterly islands, Virgin Gorda.

We set out at first light the next day to St Martin with the hope of arriving not far off sunset, but a half hour out we noticed a small boat in the distance.  As we got closer it became apparent that there was no one on board and it wasn't so much of a dinghy but a RIB (Rigid Inflatable Boat) with a 40 hp engine.  We got a line on it and contacted the Coastguard and began towing it back to the BVI.  We decided that the best we could do was to put the dinghy on a mooring off Nekker Island - where former President Barak Obama was holidaying only last week.  We were later contacted by the RIB owner who was very grateful.

We had a good sail to St Martin and anchored in Simpson Bay for the night. Next morning we ran around picking up bits and pieces for Larus that are very hard and/or expensive to get elsewhere.  After a quick visit with Patrick, who we met in Antigua the very first day we arrived,  we did a short hop to island of St Barts for a very early start to Antigua the next morning.

We were not the only ones taking advantage of the favourable winds and we saw a number of sails in the distance. 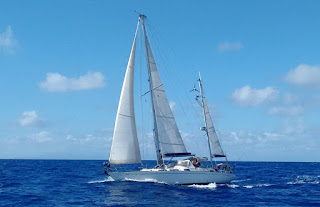 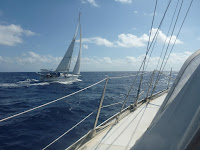 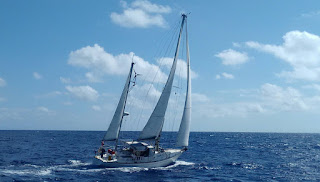 Larus, Ballyhoo and Larus. It was really good fun and we met up with John later in Antigua to swop photos.

And now we are anchored on the north coast off Great Bird Island.  It's a blustery rainy day, perfect for a bit of blogging.

On the 22nd of October I joined a trip to visit Joyce, an American ex-pat who, like Bernard had created a home out of a riverside piece of jungle.

Rainbows are lovely, but they do mean rain, and if you are down wind of them, this means you might well get wet.

We flew past Bartica, 7 of us in two fast RIBs, and carried on down the river.  The island above seemed to be involved in logging and, as the third picture shows, mining.  That red 'house boat' is used to dredge up the river silt in the hopes of finding gold.

You can just see the last of that days blue sky disappear under the clouds. They don't get hurricanes this far south but they do get a lot of rain. 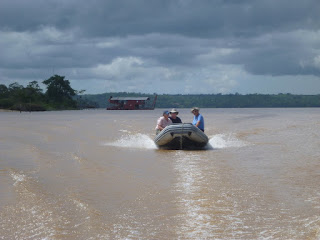 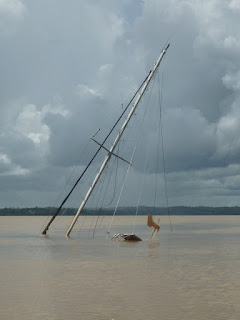 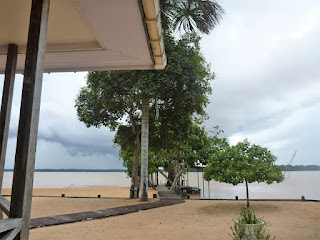 The first thing we saw on the approach to the property was the mast of a long lost sailing yacht. The layout of the property was fascinating.  Joyce and her partner had pushed back the river and the jungle to make an amazing home. I find I have very few photos of the interior. 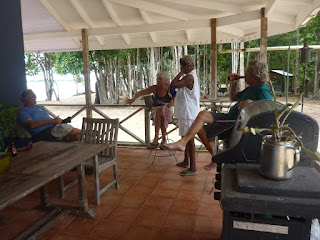 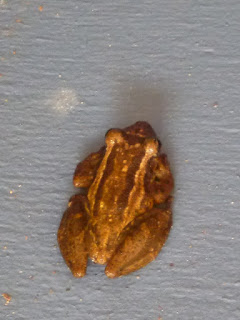 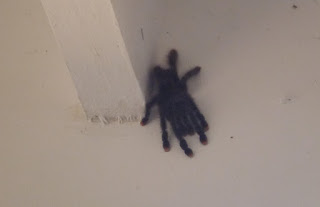 A wide covered patio at the back of house was a great space for eating, cooking and keeping dry.  It was also a good place to see some of the local fauna.  The tiny frog was hiding under a cushion on the sofa and the tarantula was hanging out by the roof joists. 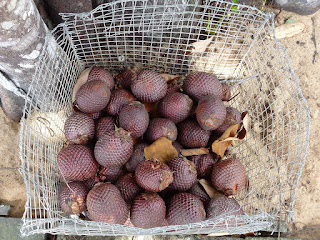 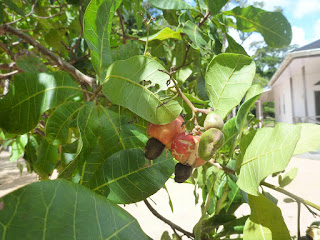 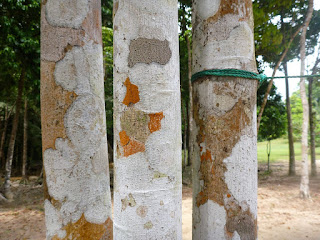 On the flora side there were strange reddish fruit collected and stored in a wire bin, which I neglect to find out what they were.  A couple of cashew trees had black nuts and orange fruits.  Joyce wasn't that interested in the cashews, but the fruit is good to eat if you can get them before the birds do.  The lichens on these tree trunks reminded of calico cats and birch bark trees. 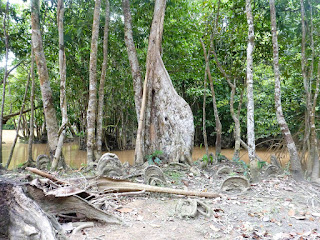 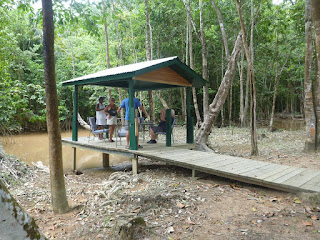 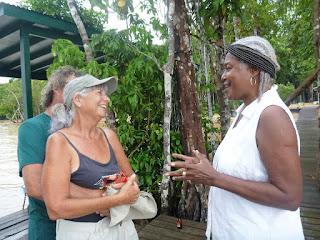 A seated area over looking a stream which flows in to the river on the left.  You can tell by the tree roots that the water level is often a lot higher.  Joyce told us about trimming the trees up to a certain height so you can walk under then and not have anything drop on top of you.  I'm guessing snakes, but maybe spiders too. I love the last photo of Willi and Joyce as we were saying our goodbyes.

It is such an interesting way to live and a contemporary pioneer spirit is needed.  I was so pleased to meet Joyce and see her lovely home.

Our ride home was quite different from the ride there. 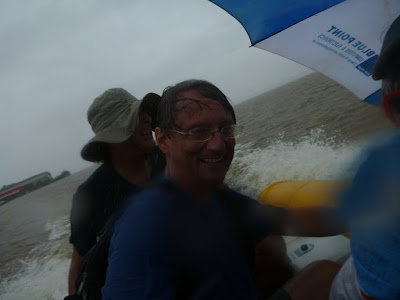 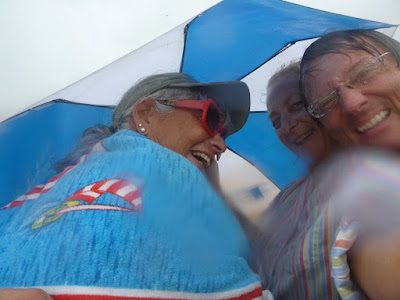 We laughed a lot on the way back to the anchorage, but not all the way.  A little driving rain goes a long way.