Yesterday we sailed down from Urquart's Bay to Kawau Island after a week in Marsden Cove Marina.

A number of our friends were preparing their boats to be left on the hard in the marina and we came to visit and help out.  We also had a full week of wet and windy weather.  Even some the fishing boats came into the marina.  They often anchor out in Urquart's Bay but Gale force winds and threat of up to 7 metre swell drove them in. 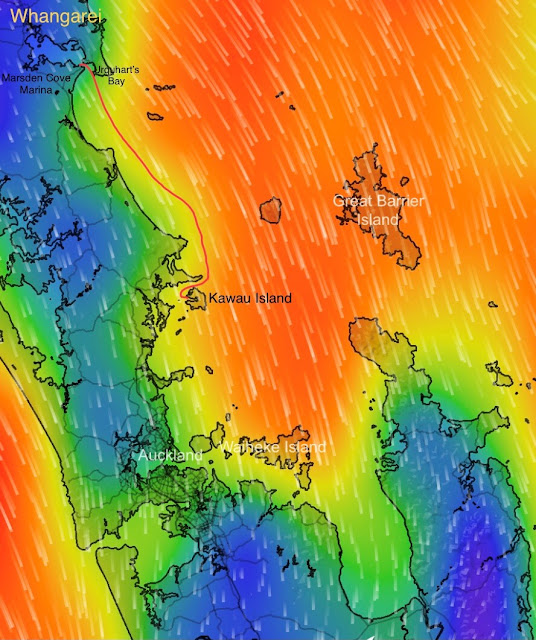 Our sail down yesterday was in a gap between weather systems. We arrived in the long well protected bay of Kawau Island in plenty of time for dinner and well before today's blustery conditions. This photo is from one of the Weather forecasting apps that we use with added route information. The course I've drawn is less direct than the one Tim actually steered.

Several weeks ago now, we visited friends, Rob and Jan, who have an olive orchard to help them harvest the olives. 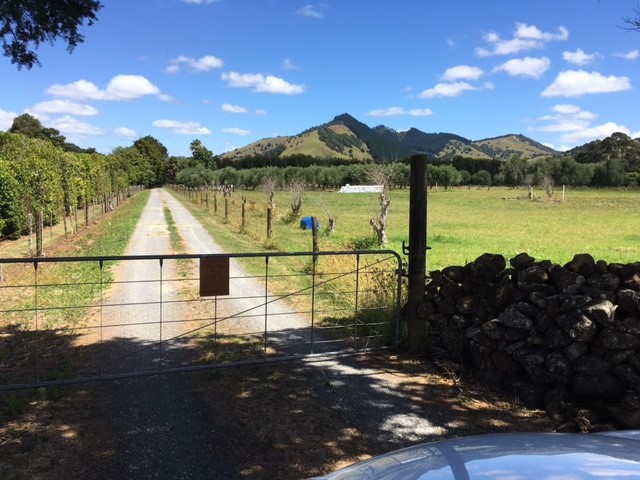 This photo was taken in December, which is Spring here, when Tim and I visited to look after their dog, Indy.  It's a lovely part of the country.

Rob and Jan had laid out the nets under the trees and had started picking before we arrived.  We had taken the wrong turning off the motorway and added a very pleasant hour to our journey on some extremely hilly and winding picturesque roads.

They have two types of olive one gives a creaminess to the oil and the other gives it a peppery bite. Together they make a very tasty interesting flavour.

There are a number of ways to remove the olives from the trees. The riper the olives are the easier they come off the tree, more oil can be pressed from them, but the more likely they are to be eaten by birds.

The trees were a mixed bunch. Some had loads of olives, some not so many. Some had all green olives and some had a mix of green and the riper black ones.  When to pick is not always a straight forward decision - see When do I pick my olives for more information. 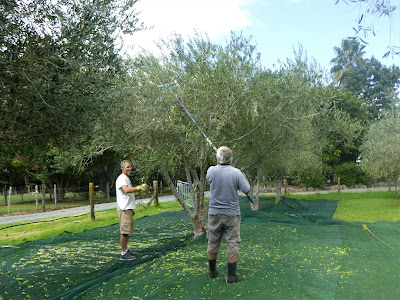 Tim picking olives and Rob using and electric rake to knock them down.  The rake vibrates fasts and shakes the olives off the branches.  This works best on ripe olives.
There is also a machine that that does it, but your olives would have to be really ripe for the machine to work well.
Most of the picking was done by hand, and Jan and Rob had a good of people to help over the 4 days of picking. 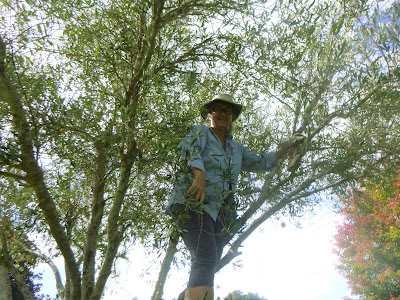 Having lots of people helping is good idea as, though it is very picturesque, it's also hard work. 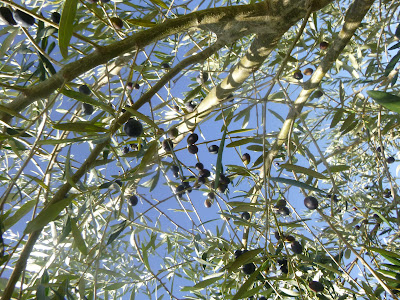 There is something about olive trees that is very special.  They are often planted in peoples gardens because they are such an attractive tree. They are even prettier with a scattering of black olives.
Tim and I first met in Greece back in '86 and next to the road between Frikes, where we lived, and the nearest village, Stavros, were fields of mature olive trees and old stone walls. This could explain why I'm so partial to them. 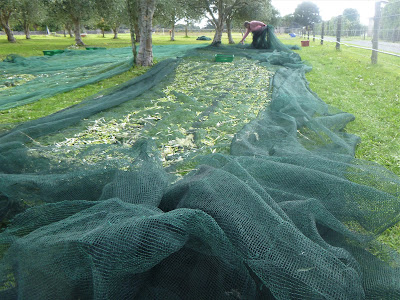 Once the olives have been knocked off the tree, the nets are gathered up and the olives are manoeuvred into piles. 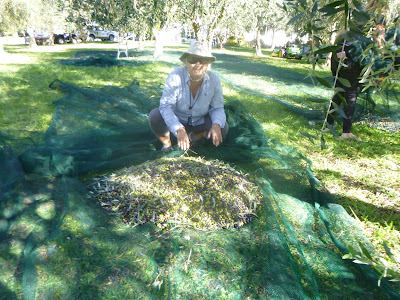 Olives are remarkably heavy and smaller piles are definitely better. 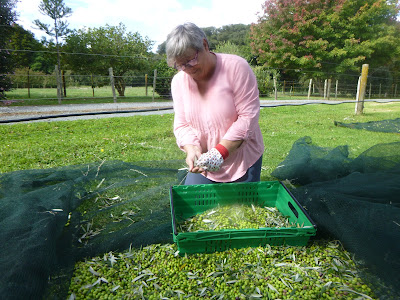 Jan gathering up the olives into the green baskets and picking out the worst of the branches.  Most of the leaves and branches are dealt by blowing them out of the olives before they pressing. 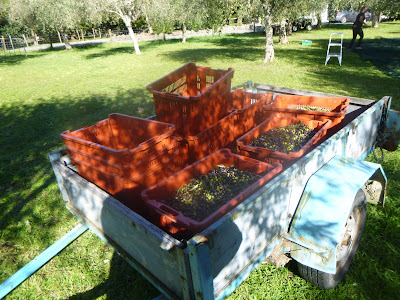 The green baskets are emptied into large orange baskets. 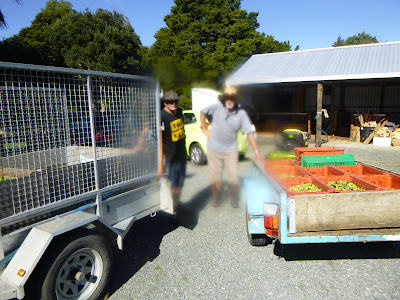 The orange baskets are transfered into the truck that will transport them the olive press. 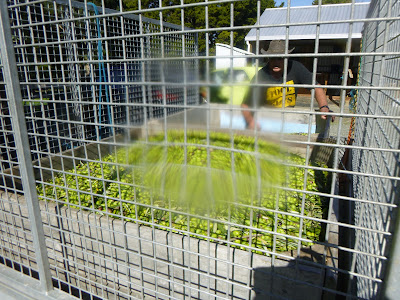 Once the olives are picked they need to be kept cool and dry and taken to be pressed as soon as possible.

You've probably notice a quality control issue in some of the photos.  Hand picking olives is oily work and no amount of wiping will remove it from your hands or camera lens.  My camera is water proof so no harm done but I wish I'd noticed earlier. The leggings I wore still have oily knees months later. 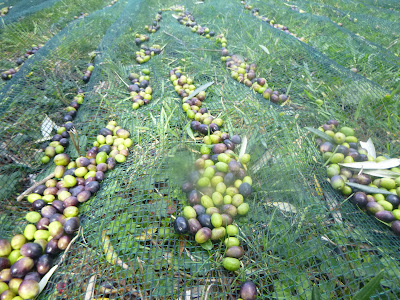 The pattern the olives formed in the nets as they weighed down the grass look just like the rippled sand you often see in shallow water at the beach. 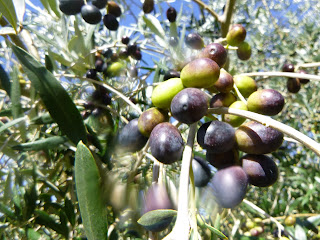 This was a good tree, loaded with olives.  It is very satisfying to pull your hands down the branches and to hear the heavy rain patter of olives hitting the ground. Very satisfying, indeed. 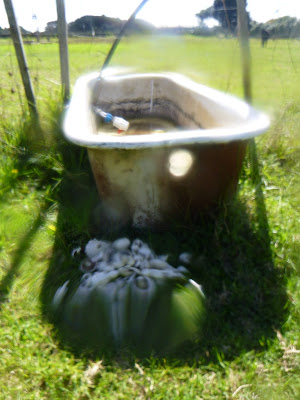 This photo of the watering trough for the cows and horse makes me laugh.
That it ended up looking like a psychedelic hallucination has everything to do with olive oil on the lense and nothing at all to do with the pile of field mushrooms Jan's daughter had collected and left in the shade of the trough.

From when I started this blog, we have now moved on to Waiheke Island.  We are well placed in a bay on the west coast of the island.  We have the ferry terminal to Auckland and we can catch a bus outside the terminal to tour to the island. Now we just have to wait for some more dry weather.