Hello.  All is still good with us.  We are back down in the Whangarei area for dental stuff, outboard repairs and provisioning.  Our Covid Level is back down to Level One across the country and there are no cases in the community.  We hope you can all keep safe and well where ever you are.

Blogger recently changed its format and photos are handled differently.  I can no longer 'drag and drop' whatever I fancy where ever I fancy, but I'm coming to grips with that.  I have chosen to post medium sized photos because if they are too large it makes adding text very slow.  All photos can be viewed in full size by clicking on them.

Sept 11 - We head north for Cape Karikari after a quick stop in Paihia for a few provisions. 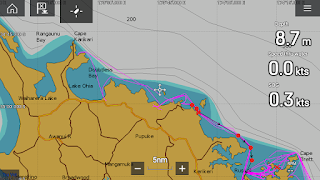 Just before Cape Karikari are two bays, Maitai Bay and Waikato Bay and we spent a couple days there with the anchorage to ourselves. 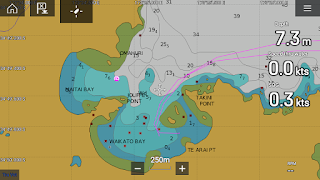 With quite a lot of swell in coming into the bay, we anchored in behind Takini Point. 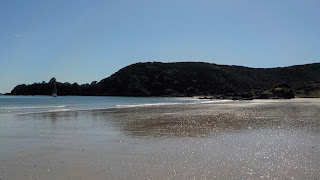 We rowed ashore and rolled the dinghy high up the beach.  Much of the land surrounding  the bay is Maori and we are only allowed access to the beach. This 'lobe' of the bay above is the only area where fishing and collecting shellfish is allowed. 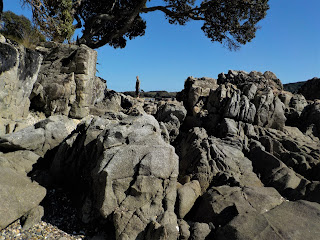 The walk around the bay was made up of long slices of beach with wonderful rocky outcrops. The tide coming in and going out has filled crevasses between rocks with small smooth stones.  It looked like a man-made path through a very rocky rock garden. 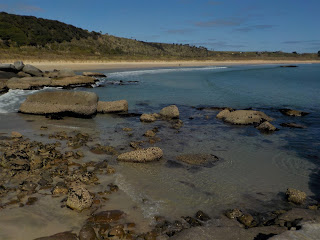 The sun is very low in the sky here still. It makes very dark shadows in photos and its hard to come to a balance with lighter shadows without washing out the photo.  That problem doesn't hide the clarity of the water. 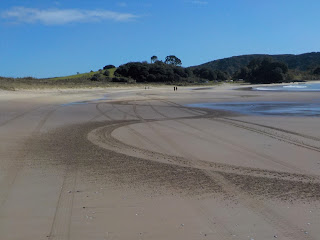 Someone had been having fun earlier in the day. 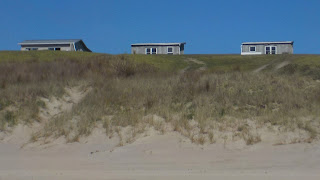 Long ago I read (and reread) a book called 'The Bone People'  by New Zealand writer Keri Hulme. Baches were often mentioned, but not explained and I was never sure exactly what they were.
These Baches (interesting link!) probably have a much better view of the bay than we had of them, but I liked the way they peaked out over the dune. 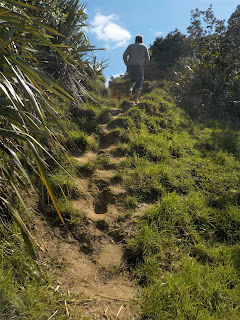 The path from Waikato Bay and Maitai Bay. 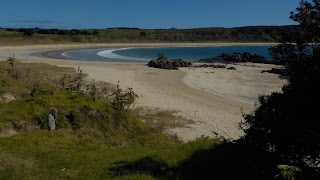 They really know how to 'do' beaches here in New Zealand.  With the tide out, there was a lovely spot of flat hard sand sheltered by rocks that would have been a magical place for a bit of yoga. Maybe next time once it warms up a little more. 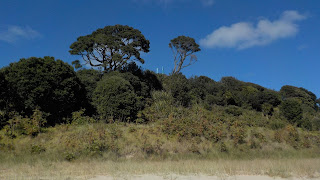 From the beach we could see two blue pouwhenua over looking the bay.  They are used to mark boundaries or places of significance. 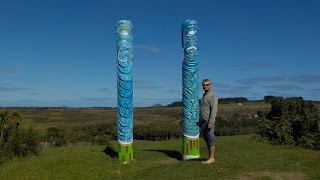 The sea viewing pouwhenua were carved on one side to look like sea monsters.  These were very unlike any we had seen before. 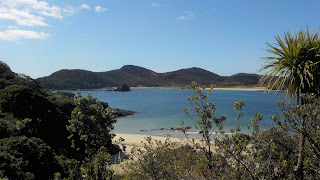 If they turned their heads to the right, they would look out over Waikato Bay. 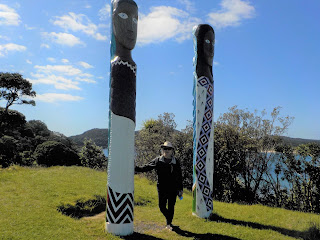 The inland facing pouwhenua were carved to look like women in traditional dress. Both sides were very different from those we had seen before. 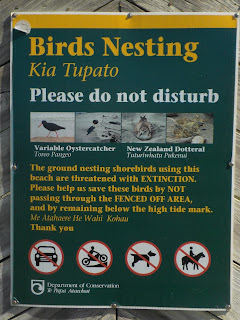 We often see Oystercatchers and Dotteral but not their nesting grounds. 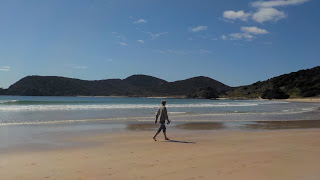 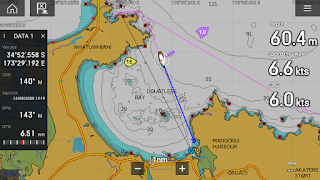 We had a wonderful sail across Doubtless Bay and arrived in time for a walk into the town. 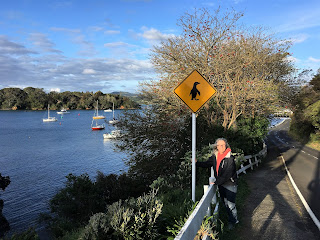 I was rather surprised to find that we only took one photo of our short time in Mangonui, and this is it -  the town Penguin Crossing sign.  We knew there were penguins in both the North and South Islands of New Zealand but hadn't run across any, probably because we didn't know where to look of what to look for.  Just before leaving Paradise Bay, we had met up with a boat we know called Ponyo. They told us how to tell Little Blue Penguins from Sooty Shearwaters.  Both birds float low in the water and look quite similar and black in the low sun, but if it swims away its a penguin and if flies away its a shearwater.  'No kidding,' might well spring to mind but penguins are usually seen in groups of three, and shearwaters in groups of hundreds.
Now that we know what to look for we have seen less than ten penguins and thousands of shearwaters.
View a nest live stream and learn more about the world's smallest penguin - Little Blue Penguins at The Department of Conservation - Te Papa Atawhai .  Its a great site and you can even find out what to do '...if you don't want noisy penguins nesting under your house.'
We planned to do more walks, take more pictures but it was not to be.
We now know that Mangonui Harbour isn't suitable in unsettled weather.  The harbour is small and the anchoring is very limited.  We spent an uncomfortably bouncy night when the wind direction changed and blew straight into the harbour against the tide.  The next day we decided to try farther into the harbour. We found a spot just out of the channel but the holding was so poor, the mud bottom so soft, that the anchor never dug in and just slid right through it.  After the third attempt we bit the bullet and re-anchored where we had spent the previous night.
We left the next morning for Whangaroa Bay.  It was on this leg of the journey that we spotted our first penguins.  There were three, as expected, and they just paddled on past looking like any small dark (with the sun behind them) water bird.  We now know what we are looking and hope to see more once we are back out sailing. 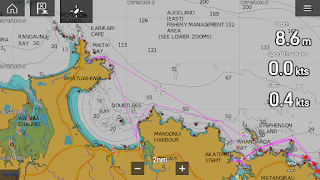 We met up with two boats we are very friendly with, 'Into the Blue' and 'A Capella of Belfast' and had a nice get together that evening on Into the Blue - blue hulled boat below. 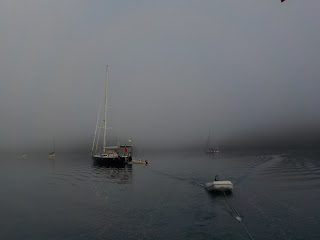 The next morning, the beautiful bay we were in had disappeared.  There was no wind and heavy fog. 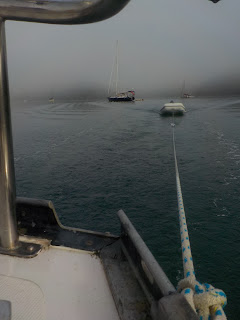 So we out our dinghy on a long lead and headed out of the bay. 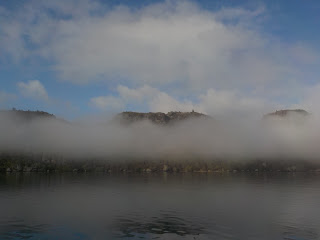 Even as we left the fog had started to lift.  We motored around to a bay we had visited before with the idea of staying over night, but with perfect wind and only a 5 hour sail back to Paihia, we anchored for lunch, take the outboard off, put the dinghy on the deck and arrived in time for dinner.