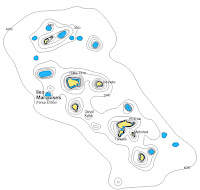 I should have done this right off the bat to give you a feel for where we are, where we are going and where we've been.

The only two islands not named are Fatu Hiva, the most southernly yellow blob, and Ua Pou, below Nuku Hiva, which we didn't stop at opting instead to have a horrible up wind sail back to Hiva Oa because we wanted to see Frances and Rob on Alia Vita very much. More about that later.

So now you can see Tahuata just below Hiva Oa.


Dolphins en route from Tahuata to Hanamenu Bay, Hiva Oa.  No matter how often you see dolphins it is never nearly enough.  They always raise your spirits no matter was the conditions around you. 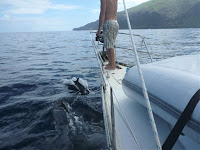 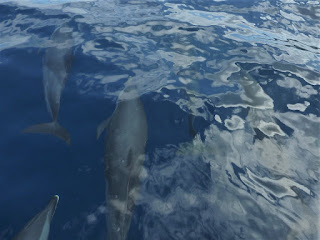 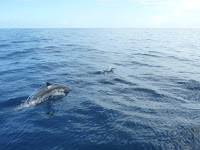 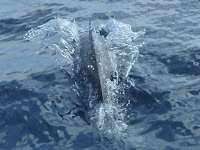 Hanamenu in Hanamenu Bay will always be remembered for the talented carver and his family of four who are Hanamenu's sole full-time occupants.  The population swells to eight in the summer when other family members join them. It will also be remembered for the sandflies that savaged me as I waited on the beach and then in the water to my waist for Tim to row back with the money to buy our Tikis.

The finger of the bay on the left is where we anchored for the night.  We rowed ashore as there was quite a lot of surf on the steep beach and it's much easier to carry an inflatable dinghy up the beach without its engine. 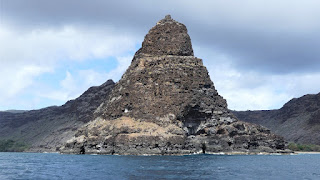 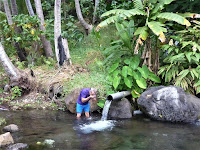 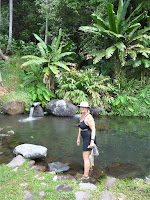 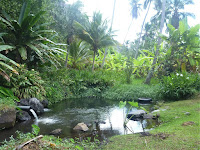 Matahau Point. The white speck on the left side is a shrine that you can walk to from the beach.  Ashore we found (as advertised) the pool created by the a small waterfall hidden in the foliage.  Tim drinking from rainforest waterfall is fast becoming and photo theme. As is me wearing my extra buoyancy bathing suit.

Unadvertised and therefore much more exciting was finding a local wood carver who showed us his work and his studio. 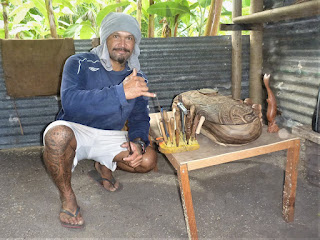 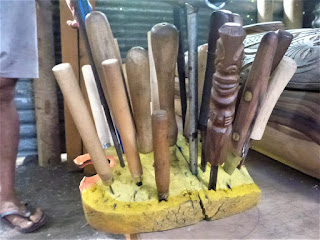 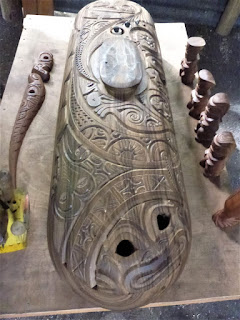 Oh man, the work was exquisite.  The carved box we a bespoke item for a New Zealand boat I think.  It was not yet finished and the handle on the top would become a turtle.  Of the Tikis to the right of the box, the second and forth from the top now reside on Larus.  We thought them a very good deal at about $15 each. (We met a boat we know who read our mini blog about this place and when they arrived the carver was sold out of Tikis much to their dismay) 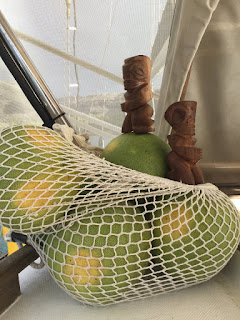 The female Tiki has long hair and the male Tiki a wedge shaped head.  So, very like us. :D

They kneel on the pamplemousse that sweetened the deal for us.

The wood carver pointed out the detail of the bent knees during our negotiations, which consisted of us offering $25 for two, the carver saying, 'No,' and then us saying,  'Well, how about $30 and some pamplemousse?' which went over much better.

Once Tim had rowed back with the money, he went back to pay for the Tikis and the carver asked if 'were we interested in a roast goat or pig dinner' and 'did we have any bullets?'  We would have loved to have a local roast meal but I wasn't getting out of the water for any reason at that point.

Since then, we have heard of meals being planned and then cancelled when the goat or pig was too far away up a mountain to retrieve if they did manage shoot it.

Wild pigs and goats were brought by European settlers/mariners and have created huge problems for the islands. The goats in particular will eat anything and everything they can reach.  Our next stop on the way to Nuku Hiva was Ua Huka, which had been completely defoliated thanks to goats in its not too distant past.  It has recovered now but I expect it took a lot of bullets.