It is hard not to be impressed with these islands and each one is different in some way from the last. 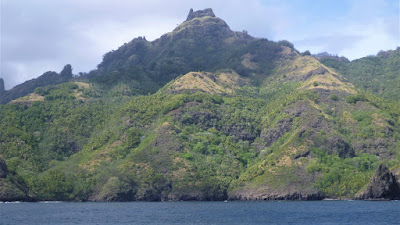 Tahuata felt massive as we approached it and it was fun to see the peak in the distance up close as we motored up the west coast.  All the islands have palm trees.  Some are cultivated for 'copra', which is air dried coconut flesh used to make coconut oil.  What always made Tim and I wonder was, 'How did some of those coconut palms get so far up the mountains slopes?'  In the second photo you can see palms by the waters edge in the bottom right hand corner, they are also groves scattered much higher up on some very steep slopes.  There are no roads in this area and the only animals you'd find are the wild pigs and goats.  We could imagine coconuts getting washed ashore on a high tide in rough conditions, but we could not image anyone or anything carrying them farther up the slope. We will just have to keep pondering. 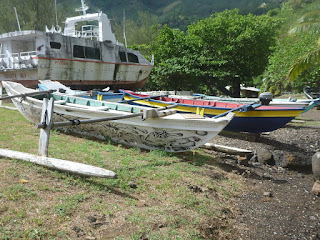 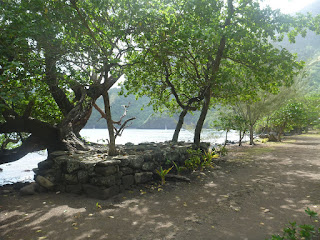 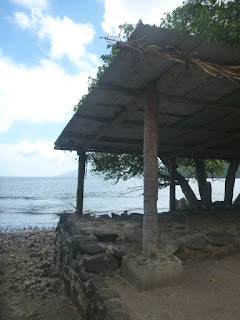 We really loved the village of Hapatoni. It truly felt like a garden paradise. It was cool, restful, clean and tidy.  There didn't seem to be a twig or a stone out of place.  I was particularly taken with the low tech solutions like the unshaped stone used in so much of their building. 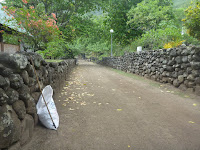 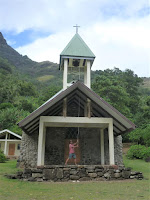 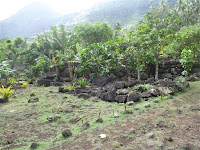 I like the examples of low tech living.  Clearing the roads of leaves with a trident spear and a bag.  Bell ringing the old fashioned way complements of Phillip, though of course he didn't.  School children and teachers at break eating mangos they'd just picked and we saw two girls using a couple rocks to smash open almonds fresh from the tree.  Living fences of flowering and fruit bearing trees that start as a shoot protected by a rock. Drying coconut for 'copra', which is sent off island to make coconut oil.

Fatu Hiva had a similar garden like feel to the village. The whole village was a garden of fruit trees and flowers. 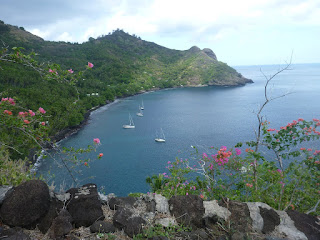 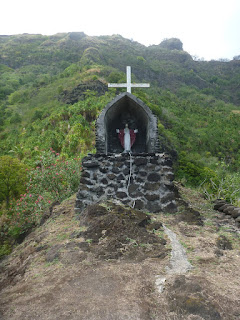 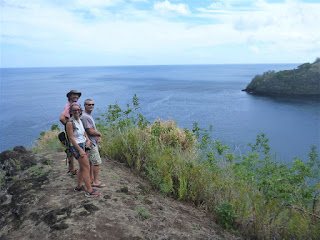 The views from and on Pointe Matauta. Its a nice walk along part of the islands only road though you had to tiptoe through the carpet of overripe mangos from the huge trees lining the way.  The smell was potent to say the least.

Not only is there marvellous flora there is quite a lot of fauna as well. 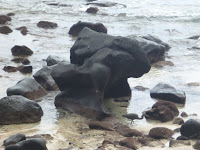 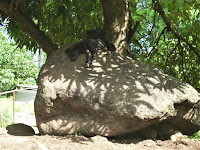 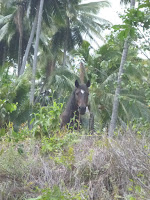 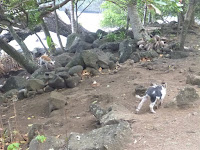 The beach is covered in wonderful volcanic rock and I was taking a photo of this natural sculpture when a bit of it moved and a black wading bird stalked off in search of lunch.  A cool black dog.   A curious black horse.  A black and white piglet at the end of its tether.  Black crabs at the dock going about their business until you approach and then scuttling away.

Random photos of things I liked. 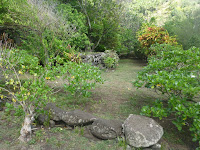 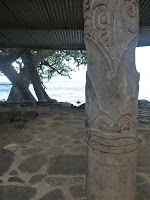 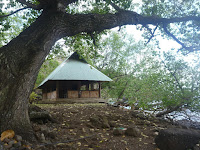 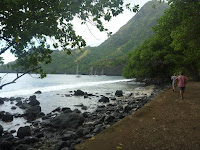 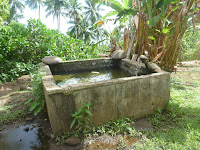 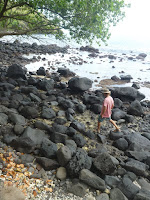 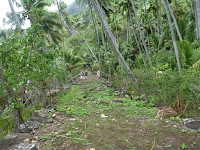 Manicured garden; Carved pillar with a Tiki face; A meeting place with woven walls; Black rocks and anchorage; An old watering hole; Black rocks on the beach; An old, pre-road at least, maybe even ancient walkway with Rob and Frances from Alia Vita on a second visit. It was quite a feat of engineering - poker straight, flat and, in better times, smooth that bridged a long gully 5 or so metres higher than the waters edge. 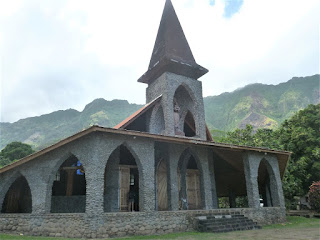 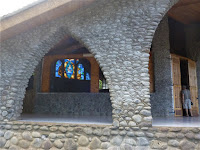 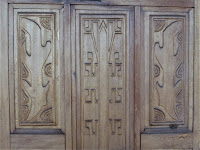 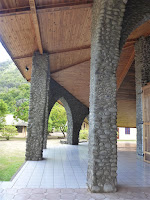 The church in the main village of Vaitahu, Tahuata. The wood and stone work was a marvel and the building was cool and airy - another impressive building.

An lastly from Tahuata, sort of a story. 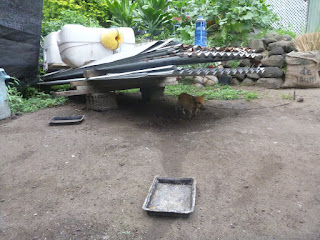 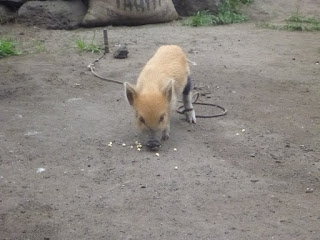 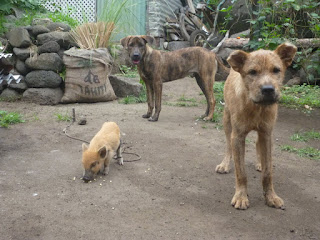 On our second visit to Hapatoni with Rob and Frances, I went prepared with some vegetable peelings and apple cores with which to tempt the piglets. I wouldn't just feed them without asking and asked at the house across the road from where the piglets were tethered.  The man I talked to spoke a little English and called me into the back garden to show me something.  It was a tiny piglet!  He made me understand that the larger pigs across the road could not be touched.  They were wild, but the little piglet could be petted and probably cuddled if that was your thing.  It was not mine however and the piglet was terrified of me anyway. It wouldn't come out from under it's hiding place until tempted with kibble.  I suspect if I wasn't there it would might even have played with the dogs, who come from a rather small gene pool, me thinks.

The man explained with words and actions that the wild pigs that live on all the islands, brought in by early settlers along with goats, are vicious and to get a piglet is very dangerous.  They must sneak up to the sow, grab a piglet or three and run like heck.

It was a fun and informative meeting. I was looking forward to sharing my bag of goodies with the piglets but was a little disappointed when they turned up their noses at the carrot peelings, cabbage and beans, though they did condescend to eat the apple cores.  I suspect the kibble is quite sweet and their tastes have been ruined for the healthier option.

So that is all from Tahuata and after first visit we headed to the North Coast of Hiva Oa to visit and give us a better angle to sail to the island of  Nuku Hiva.