Destination Florida - The Treasure Coast in the Sunshine State.

Despite our location on the map appearing to be off the coast of Daytona Beach, we are comfortably moored up in Stuart, Martin County, Florida. 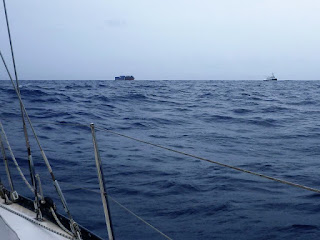 Getting here was, on the whole, a pleasant experience.  We really did have some good sailing.  We saw no other yachts but we did have some company.

This is a tug towing a barge full of containers from the US mainland, probably somewhere in Florida, to Puerto Rico.

When one or the other of us is on watch throughout the night, we see a lot of sunrises and sunsets.  This sunrise, as we sailed along the northern borders of the Bahamas, was a little different and, I think, worthy of note. 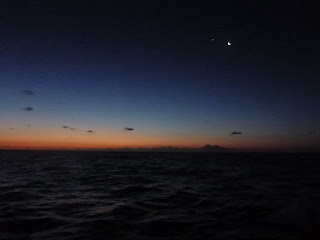 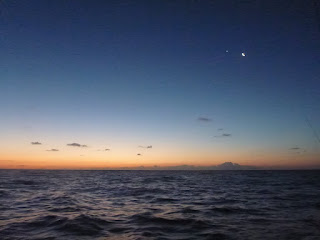 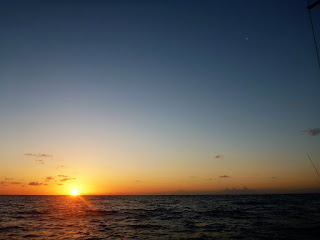 In the false dawn, that time when the sky begins to lighten but before the true beginnings of sunrise, we could see the waning crescent moon in the company of a single very bright star, which I'm guessing is Venus.  What I particualy enjoyed was watching the moment when the light of star and moon was eclipsed by the rising sun.  You can just make out the moon in the last photo.

The Bahamas covers a huge area of wispy looking islands and we sailed through it's northern waters for several days. 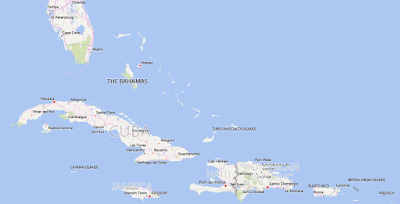 We stopped briefly in the northern most island of Abacos. We called in with the view of waiting out some weather much farther up the East Coast, which would have affected us if we'd carried on north .  We downloaded the latest weather and found that there wasn't a favourable weather window for the next week to continue north and we had to make a choice.  We could stay in the Bahamas, which would mean paying $300 for a 6 months cruising permit and stay only a week or up anchor and head for Fort Pierce on the 'Treasure Coast' of Florida.  Florida it was.

Our decision to leave was not completely financial.  We also took into consideration crossing the Gulf Steam which was a new and exciting experience for us.  The Gulf Stream is a warm current which travels up the East coast of the US at 2 to 4+ knots before heading over the to the UK where it keeps them warm despite their northerly location.  Conditions weren't ideal, but definitely do able - we were a little too far north and although the wind was from a good direct, the South, it was 16 to 20 knots, which might make the trip a little livelier than it would be otherwise.  Also, the latter half of the journey would be at night, but we'd have entered the Gulf Stream just before dusk and sailing at night is much the same as sailing in the day, only darker.  ;D

If we'd planned on heading to Florida from the outset we would have stayed south of the Bahamas which would have given us a good long angle to make the most of the Gulf Stream and to exit the stream close to Fort Pierce.  We'd chosen Fort Pierce as our destination because it is one of the few ports with an all weather deep water entry.

We beat as far south as we could to a Gulf Stream entry point, which we heard our weather guy tell a subscribing boat.  Subscribing boats can radio in after a forecast and get advice specific to their location and situation.  It was really interesting listening to Chris Parker 'weather route' yachts heading East across the Atlantic - where to find the wind, when head north, south, east or west to avoid excessive or insufficient wind and when to motor or just sit and wait for conditions to change.

Once near the entry point, we turned to the west and entered the stream.  We think now that the large short seas were caused by the Gulf Stream brushing up against the shallow water near the Bahamas.  Our only complaint was that when these short seas met our bow it would send a barrel full of water over the sprayhood and into the cockpit, randomly soaking Tim mostly.  This decreased the farther we got into the stream despite the speed of the current increasing from 2 to over 4 knots.

It took some experimenting to find the most efficient and effective angle toward our exit point from the Gulf Stream.  It is a faster and easier journey if you head with the current to some extent.  We were at times heading north of Fort Pierce in a 4.8 knot stream but as we approached the western edge that tails off and we were able to point more directly.  If you wanted to point directly to our destination, you could find yourself pointing up stream while you were carried down stream, which is a very weird feeling.

So 1/3 the way across we were settled in and Tim went down for a snooze.  About an hour into my watch, there was a loud crack and the jib started to luff.  I gave the jib sheet a pull to bring it in, but the sheet kept coming and the sail kept luffing.  First thought was that the jib sheet had snapped.  No problem, there are two and once Tim was back on deck, we investigated moving the port sheet over to starboard side.  Good idea, but that port sheet wasn't attached to the jib either! 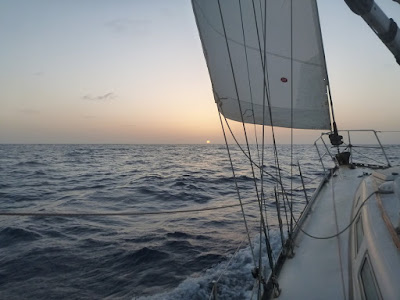 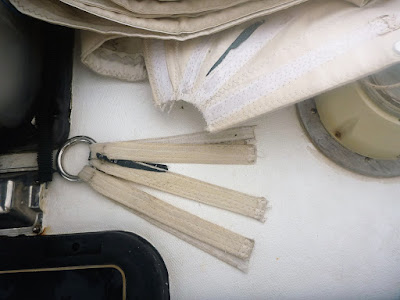 On the right are the two jib sheets attached to the clew of the jib - this photo was taken at sunset two days after leaving Puerto Rico.  On the left the clew in two pieces.  It appears that he stitching simply failed.  Both the sail cloth and they tape that attaches the ring were in good condition.  UV light can breakdown all sorts of thread and fabric.  The most of the sail is protected when rolled up by a sacrificial strip of fabric stitched to its outer edge; the clew sticks out the bottom and is not.  The sail was made back in the UK and the thread used might not have been UV resistant.  The repair definitely will be and we've asked the sailmaker to look out for any other problem areas.

Our plan on arriving in Florida was to head North as soon as possible. The time estimate for when we will have the sail back is 2 to 3 weeks, so we've settled into dockside life in the town of Stuart.  We have been making sad eyes at the sailmaker in the hopes that it will be done sooner but we're not holding our breath. Mack Sails is the best and therefore the busiest sailmaker in the area. 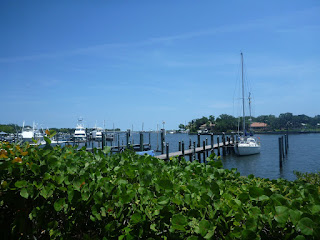 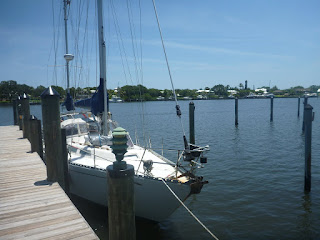 This jetty has been our home for the previous and up coming few weeks.  We were offered the use of the jetty through a chance encounter in the BVI and it really is enabling us to do so much more work on the boat during our time here.  More about that later.

In the meanwhile we have been sightseeing with friends made on charter in Antigua.  Barbara and Laura Kay are showing us around their bit of Florida and much more about that in the next blog.