We're still in Stuart with our newly repaired sail and are getting ready to head north for Newport, Rhode Island tomorrow. We're a little behind our sailing schedule and need to get north for the hurricane season and simply to have time north during the summer months.  We hope to visit places like Charleston on our way back south in the late autumn, as I'm sure you can appreciate that that is a long way off and any and all plans are more of a work in progress than fixed in stone.

The forecast for the coming week starts with little to no wind but should improve after a couple days of motoring. *fingers crossed*  We've filled up with fuel and have contingency plans in case we have to motor longer than expected and need to refuel.  We will have the help of the Gulf Stream scooting us north at two knots plus.

We've really enjoyed our time in Stuart.  It is so similar yet so different from the Caribbean.  We still see the palms and brilliantly red Flamboyant Trees but in Florida's steamy wet low-lying areas, much of the flora and fauna have a different flavour. 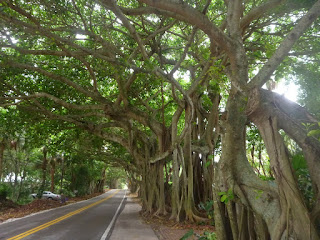 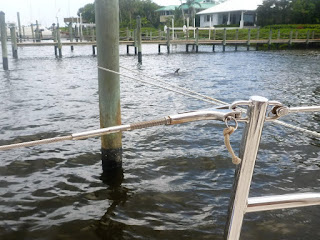 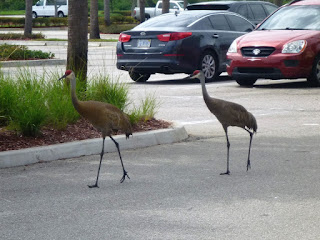 South East Lucie Boulevard's famous stretch of Banyan Trees; Dolphins are our neighbours - and they were huge compared to those we are used to seeing; Sandhill Cranes slowly and with great dignity promenading through the carpark of the BassPro shop - the most enormous fishing, hunting and water sports store we are ever likely to see.  The lady who identified the cranes for me told me she saw babies about a foot high in the Walmart carpark. These were at least three feet tall.

Last week we had a second outing with Barbara and Laura Kay.  Laura Kay took us to visit Gilbert's Bar House of Refuge. 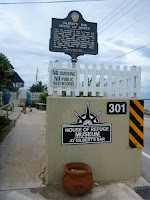 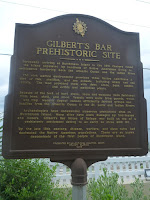 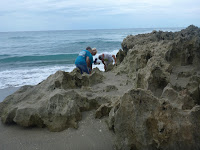 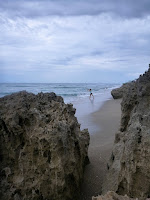 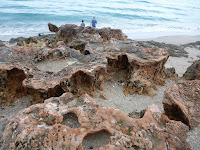 Gilbert's Bar House of Refuge Museum; Europeans were not the first people to appreciate the Florida's Treasure coast; This is the 'before' photo (see wave approaching) but I missed the 'after' photo, which only resulted in wet to the knees; Fishing is not just a pastime it truly is a way of life here; This rocky coast gives you an idea of how the inland waterways came to be and how they survive existing cheek by jowl with Atlantic Ocean.  The rock is honeycombed with eroded voids, covered with a pitted crust and topped with naturally formed 'footbaths', which are very useful for rinsing the sand from your feet. 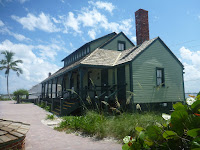 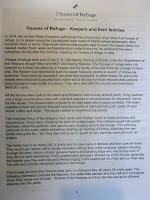 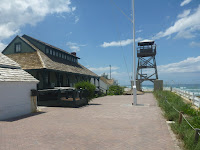 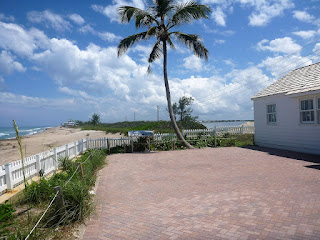 The Refuge - the ground floor was where the keepers and their families lived and the top story was setup with cots for those rescued; Looking north past the watch tower; Looking south toward the Atlantic and its crashing waves coast and calm waters of Intercostal Waterway.  I have to add that the ICW isn't a mill pond by any stretch of the imagination.  It is strongly tidal with wandering ever-changing channels with hard to spot banks in murky water. 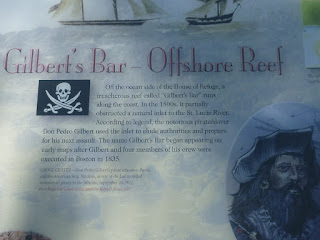 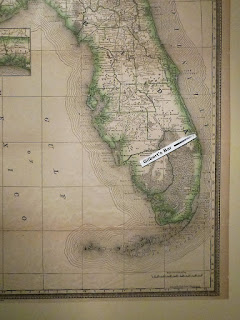 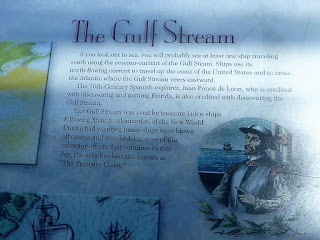 You can click on any of the photos to enlarge them.  Some history taken from the really wonderful displays throughout the Refuge. 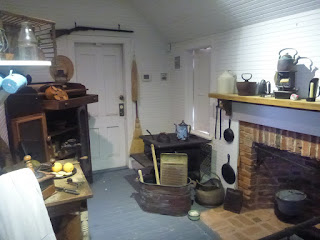 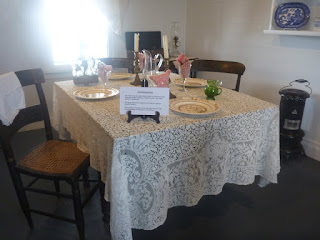 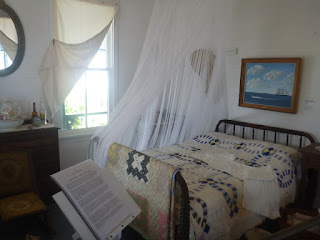 Kitchen; Dining room; Bedroom.  The painting you see on the wall above the bed was painted by Laura Kay's father.  Curt Whiticar was a prolific painter of the waterways and the boats that sailed on them.  Many of his works are displayed in the refuge and add greatly to the mood of the exhibits. 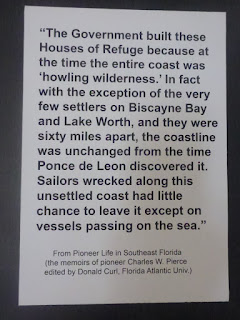 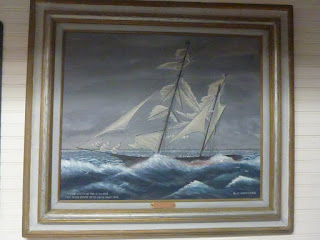 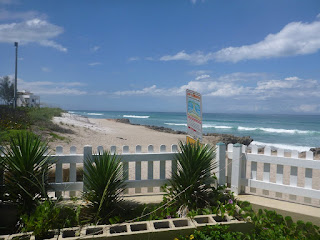 The Wreck of the J. W. Lane by G. C. Whiticar.  On shore, sign posts pointing to the distance and direction to the refuge to the north and to the south for those lucky enough to make it to shore.  This stretch of the Florida is known as the Treasure Coast with good reason.  There was, and probably still is, treasure to be found up and down the coast.

We are very grateful that modern sailing is a quite a different experience now with up to date weather information, navigational aids and radio communications.

And on that note we're are making our preparations to head north.

As we've been stationary for several weeks, Tim knew Larus's hull would need a scrub to get rid of any growth. When we slipped out lines and manoeuvred out from between the jetty's piles, we could feel that Larus was not gliding through the water as she should.

The water is quite murky and we hoped to find it cleared outside the Pocket.  We did not.

It took some time and two minor groundings - (we went THUD into an abrupt bank at the edge of the dredged channel.  The depths on the charts aren't particularly accurate - not surprising really due to the soft sediment, dredging and strong tidal streams all helping to redesign the river bed) - to find a spot suitable for Tim to get in the water to wipe down the hull and clear the water inlets and outlets of growth. 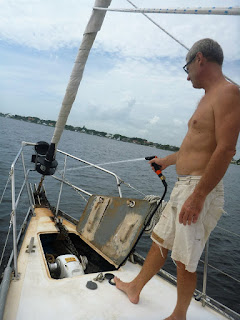 We use a dive tank, which remains on the deck, and a long high pressure hose with a regulator to breath, which allows Tim to spend more time cleaning and less time free swimming.

Conditions weren't ideal, the water was still very murky and the current could be quite strong, but despite what the chart said, it was shallow enough for Tim to stand on the bottom which did help.

All done, we got ready to head back to out mooring in The Pocket.

Getting the anchor up, I was quite excited to watch the new deck wash in action.  Sadly, it came up as clean as it ever has, but this is how we'd us it, to rinse off mud before the chain comes on board.

And finally, I leave you with a short video we took on the way back onto Manatee Pocket.  Boating and fishing is a way of life here and the waterways are just as busy as the roadways.

How much fun is that? :D

Shortly, we'll be hitting the shops for a little provisioning.  Our passage to Newport will take about seven days. We will blog and update our latitude and longitude as we go via the SSB radio, and we will post any photos once we get there.  See you then!
Posted by Tim Chapman at 12:36