Today is the 27th of June and for the first time in 4 years, we tried the diesel heater and it worked! This was completely unexpected. It's probably not cold by many people's standards but it's about 15 degrees Celsius cooler than we're used to. We've had the duvets on the bed since we got here and last night we piled the blankets on top of them.  We've been told weather is unseasonably cool and are looking forward to when the temperatures start to rise.  We're probably being a little whimpy but it really is a big change for us.

The weather we've experienced since our arrival has been quite different to what we've been used to.

Arriving in Newport just over a week ago, this is what we saw. 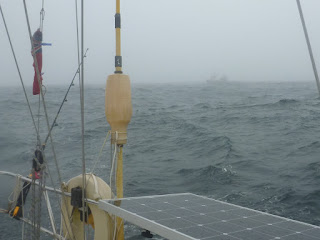 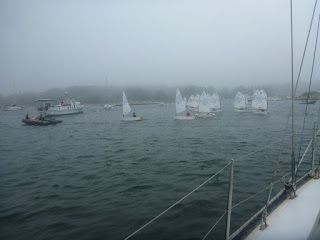 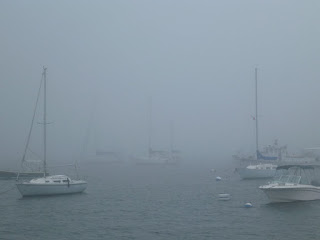 Fishing boat off our stern approaching Newport; Optimus dinghies sailing through the anchorage - they sail in every sort of weather.  Those kids are tough!; Larus from the shore, just seen through the fog. What I'd forgotten about fog is how wet it is.  We've been getting a lot of condensation in lockers next to the hull that have little insulation from the cold outside. 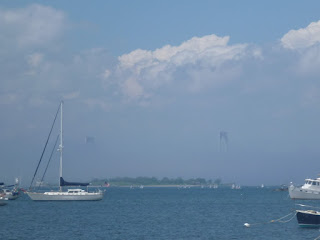 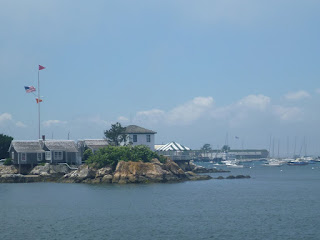 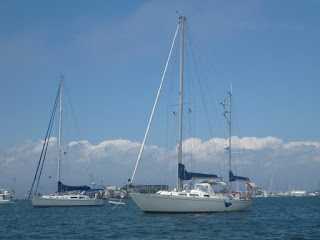 The magic bridge held up only by clouds between Newport and the mainland; The Ida Lewis Yacht Club where we watched a squall go through the anchorage with torrential rain, hail and wind from every quarter.  All the yachts in the anchorage and on moorings in tandem swung slowly through 360 degrees as the squall passed; Larus on a clear bright day.

Newport is an historic city founded in 1639 on Aquidneck Island.  It's famous as a centre of yachting and for it's historic mansions. 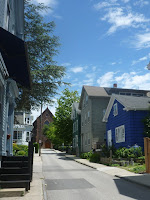 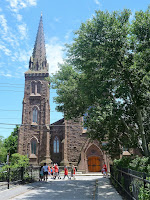 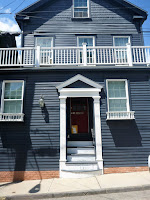 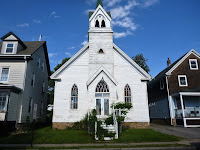 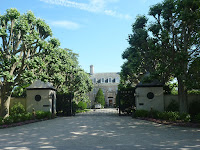 A variety of buildings we spotted while walking to the Stop and Shop Supermarket and across the island.  The last is one of the many mansions we passed. 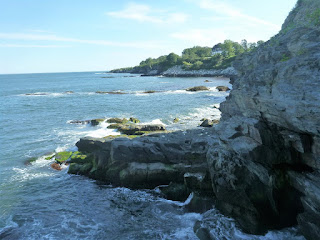 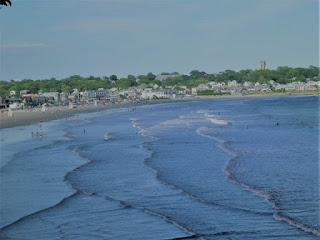 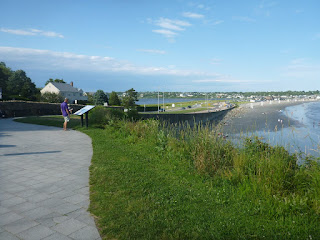 The road we walked to the Eastorn Cliffs (above) was lined with mansions and the path running along the coast in both directions was as well.  Most were hidden behind dense hedges.  Eastorn Bay ends in a huge semi-circle of beach with long strings of waves for the swimmers to play in.

I've been enjoying the local floral; some is very familiar and some is brand new to me. 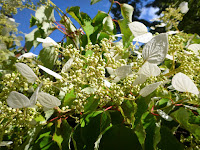 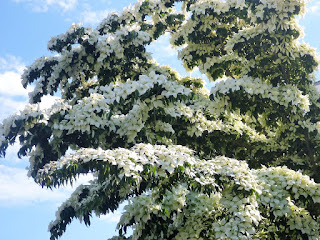 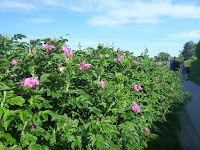 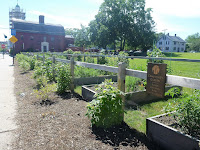 I don't know the name of the first tree which seemed to be flowering with pretty white leaves and buds; Kousa Dogwood is the second tree which looks like its branches are heavy with snow; The wild roses were along the Eastorn Cliffs path and smelled wonderful.  They might have been planted there to discourage walkers from climbing down the cliff face. They were very thorny.  There were many notices suggesting that climbing down the cliff so was a really bad idea; And lastly, in the Broadway area of Newport was a really well organised and maintained allotment.  The Broadway advertises itself as 'Where the Local People Live'.  It has a very different flavour from the streets that lead off the waterfront.

We finally completed one task that we kept forgetting about until the next time we hoisted the mainsail.  Our main is fully batonned with four long batons in four long pockets on the sail.  For some reason or other the stitching at the end of the pocket had come apart and needed redoing.

At the last Southampton Boat Show, Tim had bought a sewing awl - The Speedy Stitcher - for heavy fabrics.  I'd tried it a couple of times to get the knack of it before tackling the sail. 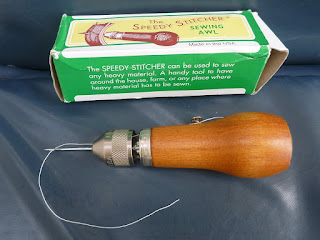 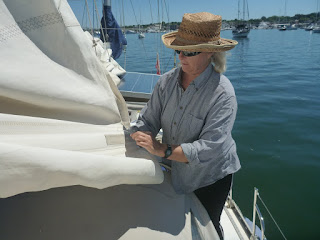 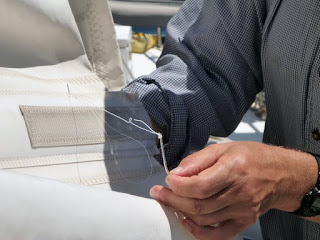 It wasn't particularly speedy and it was helpful to have Tim feeding the end of the thread through the loop that gets pulled back through the fabric.  We'd just about finished that last pocket when I broke the needle and decided that in fact we were finished.  Three new needles arrived today so if we do need to do more stitching we're ready for it.

As pleased as we were to finally get that job done, as the temperature tonight is forecast to drop to 14 C or 59 F, we're both much more excited about getting the heater going.

And last and most definitely least, a series of videos of our approach to Newport last week.  A good friend has suggested that we should create a video blog, get thousand of follows, then sponsors and fame and fortune.  I'm not so sure that's likely, but they did make me laugh.