We're getting used to the very different weather conditions we are finding here in Stuart, on the East coast of Florida.  The weather seems much bigger and comes from unexpected directions.  The first rain squall we saw in the distance while crossing the Gulf Stream looked like a big hazy lump of cloud.  It didn't have the distinct structure we see in the Caribbean squalls - a bulbous body with a skirt of spindly rain legs - so I'm not even sure now that it was a squall and not just a big cloud.

It never feels like the weather is bearing down on us, even on the jetty.  Mostly it just passes by, threatening to rain but seldom following it up.  Until these last few days that is and, man, has it rained. Even the pelicans looked unhappy hunkered down on their wood pile.


They do make the most of it though and you can see the pelican on the right opening and closing its beak to drink the rainwater.

When it's not raining, we've a bout of leak fixing and, making a cover for the saloon hatch so it can be left open in all but the heaviest down pour.  Thanks to Madeleine on 'Sarah Lane'  I had one piece of canvas that was actually waterproof.

The most exciting job was Tim fitting our new deck wash. The anchorages, particularly in the ICW - Intracoastal Waterway- can have very muddy bottoms and if we don't rinse it off we'd end up with a lot of smelly mud in the chain locker under our berth. Tim installed in the anchor locker for salt water rinsing of mud off the anchor as we bring it in.

It's plumbed into the inlet for the forward head, which we use as closet rather than a bathroom.  The pump if fitted to the bulkhead under our berth and the hose lives in the anchor locker.

Last weekend was gloriously sunny and we were taken to the Wakodahatchee Wetlands by our friends, Laura Kay and Barbara. 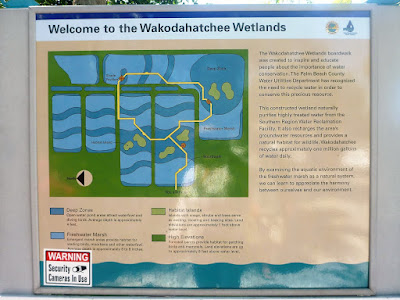 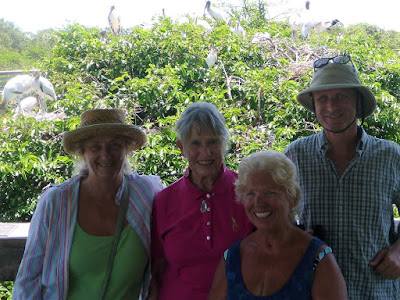 " The Wakodahatchee Wetlands, opened since 1996, are located in Delray Beach at 13026 Jog Road. Constructed on 50 acres of previous wastewater utility property. The created wetlands are free and open to the public. Wakodahatchee features a three-quarter mile boardwalk that crosses between open water pond areas and islands with shrubs and snags to foster nesting and roosting.

The boardwalk has interpretive signage as well as gazebos with benches along the way. This site is part of the South section of the Great Florida Birding Trail and offers many opportunities to observe birds in their natural habitats. Over 178 bird species have been identified there, along with turtles, alligators, rabbits, fish, frogs and raccoons.

Each day, the Southern Region Water Reclamation Facility pumps approximately two million gallons of highly treated wastewater into the Wakodahatchee Wetlands, which in turn acts as a percolation pond, returning billions of gallons of fresh water back into the water table."  From the Palm Beach County website.

The first critters we encountered having just taken a few paces along the wetlands were Soft Shelled Turtles lurking in the mud. They were very unlike the turtles we're used to seeing in the Caribbean. 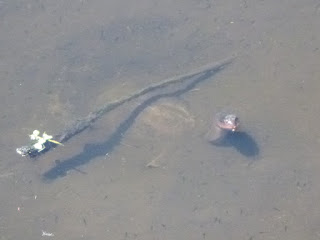 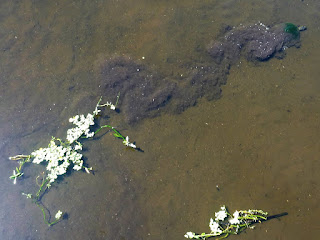 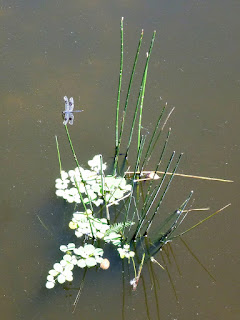 A Soft Shelled Turtle doing a good impression of a snake; The same turtle on the move was very easy to spot thanks to the silty lake bottom; The one dragonfly of many that I managed to photograph.

The video below is of the noisiest and most numerous inhabitant of the wetlands -  the Wood Stork.

We heard them long before we saw them.  Barbara comes here often and has been watching the young storks from egg, to out growing their hatching nests, to becoming sullen demanding teenagers.

It's amazing that this wetland exists so close - you can see a roof in the middle of the photo - to human habitation. 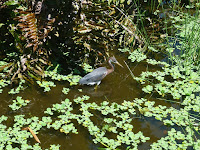 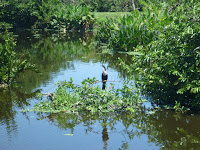 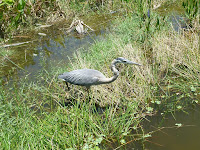 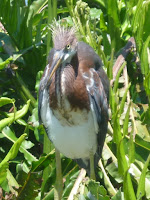 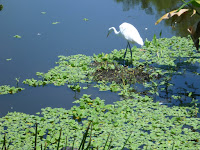 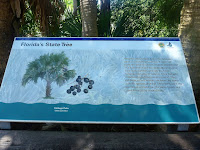 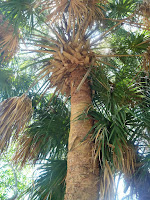 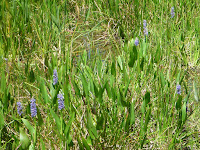 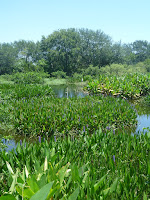 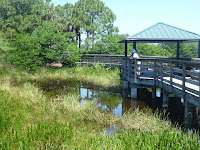 Florida's State Tree; The Cabbage Palm: Little blue flowers; Wetland flora; One of the shaded areas of the wooden walkway for which we were very grateful - it was hot. 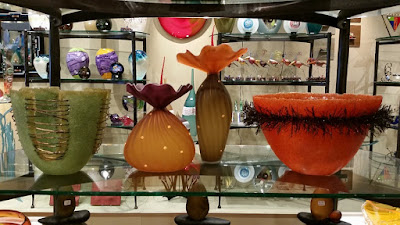 After our walk around the Wetlands, Barbara took us to Del Ray Beach where we visited the Avalon Art Gallery.  I must say that their website doesn't do justice to all their amazing displays of glass sculpture and unique jewellery.

This photo pinched from their Facebook page is much more representative of what you can find there.


Next we headed to Kilwin's for ice cream.  As we approached the shop, we could smell the caramelised sugar and spices from their freshly made waffle cones. 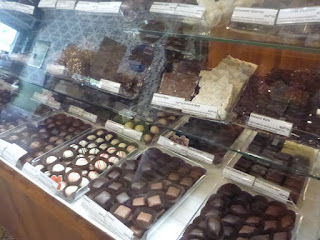 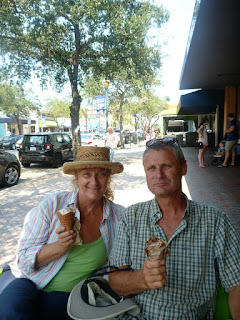 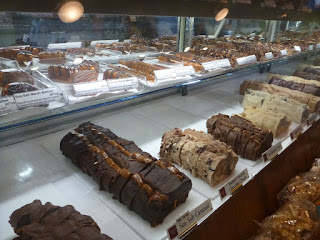 Chocolate bark and individual chocolates; Happy campers on Delray Beach Main Street - the waffle cone and ice cream were just as good as we imagined; Kilwin's marshmallowy and fudgy goodness.  Later in the week, we discovered a Kilwin's in downtown Stuart and tried some of the chocolate fudge.  We were not disappointed.

We finished off the day with a walk down to Delray Beach.  It was Memorial Day Sunday and judging by the footprints there had been a lot of people on the beach earlier in the day.  Most now were groups of students.  We dabbled our toes in the water and found it 'bathwater' warm.

It really was a marvellous day and we were so fortunate to have local friends to show us places we certainly wouldn't have seen without them.