This is very late in coming but we cannot neglect the wonderful time with had in Grenada with our niece, Izzy. 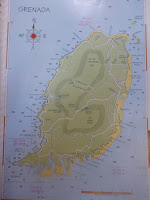 We arrived in the middle of September which is well into the peak of the hurricane season. Grenada is very low in the hurricane belt and although hurricanes aren’t unheard of, but they are much less likely to occur than farther north in the Caribbean as we saw in early October when Hurricane Matthew devastated Haiti and wreaked havoc from Cuba to South Carolina.

We anchored off St George on the West coast and then moved around to Prickly Bay on the South coast when the swell came in from the north and made the anchorage untenable.

Grenada isn’t know for its snorkelling with the exception of one site off Molinere Point.  The area is an Marina Park and is famous for its man made (no pun intended) reefs. 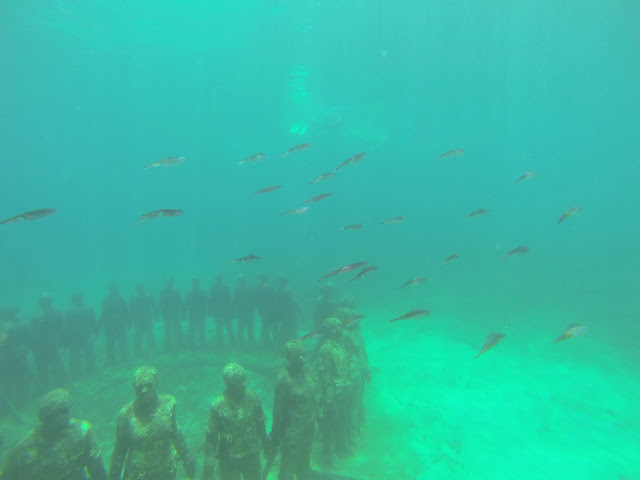 This is a spot where boat tours bring groups to snorkel and see the sculptures – there were many more sculptures of people sitting at desks and the like, but they were too deep for good photos.  They must feed the fish during the tour because we have video of a variety of fish, mostly Sargent Majors, right up in our faces hoping, I’m sure, for a hand out.  We were also treated to schools of squid. 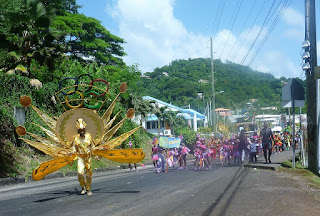 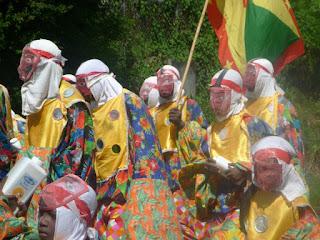 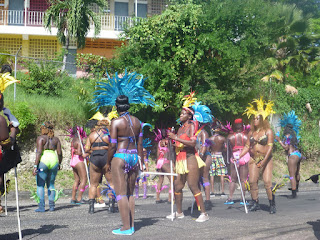 We watched the Grenada Carnival Parade wind its way through the Carenage, which is where boat used to be careened way back in the good ole days.  Most islands have an area named Carenage. 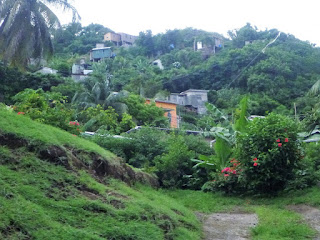 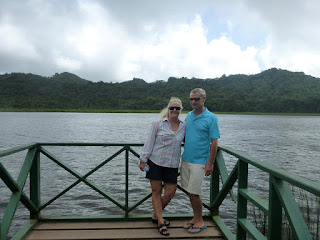 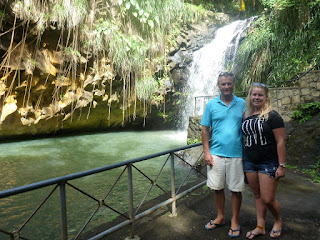 Our niece Izzy lives in Grenada and gave us the grand tour of the island.  Grenada is quite mountainous and many of the homes appear to be precariously perched on the slopes.  It is an island of waterfalls and of crater lakes. 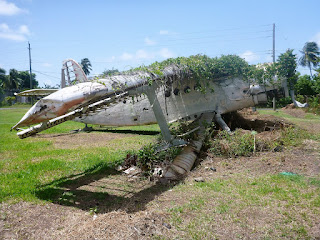 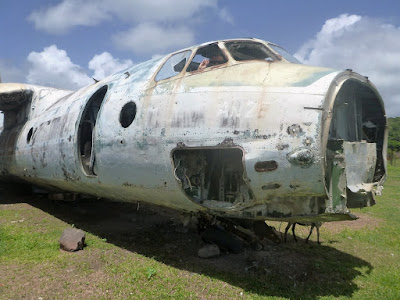 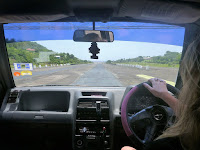 Relatively recent history can be seen at the disused airport in the north of the island.  One plane is American and the other is Russian and are left over from when the US invaded Grenada in 1981.   If you look closely you can just make out our wannabe pilot Tim in the flight  deck window. The locals drag race on the disused runway these days. 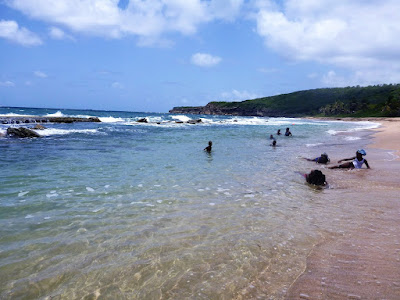 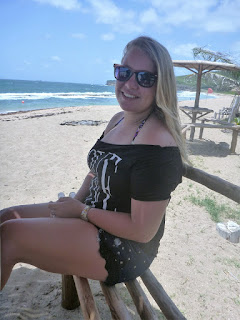 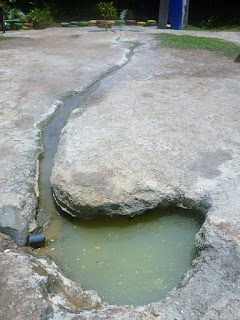 This windward beach would have been far too rough for swimming, but you can see the rocky reef that makes it the perfect bathing area.  We watched the swimmers from a little beach bar with Izzy.  Another really neat thing she showed us was the sulphur pools in the interior. 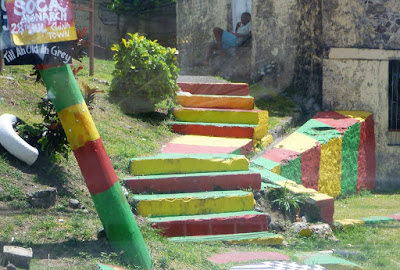 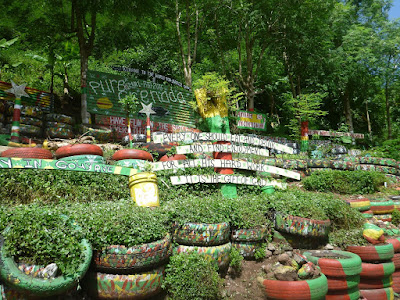 Grenadians are proud of their country and part of the celebration of Independence Day was to decorate the island in red, yellow and green. 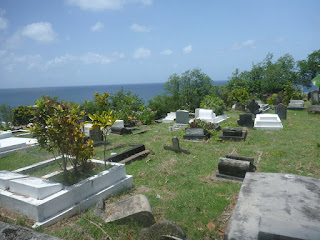 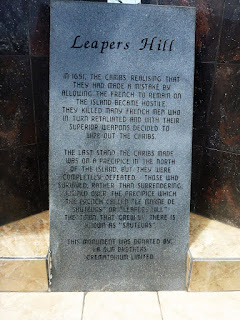 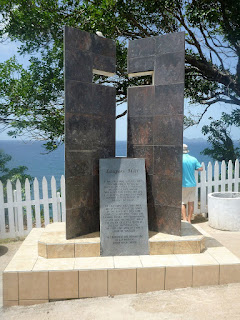 Leaper’s Hill was a tragic  part of Grenadian history and commemorates the futile last stand of the local Carib Indians. 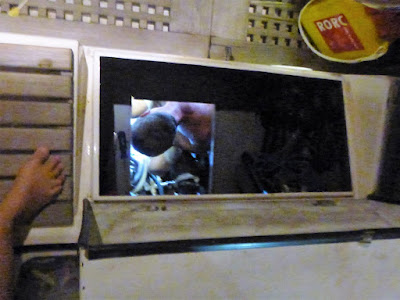 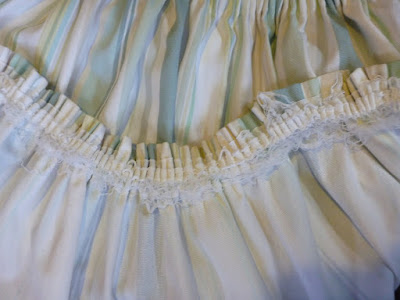 This was kind of a neat photo of the poor ole Captain in the engine room fixing for the umpteenth time the pump that keeps the fridge cool. I am looking into the engine room through a hatch cut into the bottom of the cockpit locker. That issue has now been pretty much sorted out, with the final (fingers crossed) fix of moving the compressor out of the engine room and into a saloon locker on Tims list of things to do.  One of my chores involved replacing the curtain tape on our bathroom windows.  The fabric of the curtains is in great shape but the curtain tape had just disintegrated from the UV rays. I bought more 1 inch tape in Canada as I couldn’t find any in the fabric shops in Port of Spain, Trinidad.  I wasn’t until I asked in Trinidad where to get velcro strips and I was directed to a haberdashery that had every button, zip, fasterner, belt bucket, bit of lace/fringe, beads, needles, pins, etc and the elusive curtain tape.

We sailed for Trinidad with David, Donna and Coco on Merlin 2.  I have no photos of David and Donna but I do have more than I should have of Coco. 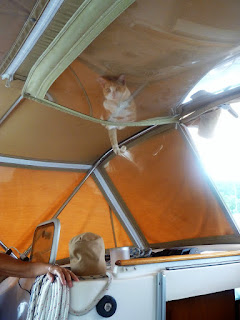 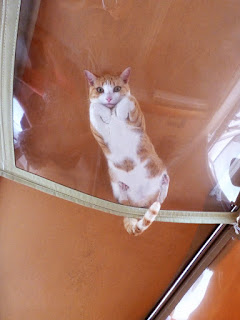 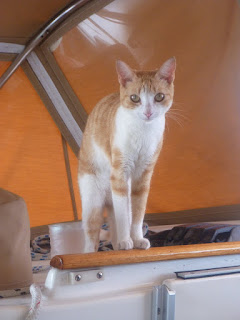 Do you blame me?  She is the tiniest most standoffish of  moggies with a very direct stare.

Chaguaramas doesn’t change much from year to year but it still has a certain charm.