Imagine the following being read in the suspenseful  tones of a  BBC documentary voiceover (where I pinched the facts from), interspersed with photos of spectacular rapids and waterfalls, close ups of rainforest, savannah, river and flora and fauna and a lot of very excited biologists cataloguing it all to prove how important this country’s ecosystems are to the rest of the world.

“Guyana, the size of Great Britian with the population of Liverpool…..The largest unspoiled rainforest in the world…. lock away 40,000 million tonnes of carbon…..Guyana’s President has approached UK for carbon  credits to keep the forest intact….”

The documentary, The Land of the Jaguar, was one of the reasons we decided to brave the contrary winds and currents to make the 275 mile passage from Trinidad and motor a further 20 miles up the Essequibo River to the town of Bartica and the anchorage next to the Baganara Resort. We highly recommend it. :)

This was a new destination and continent that neither of us had been too and we expected an easy if slow trip to get there.  It is only 270 miles to the mouth of the mouth of the Essequibo River, but we would be 3 nights at sea.  Those who had gone before provided us with a huge amount of information including the BBC documentary, the hazards to watch for en route and waypoints all the way up the Essequibo River to Bartica and the anchorage off the Baganara Resort.


Tim made good use of the waypoints provided and this was our planned route from Trinidad to the mouth of the Essequibo River. 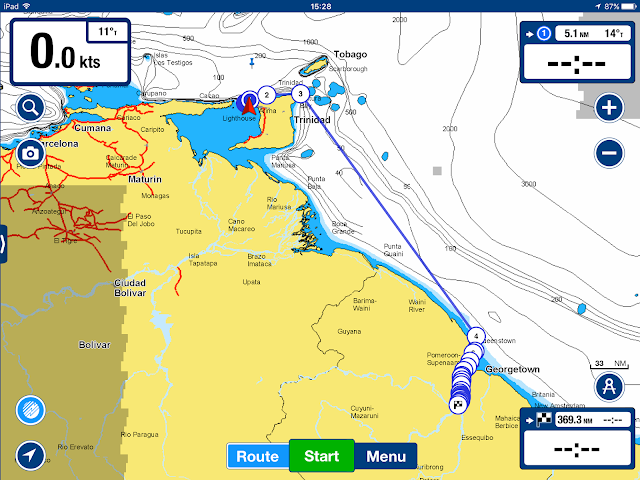 The Essebuibo River is the third widest river in the world and full of rocks, shallows and sandbanks.  It is tidal for over 20 miles inland which means many of the river hazards are submerged at high water.  There is a 2 knot current which needs to be taken into account as well.  Each dot you see on the river is a waypoint recorded by sailors who have been there. 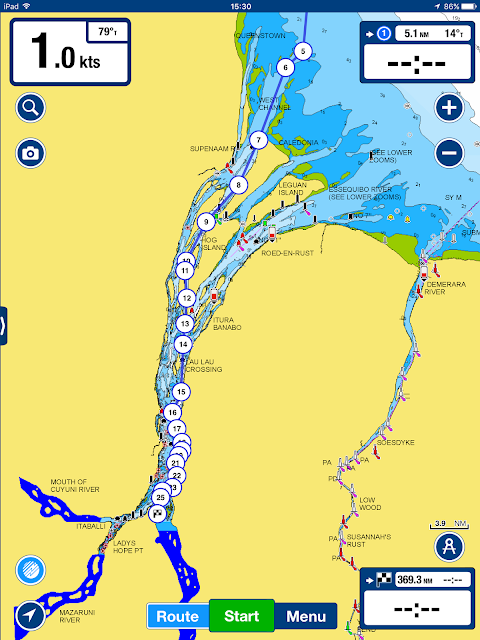 Navigating from one to the next gives you a tried and tested route up to Bartica, where the chart stops and then 4 miles beyond to the anchorage off the Baganara Resort, which is the second island in the river after the mapped chart ends.

We expected it to be something of an adventure and on the 10th of October we left Trinidad and headed south east to Guyana.

Initially, we had fairly good winds, a little north of East.  We expected light winds as we were passing through an area known for little or no wind called the Doldrums. We were warned by Bruce on Wild Matilda, who left Trinidad a few days after us to expect the odd, and potentially 35 knot, squall.

Day one went by without incident.  By nightfall we hadn't even cleared the southern tip of Trinidad.  Day two was a mix of fishing boats, oil rigs, too little wind and occasionally too much. 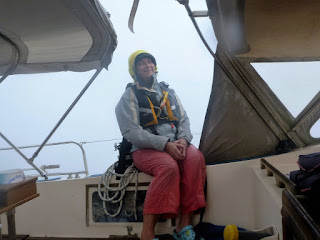 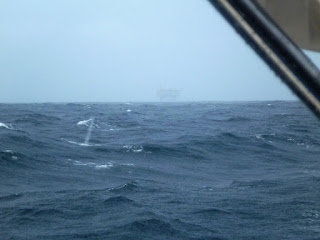 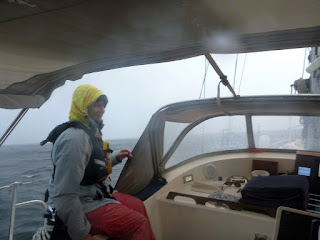 This was our 35 knot squall.  I like to watch where we're going even if it means getting wet and when we're heeled over, sitting on the edge of the cockpit is one of the easiest places to sit.  The middle photo is of an oil rig in the distance and a lot of wind and rain. I'm spluttering a bit in the last one, but it really is raining hard!

Happily they don't last long and it was the fastest we'd gone in a long while. 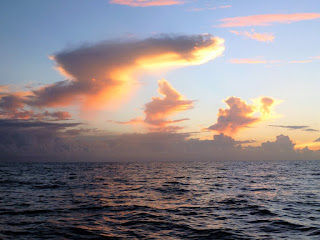 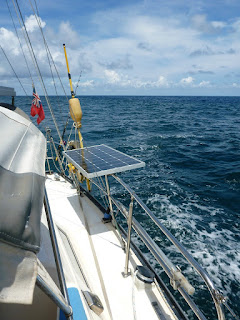 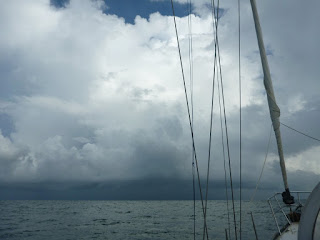 The next morning dawned with some spectacular cloud formations, which turned into quite a pleasant day, until the next squall hove into view. 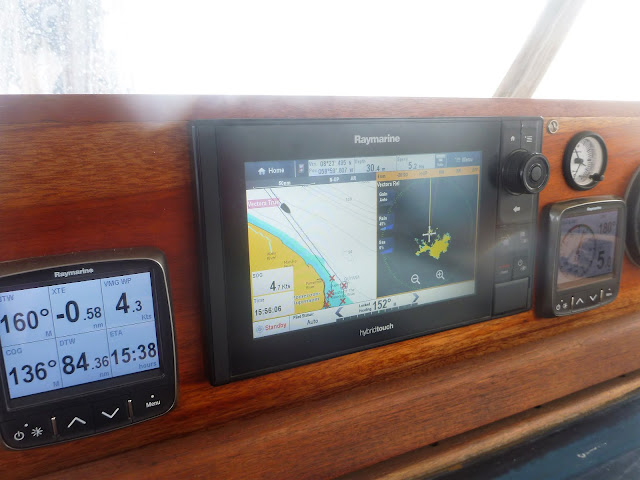 This photo shows how we can use the instruments in the new console.  The Multi-Functional Display, or Chart Plotter as it's more commonly known takes pride of place in the middle of the console and feeds information to the instruments on either side.  Tim decides what information is displayed and there are pages and pages, which you can mix and match to suit your needs.  The same goes for the Chart Plotter.  We normally just show the chart with the icon of the little boat, displaying our waypoint, boat speed, speed over the ground which takes into account currents and the like, depth, position in latitude and longitude and the time.  You can also control the autopilot from this screen which is touch or knob (?) controlled.

Because of the squally weather we were experiencing, Tim chose to also display the radar and that big yellow blog is a squall heading our way. The radar is orientated to the direction the yacht is moving.  The bottom of the screen is ahead and the top is astern.  The radar lets us see what's around us at night or in poor visibility and gives us information like the size, speed and direction of things around us. It can also be setup to warn if a vessel you've picked up on radar is on a collision course.

The instrument on the left is showing BTW - Bearing to Waypoint, COG - Course over the Ground, XTE - Cross Track Error which shows how far off course you are and there are many reasons why you might not be heading directly to your waypoint, DTW - Distance to Waypoint in Nautical Miles, VMG WP - Velocity Made Good to Waypoint shows how quickly (or slowly) you are approaching, the waypoint, and finally ETA - Estimated Time of Arrival, which is calculated from your Velocity Made Good.

This squall wasn't a patch on the previous day's for wind and rain.  We were expecting this as we had had a weather report from the boats already in Guyana via SSB (Single Side Band) Radio which has greater range than the regular marine radio.  With SSB Radio you broadcast on a agreed radio frequency at an agreed time so it is essentially a private conversation.  Anyone who knows the frequency and time can participate and we kept in touch with the boats in Guyana, those en route to Guyana and those soon to be en route to Guyana. 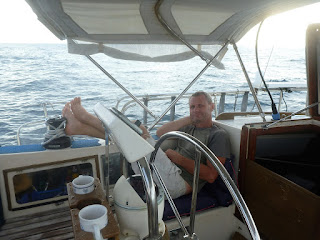 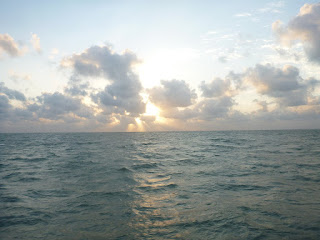 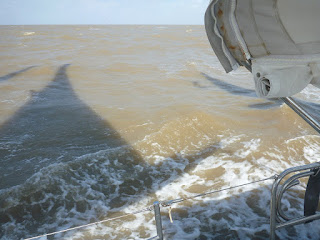 Tim post squall, followed by sunrise the morning of day four at sea and finally, as we approached the Essequibo River entrance the water colour changed from blue to 'chocolate milk' and I could not get over how sharp our shadow on the water was.  This was our first experience with water this dense. 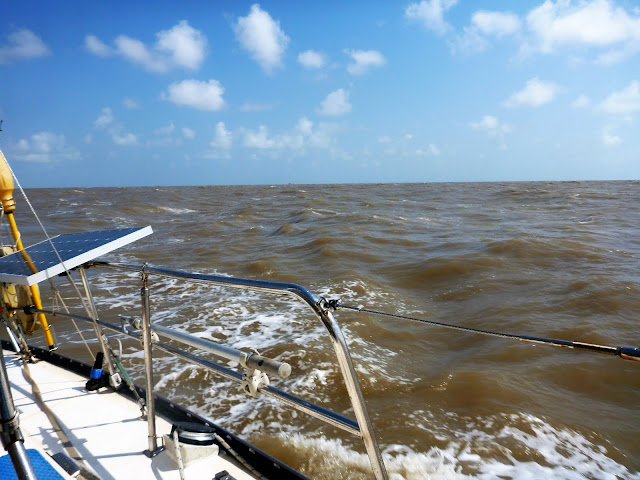 Its hard to pick out in this photo despite enhancing the colours and contrast, but there in the distance on the horizon line is a fishing boat.  Thanks to those who have gone before, we knew to watch for a fishing buoy which marked the one end of a huge fishing net strung between the buoy and the fishing boat.  The buoy and net would be carried down stream from the boat by the current, which gave you an idea (once you'd spotted a boat) where the net was so you could avoid it.

This, however, is not the only way they fish. 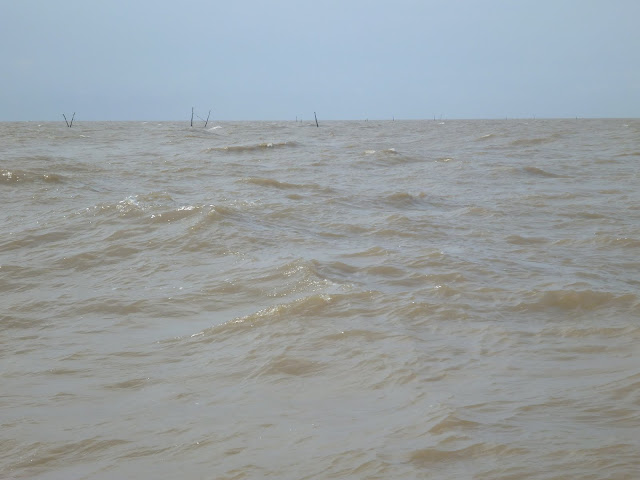 It is normal to be able to tell the depth of water by the colour, but not here.  Here at the mouth the Essequibo River you tell the depth by watching your chart like a hawk and following the waypoints we'd been provided with as well as keeping an eye out for fishing nets strung between two poles on invisible sandbanks.

There is another way they fish here but we'll save that until we're leaving Guyana and heading back down the river.

The Essequibo River is tidal and the tide alternates flowing up and down the river at approximately six hour intervals, so you plan to go up river when the tide is going that direction as well to arrive more quickly and at high water. We arrived at the river just as the tide had turned and would have 6 hours of tide helping us along.

Shortly after the last photo was taken our chart plotter leapt into action with another chore that Tim set it up for.  Tim monitors the engine usage, fuel consumption and alarms on the charter potter via sensors attached to the engine.  So when the engine overheated, just as we were entering an area of sandbanks and shallows, not only did we get the basic alarm on the engine panel in the cockpit, we also had the chart plotter telling us most insistently via alarms and screen messages that the engine really was most definitely too hot.

We throttled back to just tick-over and Tim went below to investigate.  He quickly established that, yes, the engine was hot as well as being completely dry of coolant, which explained the 'hot'. Why it was dry of coolant, he didn't know but as it wasn't going to be an immediate fix, we rolled out the jib and turned off the engine.  We had the perfect wind of 20 to 25 knots on the beam to continue sailing up the river.

At this point we had no idea what was wrong or if Tim could fix it and we didn't know if we'd be able to get parts or mechanics down here and we still had 20 miles to travel up river to get to the anchorage and we'd need the engine for that.  If this problem had happened while we were still out to sea, we might well have considered turning around and heading straight back to Tobago, where we could sail into Store Bay and drop anchor without using the engine at all.  As we were already scooting up river with the wind and tide on the fastest sail of the entire journey, Guyana it was.

Our plan had always been to anchor just inside the mouth of the river so we chose a spot well off the coast of Georgetown, the Capital of Guyana.  The information we had been given about anchoring was to anchor about 300 metres off the river bank.  The Essequibo River is kilometres wide particularly at the mouth and riddled with islands and shallows.  The local traffic, 25 knot water taxis, barges transporting logs or stone,  ferries and the like,  all travel close in to the river bank.  Yachts are not expected in the river so anchoring 300 metres off will keep you out of their path.

Days later in our stay, and having heard a fisherman complain that, 'the reason he didn't see the yacht' was because they had thought the mast head anchor light was a star, we were very glad that we hang our anchor light low and near the bow as a matter of course.  That night we also put an additional light in the cockpit so that it would be apparent from a long way off that we were indeed a yacht. 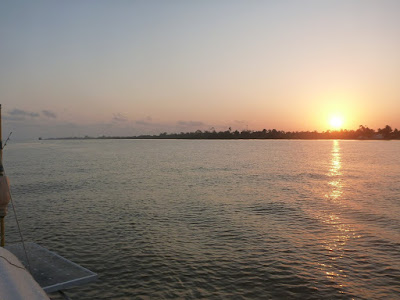 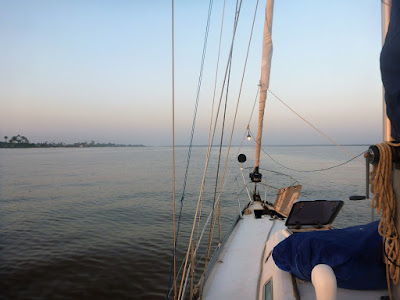 Sunrise off Georgetown, and a view of our anchor light as well as up river where we'd shortly be heading as Tim had discovered the problem and managed a fix.  It seems that one of the fittings that the water hose is clipped over had rusted enough so that the hose came off draining all the coolant into the bilge.  Happily, it hadn't rusted away completely so Tim eased the hose back over the stub and clamped it in place.  This incident didn't turn into a drama at all and, I agreed when Tim commented philosophically that the whole experience really was very good practice.