Guyana and the Essequibo River, Bartica and the Baganara Resort Anchorage

We started out 20 mile journey up river on the 14 of October.  Although Tim had fixed our engine over heating problem, we'd never feel it was truly fixed until we replaced the damaged oil cooler, so we started out under sail. 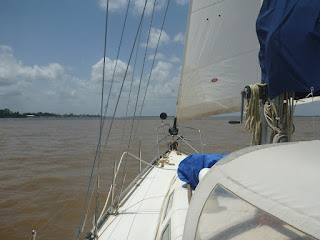 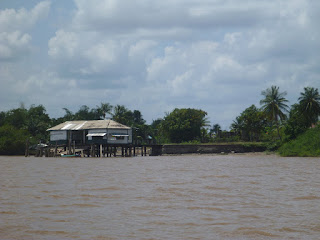 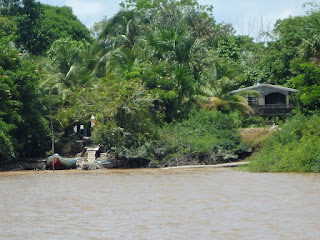 There are no bridges across the Essequibo River and it is the main thoroughfare from the coast to the interior.  The roads on either side use ferries to transport people, vehicles and goods from one side to the other, and ferries, taxi's, goods and supplies.  Homes along the river have boats and docks rather than cars and garages.

Although much of Guyana's rainforests are still untouched, logging does go on as we saw by the numerous saw mills and barges transporting logs down the river.

Fast water taxis travel up and down the length of the river.  Water taxi, drivers spend years apprenticing with experienced drivers learning the river.  With no visibility and a 2 metre rise and fall of tide you need to know where all the hazards, including rapids, and safe channels are. 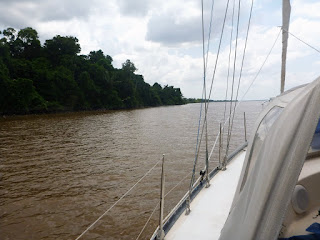 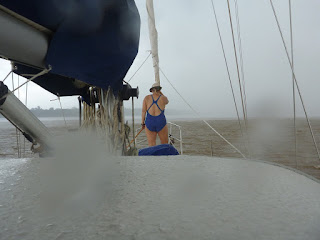 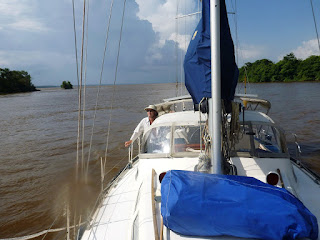 So up the river we went, taking the opportunity to fresh wash the deck in the first of many squalls and following the waypoints between islands where you became much more aware of the strength of the  2 knots plus current. 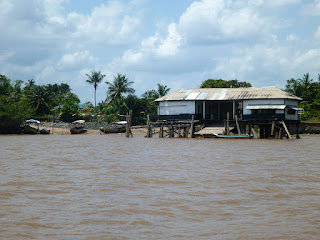 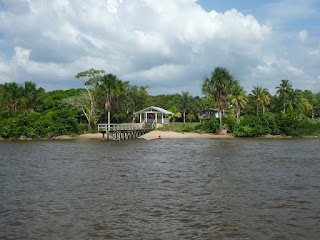 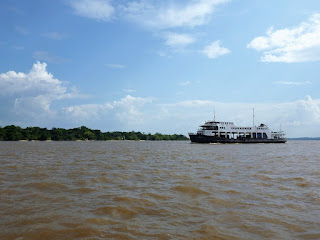 It really looks like an interesting place to live.  Although there were lots of homes scattered along the river bank and the one ferry we passed, it will seemed very isolated. 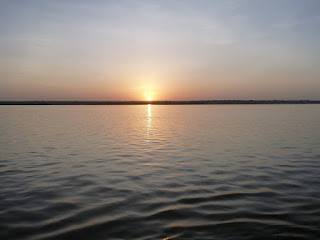 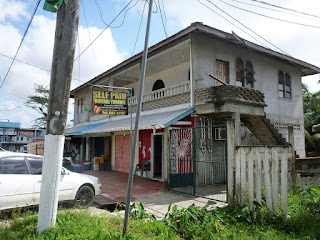 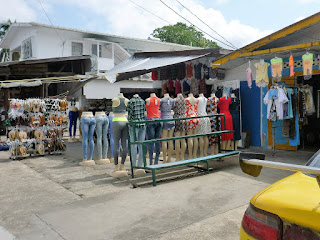 Sunrise across the Essequibo River while anchored off the town of Bartica, which Tim described as something out of the Wild West.  As well as logging, gold mining is one of the main industries and there were many places to sell gold.  Some establishments even had an armed security guard at the door.  And some things never change, you can always shop no matter how far out of the mainstream you get. 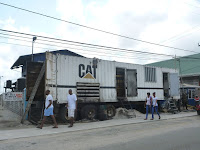 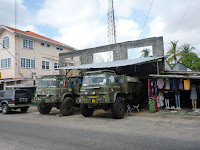 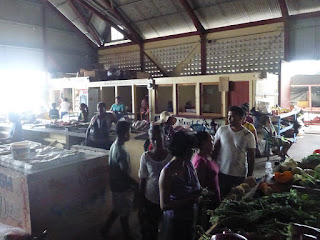 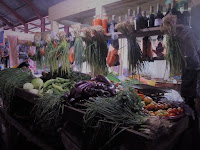 This ship container contains one of the generators that provide the power for Bartica.  It rumbles away 24/7 and once we saw a huge plume of black smoke that enveloped the market, which is under the green roof to the right. 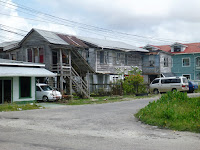 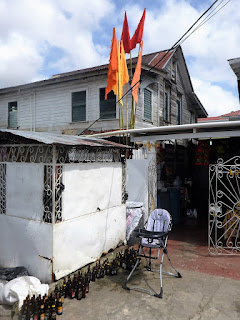 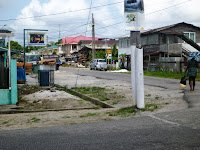 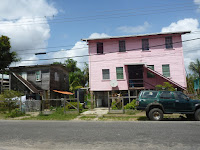 This is what we saw on our first wander around the town.  There are two main streets that run parallel to the river and the buildings are a mix of well maintained and derelict.  I'm fascinated by the juxtaposition of the Hindu prayer flags outside the bar?cafe?shop, the gathering of beer bottles and the highchair.  It is such a mixed story.

A river view of Bartica.  The long green roof is that of the Market.

The next photo is of Tim getting us back to Larus after unsuccessfully checking in in Bartica.  We arrived at about 1530 on Friday afternoon.  It was a little close to the 1600 closing time and there was a Cricket Match going one behind the walked playing field, and the Immigration Official was nowhere to be found.  Saturday morning we checked a couple of times and were resigning ourselves to listening to the Bartica generator until Monday, when a water taxi approached with the Immigration Official on board.  He was most helpful and said that we could go in on Sunday, as he'd be in the office or go to the anchorage and come back on Monday.  He was very accommodating and the only person on the Essequibo river whom we saw wearing a lifejacket.  What a job and what a country to live where the primary means of transportation is water taxi and to be afraid of water!  We decided to wait till Monday as another boat soon to arrive, Honey Ryder, would be checking in then as well. 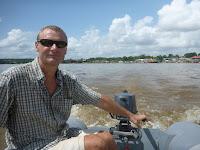 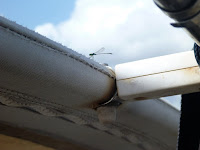 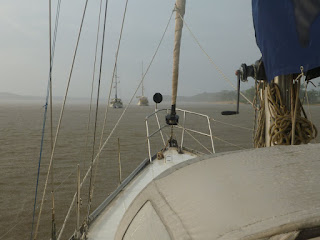 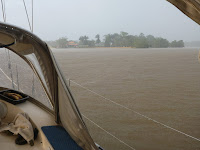 The last leg of the journey from Bartica to the anchorage is literally off the chart.  The river hasn't been surveyed past Bartica, but thanks to the waypoints we'd been provided with, it was very straight forward.  I must say that the we were not 100% sure that it was necessary to take us so close to a very large rock before making quite a sharp turn and we had the feeling that might have been a tease from the first explorers.

At the anchorage our first visitor was a dragon fly.  We'd been visited by one before at anchor off Georgetown.  It was an early morning visit where I was making coffee and Tim was still in bed.  The main hatch screens hadn't been out long when this huge black and red dragonfly shot into the boat and carried on at speed into the forepeak where Tim was sleeping.  I heard the rattling of wings against the wood panelling (or the blades of the fan!) and rushed forward to remove the hatch net to give it a clear path out, but it went quiet and I have no idea what happened to it, and Tim missed it completely.

We were also greeted by a good strong burst of rain, (we had just anchored in time),  which was most welcome as were looking forward to catching our  water rather than making it. Irritatingly, we ended up making water anyway because though squalls would roll through, they would nearly always miss us or only catch us a glancing blow. 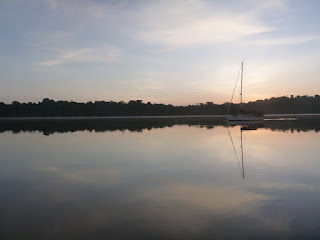 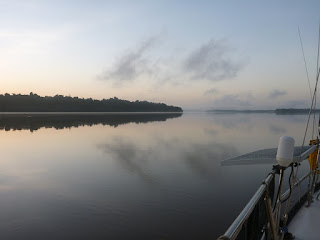 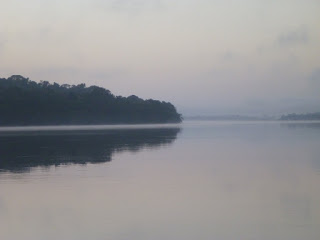 Our first sunrise at the anchorage.  It gets quite cool at night (which is marvellous and I am in no way complaining) but it is often very hot in the day .  The combination of cool air on a hot deck makes a some condensation inside the boat and lots on the deck come morning.  We also had an early morning mist, which made a very nice setting for SV Persephone. 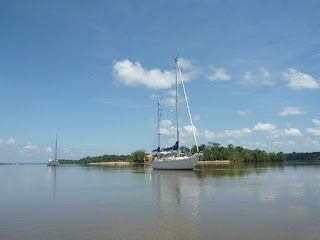 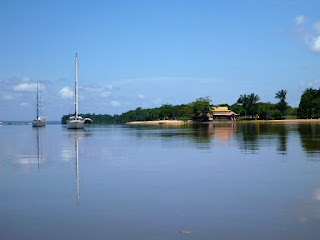 This was our backyard for the next few weeks with four to five neighbours and the Baganara Resort as our local watering hole.  In the far distance you can just make out Bartica behind SV Sinbad and SV LiaHona.