Arthur’s Cove, Rabi Island, Paradise Resort and what we’re up too now.

Arthur’s Cove was a destination we’d heard very good reports about, so when a southerly wind arrived we took the opportunity to make the short sail north to Rabi Island.
This extract concerning Rabi Island is from the ‘ Fiji Compendium’, a cruising guide created and updated by various cruisers over the years.

‘Rabi Island (pronounced Rambi) has four villages populated by Micronesians originally from Banaba, in Kiribati. Their homeland was ruined by phosphate mining and influx of settlers and more so during WWII when the Japanese invaded Banaba and massacred many villagers. Rabi was purchased for the Banabans by the British Government with Banabas own phosphate mining royalties. In 2000 the survivors were resettled here.’

You can find out much more about the Banabans at their website - Come Meet The Banabans.

‘The forgotten story of the Banabans is a very special tale. One which in today's society would cause a world outcry and would never have been allowed to happen. It's a lesson we should tell our future generations to ensure that these tragic events in history are never repeated. It's also a wonderful story of courage, determination and hope as the Banabans come back from the very brink of extinction.’

It is a shocking history that affects the Banabans to this day.

We were able to use wifi for the whole of our passage up to Arthur’s Cove. Once we passed between the outer then inner reefs into the anchorage, the wifi disappeared completely.

A lot of time was spent getting our little underwater camera found and charged as the snorkelling in the bay was very good, we hid from the heat of the day on Burmese Breeze playing Mexican Train Dominos and I did a lot of cooking.  We were planning to stay more than two days when the weather forecast took a turn for the worse and we had to up anchor and move to the south of Riba for a well protected anchorage with good holding. It was a nice change to be anchored in 10 metres of water in nice sticky mud.

Alistair, one of crew on Burmese Breeze provided some photos as I hadn’t taken any. Sometimes you’re just doing and it’s easy to forget about photos all together.  We plan to visit Riba again when we visit Fiji again in 2023 and I will do better then. :)

The cove is quite large with small beach areas. Thick foliage gives you only hints of the buildings behind. We saw boats full of people going out to fish on the reef to whom we waved. We took their waving back as a encouraging sign though that was all the communication we had. The anchorage is quite far from the beach as much closer is rife with coral heads/rocks. 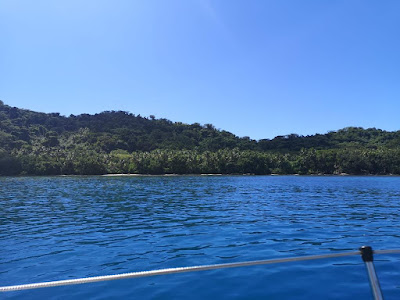 The beach where they go ashore.

Larus anchored in 30 metres.
We left Rabi Island to shop and the  stop at a halfway point on our way to Suva. 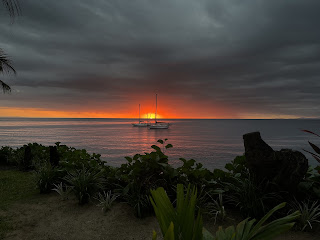 Larus and Burmese Breeze anchored off Paradise Resort, a very nice stop between Riba and Suva.
The resort provides moorings for visiting yachts in the hope that they would use the restaurant. Tim, Colin, Thant Zin and Alistair went ashore to the bar to ‘pay’ by buying beer for the use of the mooring.  Witney weren’t the only ones taking photos of our boats at anchor. Many of the clientele at the bar did as well and they will be appearing in quite a few holiday snaps. 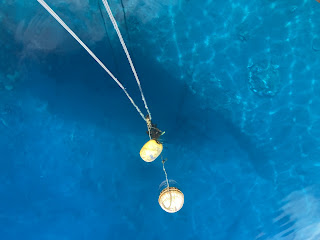 The water here was the most astonishing blue and very clear.
Tim and I snorkelled a sloping wall just to the west of the resort. It was quite deep and as the wall disappeared into the depths, the colour got darker but the blue was even more intense.
We also swam through thermoclines, where warm surface water and cold water from the depths meet. I’ve felt them before but had never actually seen them. The water actually became blurry.  You felt that blinking should clear your vision, but nothing changed until you moved out of the thermocline. It was quite disconcerting.
From a website called BoatSafe/thermocline -
So today, we are once again in Musket Cove and just beginning to look for weather windows for our passage to NZ.   On out way here, we stopped in at Vuda Marina to get the zipper replaced on the bimini.  It’s an important zip as it attaches the infill between the sprayhood to the bimini.  Without the infill there is the potential to get very wet from rain and rogue waves. The thought of sailing to NZ without out it was not very appealing.

It would have been nice if the sun damaged half of the zip had been on the infill, a single panel that unzips from both the sprayhood and the bimini, but it wasn’t.  It was the bimini side, which has the solar panels bolted on top of the bimini. 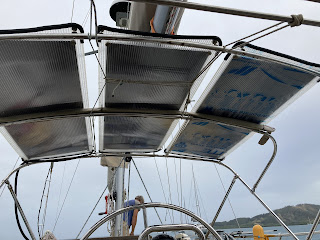 It looks very strange with the solar panels visible from below. It also doesn’t give much rain protection and anchored off Vuda Marina, on Diwali - the Celebration of Light - there was constant heavy rain all night. As a side note the plastic panels supporting the panels was Tim’s design.  The poles supporting the bimini are curved, which makes fitting flat, though slightly flexible, panels a challenge.  My contribution to providing support for the panels was to sew a long tube, into which we inserted swim noodles halves, cut length wise. The tube was was then attached to the middle support and secured with cable ties to the panels.
To removed the bimini canvas you have to undo the fittings at the front, slide the canvas toward the back of the bimini, refasten the forward fittings, undo the aft fittings, slide the canvas out and redo the fittings. Without being attached to either the canvas or the solar panels the frames just collapse.  It’s a long a fiddly process, which you have to repeat to get the canvas back on.
The was a very good sail loft near the marina that did the repair, for $100 Fiji  while we were shopping in Lautoka.
On the local flora…
Mangos and pineapples are at the height of their seasons. Mangos are now sold ripe and go off in an instant. I froze some for smoothies (Tim is VERY fond of smoothies, particularly the ones they make ashore with ice cream, which is a bit of a cheat.) and made another batch of chutney.  The pineapples are now 4 for $5 and I’m looking for new ways to use them. They last longer than mangos but that’s still a lot of pineapple and the freezer is only so big.
On the local fauna..
Eep! A small White Ribbon Eel of the conger eel family.
Burmese Breeze has a light on the aft deck, which attracts little fish, which attracts various predators. This type of eel is sold for tropical aquarium. It really was very pretty.
Double Eep!

Colin and Thant Zin have been doing a lot of work on BB’s outboard. It’s been very badly behaved and yesterday they stripped it down, changed the spark plugs, etc, etc,finally gave up and climbed out of the dinghy. As they gave the engine on last look of disgust, they saw this black and white Banded Sea Krait right where they’d been working for the last couple of hours.
The Sea Kraits preferred food is eels. I can’t help but wonder if it had slithered onto and into the dinghy to digest a small White Eel the previous night.
Even Thant Zin, who is far more used to things found in the sea than anyone I have met before, was rattled by the Krait, but was bold enough to scoop it out of the dinghy with a boat hook.
Thant Zin is an expert fisherman. Catching a fish has always been a piece of cake; getting it on board is a different thing all together. The trick, apparently, to landing a big Mahi Mahi like the one below is to grab the line and swing the fish up and onto the deck. This was caught and landed on the way to Paradise Bay. 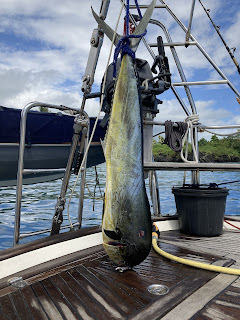 They gutted the fish en route but saved the filleting for my arrival.  I am very out of practice. Thant Zin was surgically precise and hardly a scrap of flesh was left. 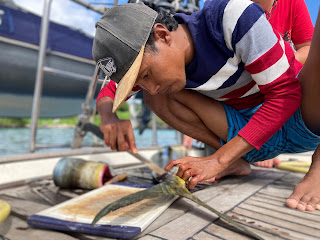 We had dinner with them that night. Sashimi to start, followed by very lightly pan-fried egg-battered Mahi with bok choy, blanched then sautéed with thirty cloves of garlic and oyster sauce. Yum.
After leaving Paradise Cove, we pushed on to Suva, making a 14 hour over night passage to arrive in daylight. Suva was not quite as expected and I’ll more about that in the next blog.