Not yet NZ bound and a look around Suva

We’re still waiting for a weather window and it might yet be another week or two.

You’d be forgiven for thinking, ‘Oh for  heaven’s sake, get on with it!’ but we aren’t in any rush and plan, as always, to sailing conservatively.  We got it just right coming to Fiji in May. It took us a day or two longer than some boats but we had a uniformly pleasant passage. We also arrived early on Monday morning to avoid overtime fees for clearing in on a weekend.

We are looking to depart on a wind direction from Fiji that will carry us down to a great big slow moving High Pressure to the north of NZ, which we will ride to our destination, with a minimum of motoring calms. You could say, ‘We have High hopes.’

Just to give you an idea of what we look for in a forecast when passage planning I made a little video.

I apologise for all the ‘Ums ’ but I was holding my phone with one hand, using my pointer, talking at the same time and it was all a bit much.

We’re currently biding our time in Musket Cove, which is full of other boats waiting as we are.

We’ve had a mix of weather.  Today it is pouring with rain and we’ve had the excitement air horns blasting trying to get the attention of yacht dragging it’s anchor through the anchorage. FYI we have a very effect anchor alarm, which would let us know before anyone did that we were dragging. 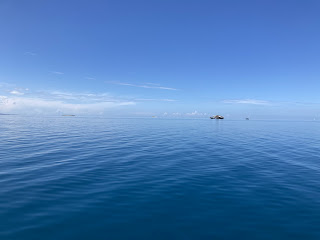 Reefs in the distance. Some with islands and some you can only see the waves breaking. Fiji is is very popular surfing destination. 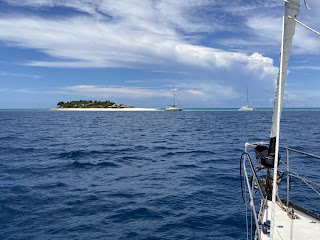 We had a morning snorkelling at a small resort. They can’t stop you from anchoring and swimming but they can kick you off their island. And they aren’t shy about it. We left when the wind started to pick up and the clouds began to move in. 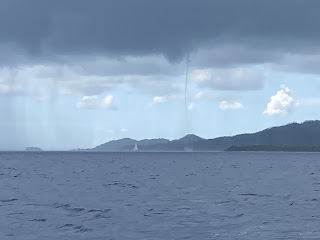 As we approached Musket Cove, Tim spotted a water spout that appeared to be heading into the anchorage.  It soon fizzled out. This is the first we had ever seen. 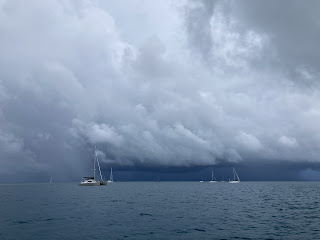 The last couple of days have been wet and windy, with great rain clouds slowly passing by.  We made the most of the rain we got by collecting water. 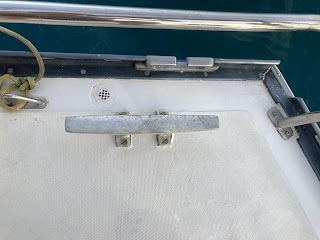 We collected the water through our deck drains. We have a series of two way valve in the aft head (bathroom) which allows any water collected to run over the side, into our shower tray or into our water tanks. 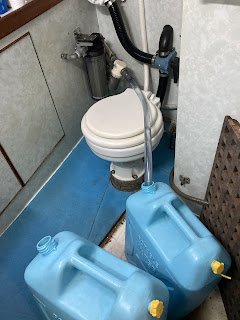 The water runs through a mesh filtered for large particles and we test the water before it goes into the tanks. The rain washes salt, dust and debris off the sails and deck. We test for Total Desolved Solids before diverting the water into our tanks.  The reading needs to be under 500 ppm. Today it was 31.
The jerry cans are used for laundry or emergency drinking water when on passage. 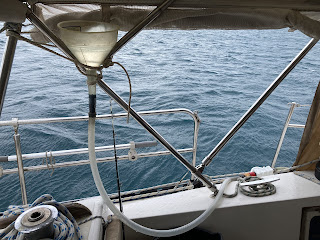 We’d like to use an finer filter for water going straight into our tanks.  The water is gravity fed and flow isn’t strong enough for it to pass through a carbon filter fast enough to make it worthwhile, so we started experimenting.
It isn’t very elegant and the water needs to be poured into the funnel, and it’s a little slow, but it worked. We really had a lot of fun doing it. It was right up there with diverting streams and building dams at the beach. 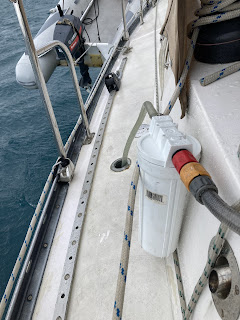 This is the carbon filter system we use for filtering water whenever we fill up from a hose pipe on a marina or dock.

There were beautiful days as well and we were treated to watching kite surfers in the distance and  wing foils zooming past us.  Tim was much taken with the latter.
Wind Foiling? Not completely sure that they use that term but I can’t think of a better one.
Lastly, Suva the Capital of Fiji.

We were expecting something very grand. From the sea we could see reefs, mountains and the odd skyscraper. 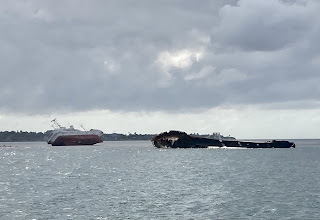 Up close you could see the effects of being in a cyclone area. 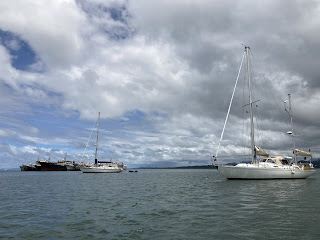 The anchorage off the Suva Yacht Club. From right to left- Larus, Burmese Breeze, and a raft of scrap boats permanently anchored in the bay. 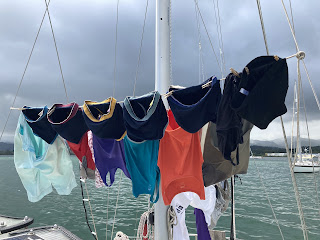 I thought this was a very jolly laundry photo despite the ominous clouds.  We always start laundry at the break of day so we’re in with a chance of getting it dry.

Suva has a very crowded water front. At the far right there is a cruise ship in port for the day. 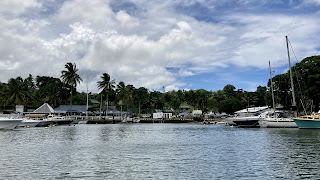 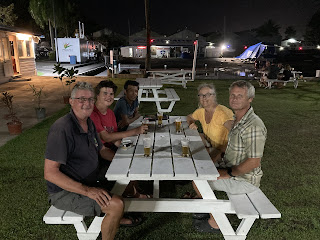 Colin, Alistair, Thant Zin and Tim and I supporting the Yacht Club bar. 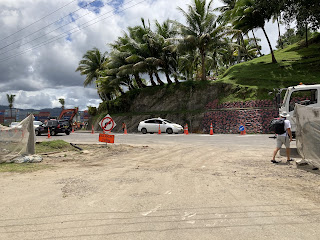 We needed to pick up provisions so Tim and I decided to walk into to town so as best to see the sights. 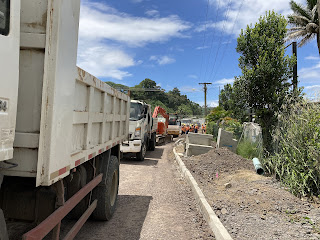 What we saw most of were road works. 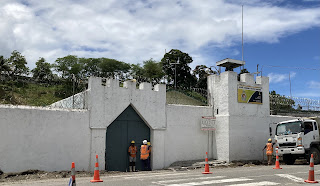 Across the marina is the Suva Correctional Facility. The place looks pretty dire, but there were small houses, a medical centre and a support centre on the grounds around the high security core of the prison. 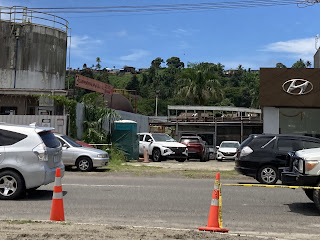 The high ground in the distance looks like the more affluent part of Suva. 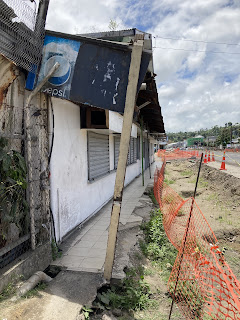 The construction work went on and on. They seemed to be replacing the drains. I’m not sure what the state of this building was before the work started, but the makeshift roof supports weren’t particularly reassuring. A food stall at the bus station. 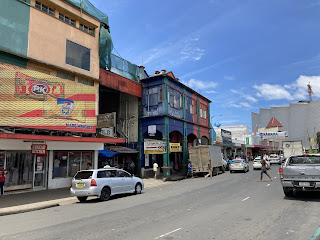 Some of the buildings had a colonial feel to them. 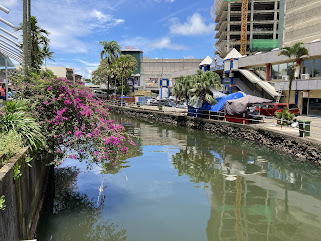 The canal through the city centre had restaurants lining both sides. 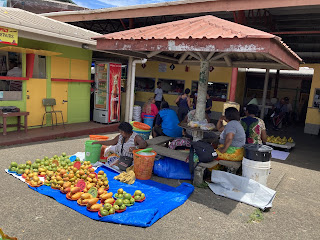 A wonderful variety of mangos glowing in the sun. 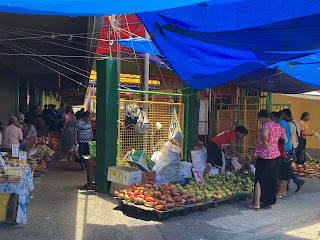 An entrance to the Suva market. 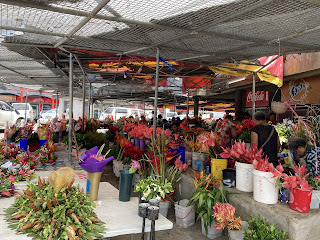 A flower stall. Diwali was imminent and I’m sure floral displays play a big part the celebrations. 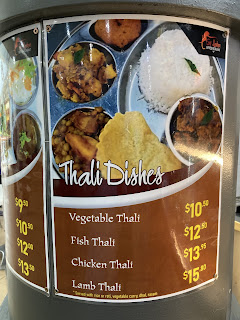 Lunch in one of the many food courts. 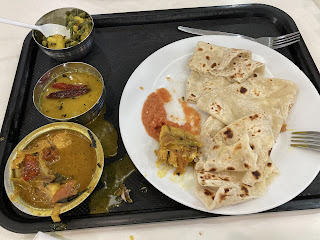 I had the Fish Thali, which is meal made up of rice or roti bread, a really lovely dhal, a potato and spinach curry and a fried vegetable pakora sort of thing.  It was SPICY but absolutely delicious. 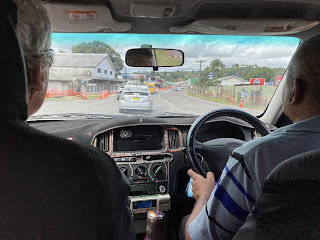 Our ‘pimped’ taxi back to the marina. The little dots do look nice.
All stocked up, we left Suva for Denarau and then Musket Cove to begin our wait for a weather window for New Zealand.
***News Flash*** Just this morning, it looks like we might well be able to leave in a weeks time. We will keep you posted.