Viani Bay was  nice change from the hustle and bustle of Suvasuva. We arrived during a period of holiday to celebrate Fiji Day.  The local school is by the water front, which we could pick out because that was where the singing was coming from. 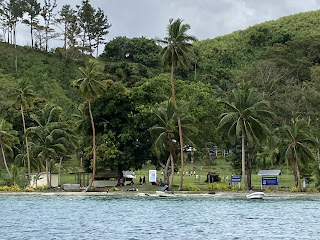 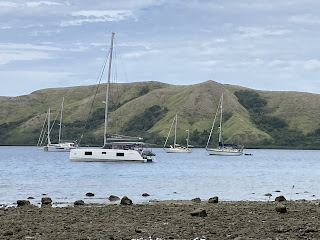 The anchorage here seemed to be either 15ish metres deep with lots of rocks that catch your chain as the boat swings making quite horrible scraping noises, or 25 to 30 metres, which leaves you with less scope than we are used to.  After one horrible night listening to chain on rock, we opted to anchor in 30ish metres.  This meant less scope than we are used to but in settled conditions, with good holding and the knowledge that if we did drag it would only be until we snagged on a rock, we chanced it. 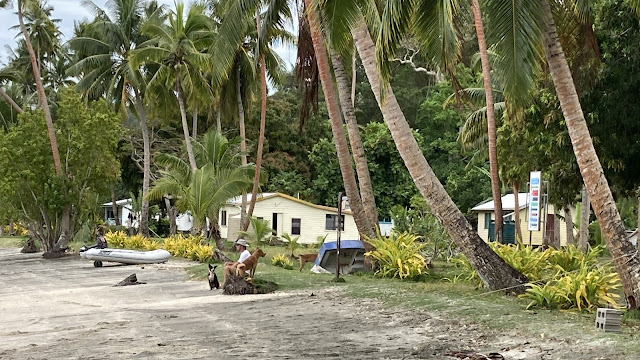 Once ashore, the local canines try their luck. Even the adult dogs have adopted a puppy type of submissive begging when first you meet. They must have noticed how well it worked for actual puppy.  Once they realise no food was forthcoming they contented themselves with charging up and down the beach as we walked. 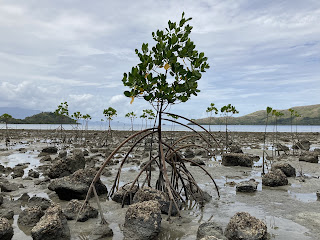 There is something both elegant and surreal about mangroves.
We signed up for a dinner at the German run restaurant/bar and Dive Centre along with all the other yacht crews in the Bay. The food is baked in a pit and are very much local fare. 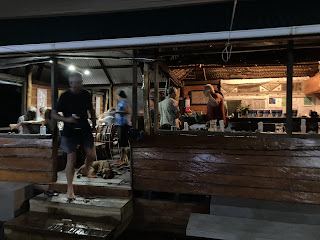 Though I did get a look at the cooking pit, there really want anything to see. I had planned to watch the food being uncovered but a squall with torrential rain and wind swept in and settled for staying dry instead. 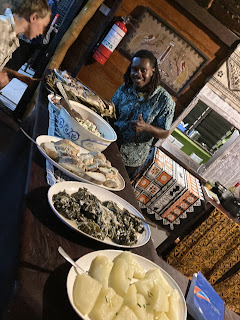 From top to bottom - There was a huge Grouper, that was the centrepiece of the meal; roast chicken which is hidden by the mixed salad; the things that look like bread is actually baked taro root;  next is taro leaves cooked in coconut cream; and finally cooked papaya or pawpaw.
The Grouper and taro in coconut cream were my favourites. 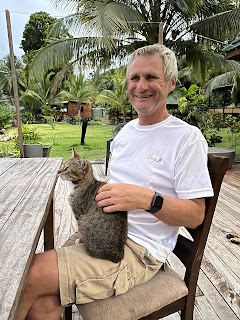 The village not only has dogs, it has it’s fair share of cats as well. This one jumped onto Tim’s lap of its own accord.  Tim was more than okay with this.
With favourable winds from the south east forecast the next day, we decided to up anchor for Arthur’s Bay on Rabi Island. 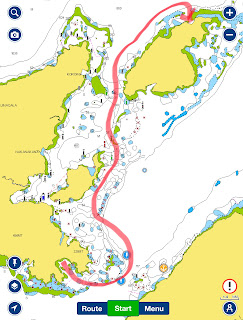