Once the fresh paint in the cockpit had cured sufficiently to put the cleats, winches, winch handle holder we left Culebra for Fajardo on the East Coast of Puerto Rico.

We stayed in Sunbay Marina for three nights to have plenty of fresh water to do a lot of cleaning jobs. 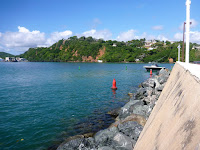 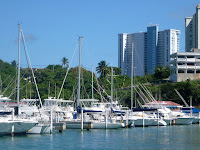 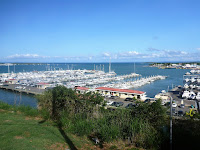 The islands just of the east coast of Puerto Rico; the very narrow buoyed channel into Sunbay Marina - we were warned NOT to go outside it; Larus in her berth; Sunbay Marina. 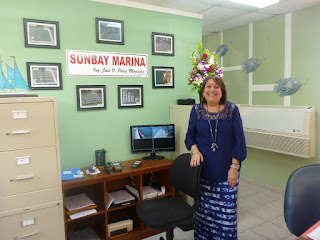 We were much taken with Sunbay Marina and its very hands on owner Olga.

Olga is one of the two Ocean Cruising Club Port Officers in Puerto Rico.  To date she has only met two other OOC boats and she was very excited to meet us as the third.

She had just received the 2017 OCC Members hand book and we were all pleased to look up Larus in the list.  We signed and dated our entry and admired her brand new OOC burgee, which is no longer the long pennant shape which needs its point repaired and then clipped when there isn't enough fabric left to repair.  I would have got a picture of it, we have but she'd sent it off to have Sunbay Marina appliqued on under the flying fish logo.

We washed the dinghy - salt, oil and dirt build up and only a good soapy freshwater wash will touch it. We also washed and re-waterproofed the spray hood. During the last torrential rain shower in Culebra, we were dismayed to find water coming straight through the canvas, dripping onto our heads and down the companion way, so we took it off and spread it out on deck and scrubbed it all over, but particularly the dark greasy area above the hatch which was probably cause by cooking vapours from the galley.  Waterproof canvas is tricky. If you scrub it, you take the waterproofing off, so we waited until it needed to be reapplied before washing it - WHAT A DIFFERENCE!  It is almost like new, light and bright.  Our friend Skipper Tim would be proud, and even prouder yet to know that we are looking for a replacement for the nasty plastic winch holder in the cockpit with something less likely to let our paint job down.  We rinsed the furling drum of the roller reefing for the jib and washed down the decks.

We did a little provisioning in between these jobs so that I could start adding to the meals I'd begun preparing and freezing for our next long sail to Charleston, South Carolina. We now have most dinners covered with lasagne, cottage pie, Trinidad Macaroni Pie and chicken curry in the freezer.  That way if I don't feel like cooking, I don't have too.

On Mother's Day in North America, Sunday the 14th of May, we sailed from Fajardo to San Juan.

The sail was a taster of our imminent journey to Charleston, South Carolina on the 17th - tomorrow even! Sailing along on the north coast of Puerto Rico our course was heading pretty much straight to Charleston.

We started in quite light winds, which built to just over twenty knots as the day progressed.  Puerto Rico is 4 to 5 degrees hotter than the islands we've been visiting over the last three years.  As the island heats up stronger winds are generated, peaking in the later afternoon and then dying off over night.  They should be more consistent once we are way from the island affect.

There was lots to see as we barrelled along the north shore. 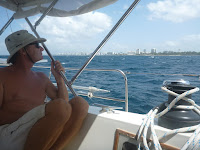 Tim looking and the north shore of the Old City.  We later learned that the colourful area between the buildings on top and the shore is a 'No Go' area for most people as those living there manage and police themselves.  They pretty much live outside the law and the law allows it said our Uber taxi driver. 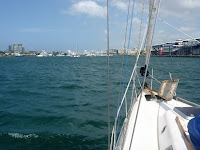 Fort Morro, and the anchorage which is bordered by the  Old Town to the north, ferry docks and a small airport to the south and the marina to the east  on/or next to a bridge which allows water to flow back and forth with the tide. 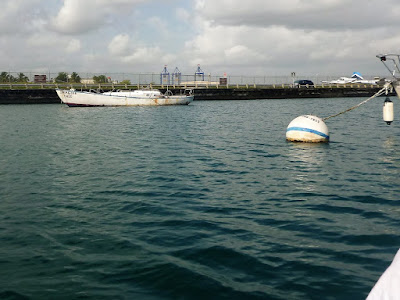 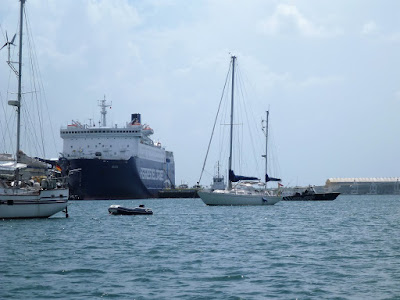 The nearby runway and Larus at anchor.  Not the prettiest anchorage we've stayed at but something is always going on.

Yesterday we visited the Old Town, which we'd seen from the other side as we sailed down the coast. 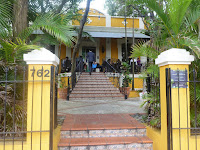 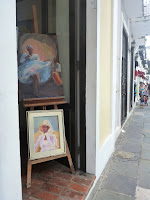 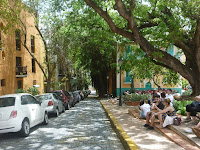 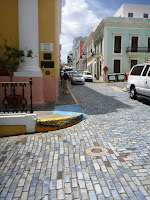 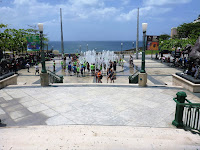 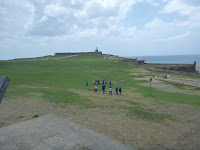 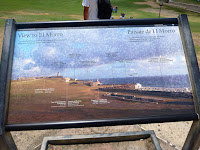 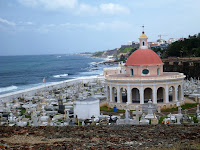 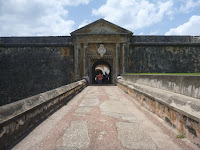 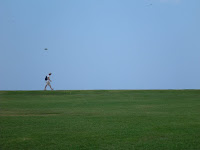 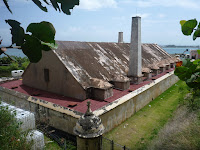 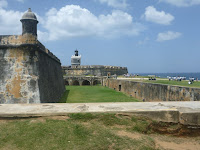 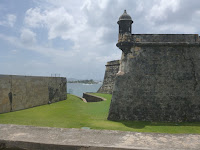 Views of El Morro.  It was very impressive. 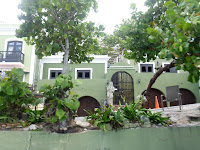 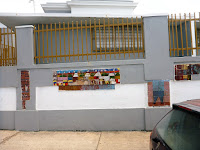 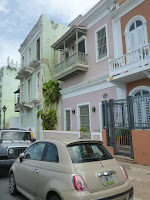 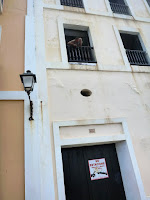 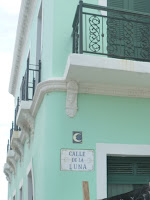 And finally, photos taken from the bus.  It is a beautiful city and I do wish we'd had more time to discover it, but tomorrow morning we will start our journey up the East coast of the US. 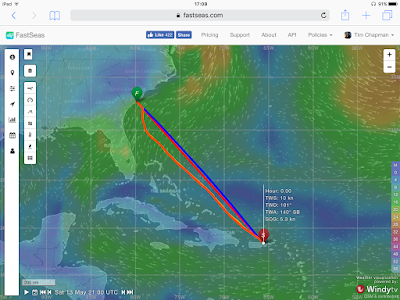 And this is will probably be very like the route we will take.  This is an online program that figures out the best route based on limits you set (like max and min wind strengths).  this was done a couple of days ago and the three choices are now very similar.

We won't be stopping anywhere before South Carolina, although we do pass very close to the Bahamas and the journey should take seven or eight days.  Its a distance of about 1200 miles. You can follow our progress on the map at the top of our blog as Tim will be updating our location daily and we should be able to post small entries as we go along.

So there you go!  We're really looking forward to having a very pleasant sail north.
Posted by Yachtlarus at 22:44