April/May 2017 and the final Guyana instalment


Our charters were finished by the end of March, although we were asked to do a couple more and if it hadn’t been time to be moving on we would have. We’ve been cruising and working over three years in the Eastern Caribbean and if feels like time for a change of location.

We came here to give Larus some much TLC.  We just finished up painting the cockpit with a two-pack polyurethane primer and then top coat. It has not been easy and although the results are far from professional, the cockpit looks so much better than she did before we are very pleased.

We are now getting Larus back together - the whole cockpit had to be cleared of cleats, winches, instrument console, fitted speaker, any removable teak trim.  We then sanded and filled and sanded, before washing, masked around all the things we couldn't remove and applied the undercoat. 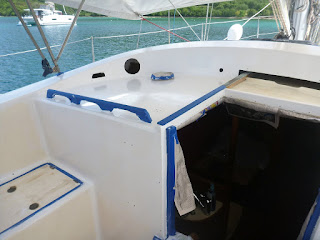 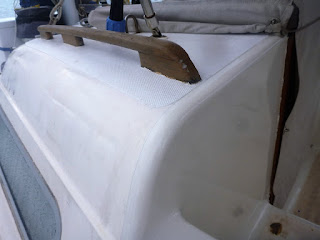 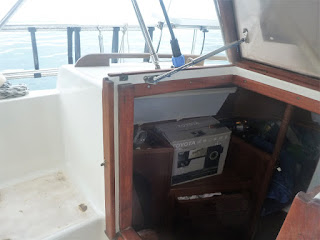 All taped up, the old gelcoat outside the cockpit compared to the new inside, the sharp white (light oyster, actually) glossy surface looks amazing next to the oiled teak.

We watched numerous Youtube videos on now to get the best results. Rolling  and 'tipping' with a brush is the recommended technique and I'm sure it works very well when painting the hull which were the only videos we could find.  Tipping is lightly pulling the brush across the freshly rolled surface to smooth out dimples left by the roller. Painting an area with all sorts of corners and edges was a completely different and not particularly pleasant experience.  We were up before dawn so we would be ready to paint before the wind and sun came up.  Each coat of paint took less than an hour but it felt like much long.  Happily as the paint cures it shrinks so that brushstrokes and dimples smoothed out a little.

To get a perfect finish we would have needed to have the cockpit sprayed professionally, which would have been ten times the cost. Having said that, she looks pretty darn good right now.

It is now the eleventh of May and we are waiting for good weather to start our trip up the East Coast of the US.  We plan to depart from the Puerto Rico and head straight up to Charleston, North Carolina, but this is subject to change depending on the weather.  We're entering a period of lighter winds and if its too light we might break up the journey and stop in Florida, hoping for better.  We will keep you  posted!  It is exciting to be on the move again.

And last but not least the final Guyana instalment.

We finally left Guyana at the end of October. 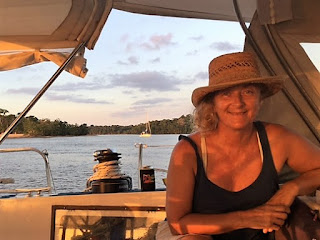 This is a last picture of our last evening anchored off the Baganara Resort.

Our journey down the Essequibo River to the coast was just as interesting as the way up.  We took a slightly different route as we approached the coast leaving by the northerner entrance rather than the southern.  We’d chosen the southern entrance to avoid the drifting fishing nets we’d been warned about by those who had been caught up in them on previous visits.

We saw no sign of fishing on our way up the river.  We were on the more trafficked southern fork.  Once on the northern fork, we began to appreciate why one might choose the southern fork despite it adding an extra 20 miles to a passage north.  We hadn’t been long in the northern fork when we saw a fishing boat and the floats of a fishing net in the distance.  Seeing them we thought there would be no difficulty avoiding them. It behoves one to remember that the tide is hustling us along two knots faster than just with engine alone.  As we got closer the fishing boat motored towards us and the fisherman was gesturing us to turn to starboard.  We were pretty much in the middle of the river and did as requested until we couldn’t see any more floats and change our course back to down river. Up came the fishing boat again, gesturing much more emphatically this time and, without really understanding why, we headed toward the starboard bank. It was just as well we did.  In time, we could see the net stretched across the whole expanse of the river and if you been anywhere other than close to the shore you’d have ended up with it wrapped around your propeller. I can’t even imagine how difficult it would be to clear it without being able to see in the café au lait water. 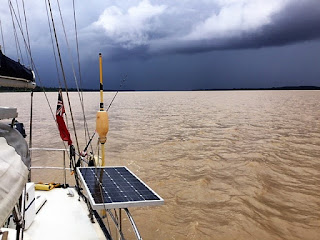 The colour of the water contrasted against one of the huge rain squalls that passed through is the one of the things I will always remember about the Essequibo River. I think its very beautiful if still rather strange.

We encountered another form of fishing anchored at the mouth of the river for the evening.  While sitting in the cockpit, Tim noticed a buoy being slowly carried up river with the tide.  Then he noticed another one much further out, and realised that this was one of the nets that they let drift unattended up and down this less trafficked part of the river.  Although the net was drifting safely past, we upped anchor and moved closer to the shore, just in case.

As it got dark, we were pleased to have moved closed to shore as it was Diwali, a Hindu festival and we were treated to a firework display on the shore.

The next morning we left the Guyana and headed north to Tobago.

It was a better sail north than south, with both the wind and tide helping us on to Tobago.  The only incident I can remember from that journey relates to how dark the nights were.  Between the cloud cover and new moon we could hardly see each other sitting on opposite sides of the cockpit.  So there I was in the dark, with nothing at all to see or do expect read my Ipad.  Suddenly there was something that I could not see fluttering right under my chin.  A rather large moth had been attracted to the light of the Ipad, which I turned off and contented myself with siting in the dark.  At some point I turned on the light in the aft head, and the moth followed me down and took up residence on our mirror. 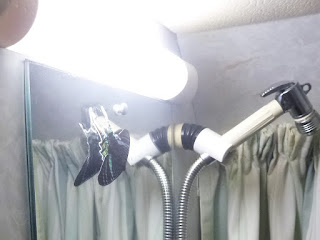 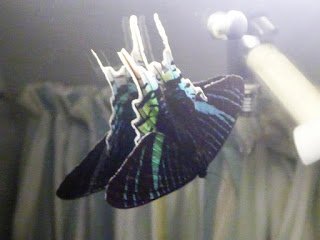 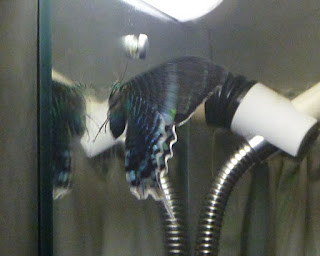 After the taking the photos, I turned off the light and 'Essie' stayed with us till morning and then fluttered off, hopefully to make her way to Tobago as well.

So back to the today the 11th of May, and we will soon be leaving Culebra for the Puerto Rican mainland.  We are going into a marina for a couple of days to provision, clean, prepare and hopefully do a little sightseeing before heading north up the East Coast of the US in the near future.

It is exciting to be on the move again and we'll do much better at keeping you posted when we have new destinations to share.