And here we are anchored off St George's anchorage, Grenada.  It's their Carnival and we're undecided about what our level of participation will be. The anchorage is quite rolly at the moment as a tropical waves pass across us.  Yesterday was heavy rain from unexpected directions.  The prevailing winds are from the East and we had winds from the West as the big dark squall clouds rolled through.  Our light sensor activated anchor light came on in the afternoon it was so dark.

Today is better, and we have laundry out to dry, which truly is tempting fate.  It's muggy and cloudy though with only light winds so another poor day for generating power via the wind generator and solar panels.  Later in the the day we'll run the generator to top up the battery and heat some water.

We met up with our niece Izzy, who has been living and working in Grenada since the beginning of the year.She gave us the whistle-stop tour and we're hoping to do some sightseeing together when the weather settles down.

(This intro was written a week ago and we'll catch you up to where we are exactly at the end of the blog.  If I have to keep changing the verb tenses I'll never get this posted!) 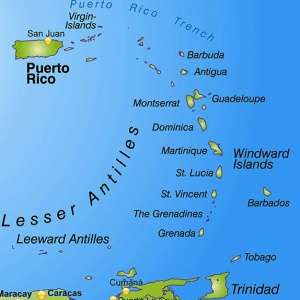 We arrived in Grenada on the third of August after slow island-hop down the Windward Islands. From Antigua we rushed past Guadeloupe, pausing there only long enough to hit the Carrefour and Leader Price Supermarkets at Pigeon Island and then on to for Les Saintes, the little dot on the map just below the main island of Guadeloupe, for our stop for the night.

The next morning, we sailed south to Dominica where we dropped at anchor off Portsmouth for just over a week, which finally took gave us a chance to do some sightseeing.  When you arrive at anchorages like Dominica in the Windward Isles you are almost always approached by 'Boat Boys'. I've never been easy with that name. Really, they are locals in boats who offer various services from getting you ice or your propane bottles refilled, or taking your rubbish away or arranging taxi's or tours. It's their job (possibly one of several like fishing) and they are often adults with families to support. Once you have accepted the services of one of these guys, you are less likely to be hassled by all the rest.  He is also a contact point and a source of local knowledge. 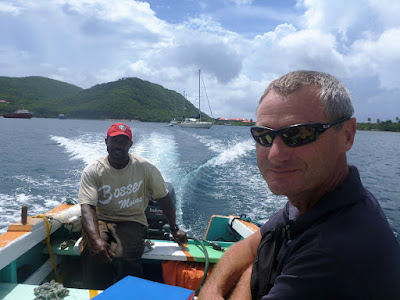 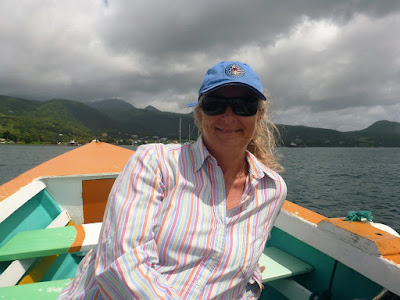 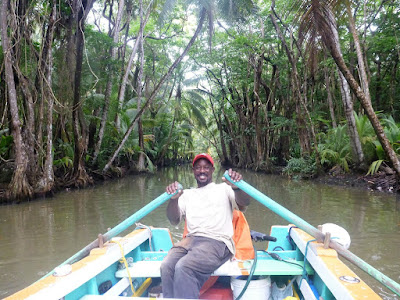 Albert was our guy for our stay in Portsmouth and along with fishing, one of this other hats was a tour guide on the Indian River.

We had heard of these tours where you are rowed up a river, and had sent some guests on them, but the only river I've seen in the Caribbean was the one we climbed up in Guadeloupe and I just couldn't imagine how it worked.

Well, it's a completely different type of river; its a tropical marsh land.


The Indian River is like a mini Amazon teeming with life – situated in the center of the town of Portsmouth to the North of Dominica.
The  river was named  Indian River after the settlements of the Kalinagos formally known as Carib Indians that existed on the upper banks  of that river.
The Indian river gushes down the Morne aux Diables  Mountain range and  meanders to the gently lowlands of Portsmouth  where it flows gracefully into the Caribbean sea. Due to its’ unique formation,  being below the sea level the water at the lower areas of the rivers  is  brackish, contributing to its unique vegetative growth and life forms.' 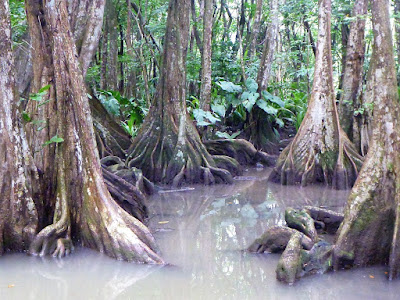 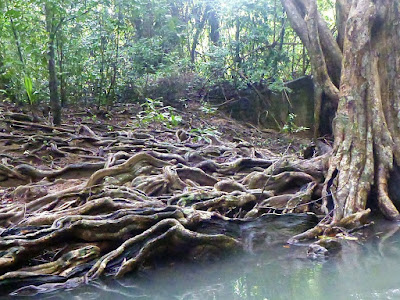 Looking at those roots, you can just imagine the torrential rains of the wet season raising the water level to several feet up the trunks. 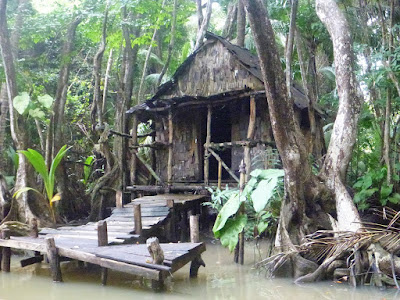 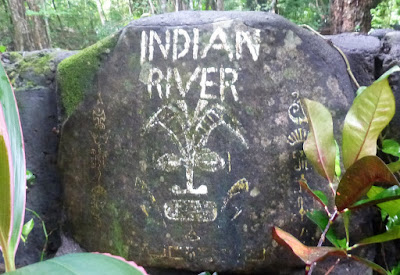 And on the right, if your a fan of the Pirates of the Caribbean, you might recognize this as the witches house in the swamp. And on the left is the sign for the Indian River Cafe, where you can eat drink and watch the hummingbirds. 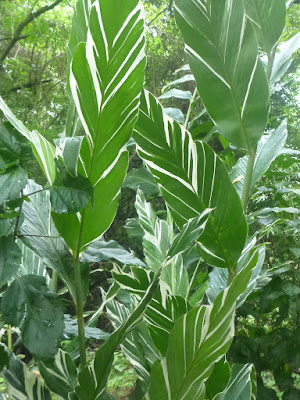 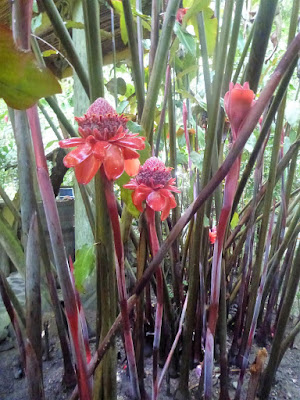 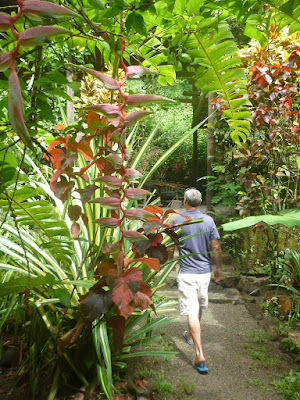 Another site we visited was the the Cabrits National Park and Fort Shirley. 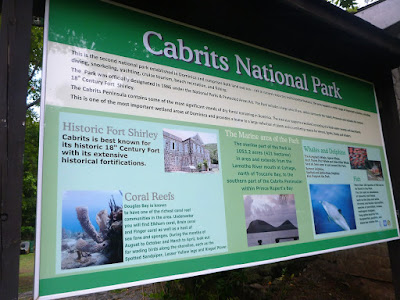 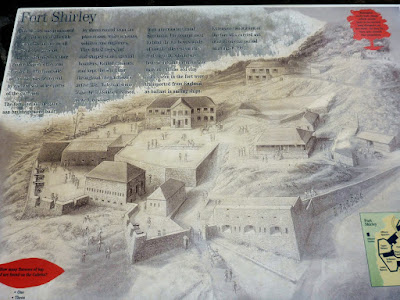 The Fort was beautifully restored with lots of places to take shelter in the frequent rain squalls that barreled across the bay. 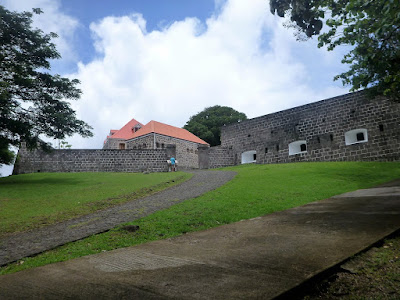 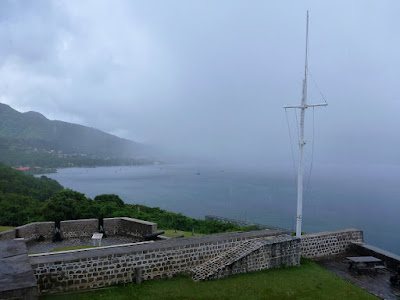 The park has numerous walking trails and the one we chose was doable even in the rain. 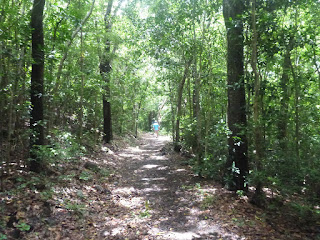 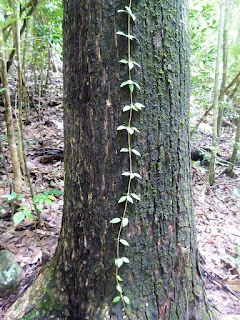 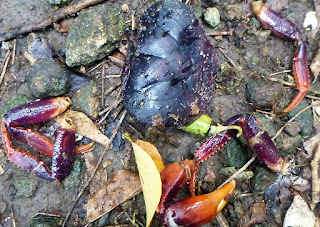 I particularly liked the Black Crabs. We never saw a live one but did see lots and lots of shells in the path.  They are obviously as tasty as they were attractive. 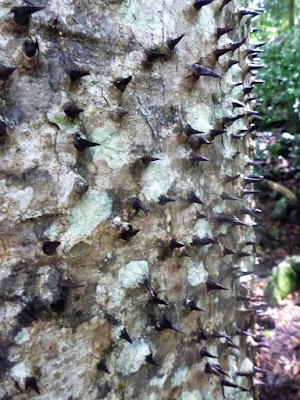 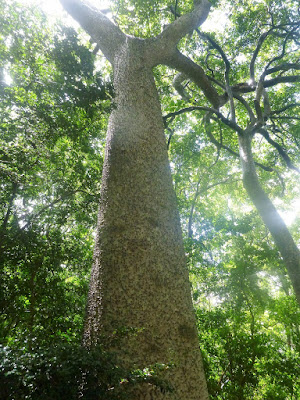 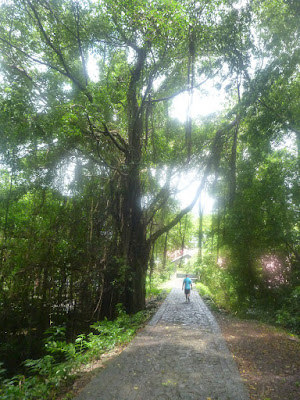 The trees are fantastic.  We were very impressed with the spiky bark and lofty canopies as well as the creepers and mosses, climbing up or dangling down from trunk and limbs.

Dominica was wonderful but when the weather changed for the better we made the short hop over to Martinique, where we stocked up for the last time on things we can only get in the French islands like lardons (diced bacon), strong chorizo sausage and some nice cheese and wonderful baguettes.

We then by-passed St Lucia and did a long sail down to Chateaubelaire on the North West Coast of St Vincent. We arrived just at sunset and were off early to arrive in Bequia by lunchtime.

The anchorage off Princess Margaret Beach was full to bursting for much of the time we were there.  We suspect the French islands had their summer holidays and many came south from Martinique.

Much of the work that needed doing on the boat was done is Bequia on this visit. We re-caulked the leaky windows.

Most impressively Tim designed and commissioned the new console for the chart plotter and instruments.  It looks amazing and in time there will be a 12 volt cigarette lighter socket in the one remaining spot on the left side of the console.

We had the zips replaced on the both the main and mizzen sail covers.  Tim also had them add an extra strip of cloth on each side to make the cover roomier and easier to zip closed. 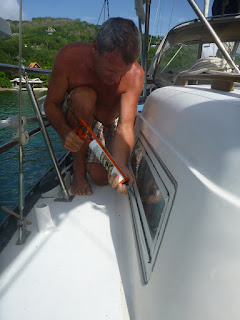 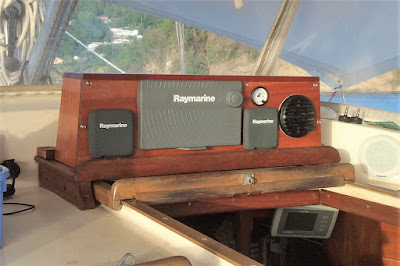 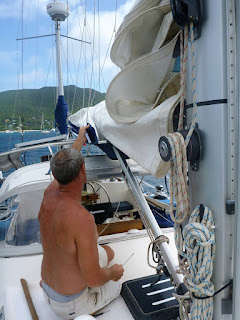 We also did a bit of scraping and varnishing, though rather than varnish we're using an oil product that should be easier to maintain.  Varnish is very unforgiving and needs a lot of upkeep in the tropics.

Bequai is perfect for snorkeling and I've become quite adept at spotting octopus.    My favorite moment was when I spotted a spotted eel in quite deep water.  It had its head down a hole and was wriggling away to get in deeper.  As I watched, movement caught my eye and I saw the tiniest octopus circling around behind the eel.  Its tentacles looked like filigree and curled so delicately around the blades of grass as it sidled away. I'm pretty sure the octopus had escaped from a backdoor when the eel came knocking on the front door.

Taking photos underwater can be very frustrating.  The water filters out the colours, the water itself is often murky and the GoPro Camera I've been taking photos with has no view finder and taking closeups can be very hit or miss. 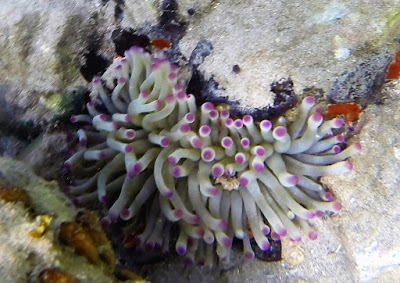 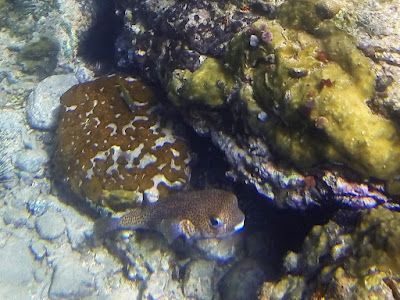 Sea Anemone with a little shrimp that you really can's living in it and a Porcupine Fish which might look small but was at least a foot long. 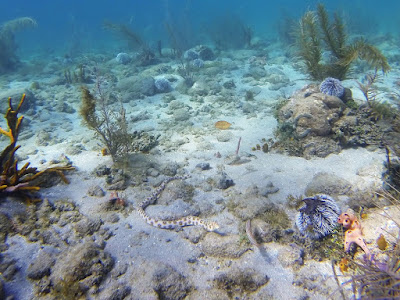 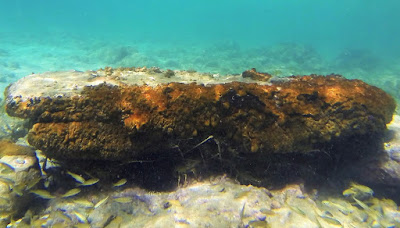 One of the many spotted eels you can see poking around any hole or hollow, and hiding under that rook are lobsters.  Lots and lots of lobsters.  The lobster season had not yet started and you could find some under almost any rock you chose to look under.

The day before when I'd snorkled sans camera, I saw a Stonefish, Black Speckled Eels, Lionfish and a Spotted Eagle Ray.  I console myself by thinking that I probably would have missed the shot anyway.

Here in Grenada now it is particularly wet and windy here at anchor in Prickly Bay.  We had a wonderful sunny day out yesterday, Saturday the 14, with our niece Izzy, who gave us the Grand Tour of Grenada.  This blog, however, is quite long enough and I dont want to skimp on the telling so I will save that for the next. We will be heading for Trinidad within the next day or so and will write up Grenada once we're there.