Back into cruising mode with a new blog site

We've switched blogs! This one is easier  for us to deal with and we think the 'commenting' will be more satisfactory. To view any previous posts just click on the link on the right.


Hmm… we are now in Guadeloupe soon to be on our way back to Antigua so there seems to be quite a chunk missing from our blog.


Firstly, we are on our way back to Antigua so that Tim can finish of the oral exam part of the Yacht Master Ocean course.  Once he’d completed the first part of the course, way back in March, we headed to St Martin where Tim covered the base while the manager was on holiday.  During that time that, I flew back to Canada for an extended stay to visit and get some dental work done.  I had a much lovelier time than Tim, but he got through it, and on the 23rd of May we left Fort Louis Marina headed directly for Martinique.


The reason we were sailing straight to Martinique, a two-day passage, was to be offshore long enough for Tim to get all the sextant sights he needed to complete the course. It was a good plan except for the fact that the sailing was pretty miserable.  We were on a fetch (one long tack) in moderate winds and in an uncomfortable sea.  We were both rather out of shape for living life on a 15 degree angle and I was feeling it. Guadeloupe, only 6 rather than another 24 hours away was developing a very alluring je ne cést quoi. 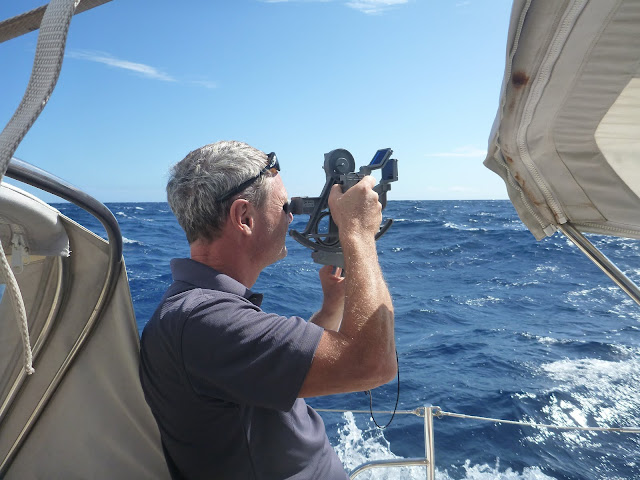 Tim had got all his sights done, moon, stars and noon so there really was no reason to carry on if we weren’t enjoying it.  And we weren’t, so we didn’t.  We changed course for Deshaies on the north west corner of the Guadeloupe and arrived late afternoon of the 24th with that beaten with a stick feeling you get after a tougher than normal workout.


And this was our route. 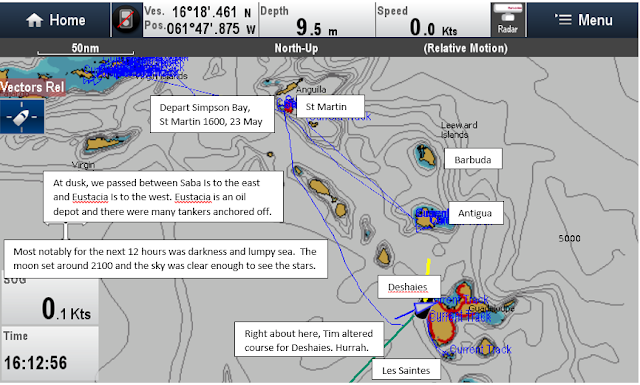 After a couple of days in Deshaies, we head down to Les Saints via Pigeon Island, where we anchored over night.  Pigeon Island is within the Jacques Cousteau Underwater Reserve Guadeloupe and the snorkeling and diving is very good.


We sailed for Les Saintes on Sunday the 29th and anchored off La Tete Rouge.

That's La Tete Rouge on the left and Larus to the right of it.
There fewer and fewer spots to anchor in the Saints every time we visit.  A favourite bay to anchor in is next to Le Pain de Sucre, a spectacular rock formation, and most of the anchorage has been converted to a mooring field.  You can anchor behind the yellow buoys but the depth is generally too deep. 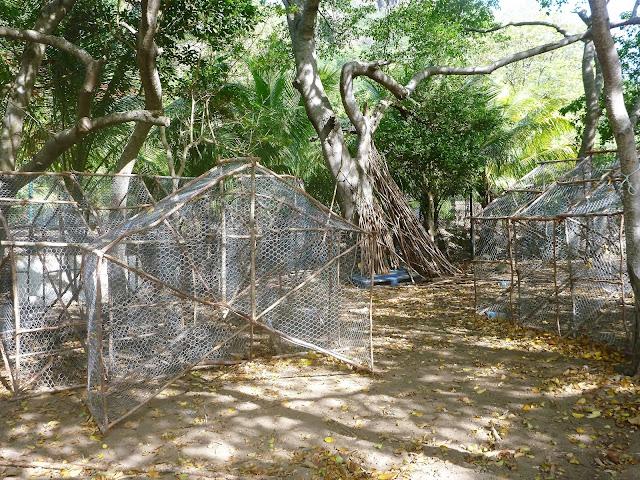 Although we'd seen the fishing cages the day before, there was no one about so I could take my time getting photos.  The sticks leaning against the tree in the background are what is used to make the frame for the chicken wire. 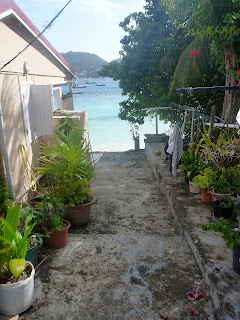 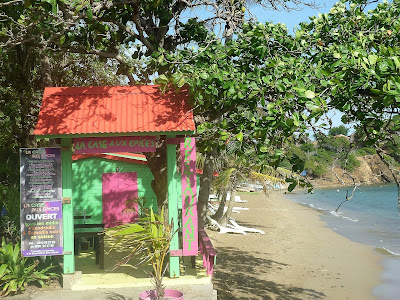 Grand Bourg, the only town in the Saints is, not surprisingly, very picturesque and it follows the curve of the bay right around to the beach next to La Tete Rough. 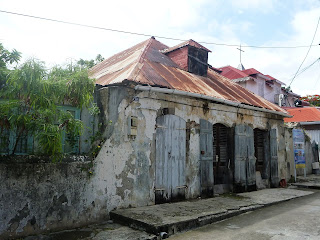 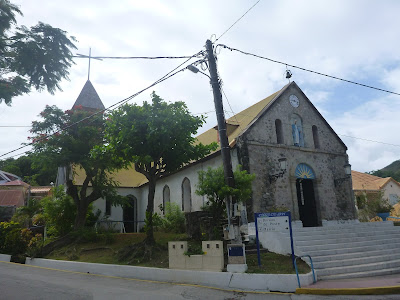 Behind the town where the terrain becomes more mountainous were groups of houses between fields. The photo below on the right is a goat field.  You can tell the fields that have goats because there isn't a slip of greenery to be seen. 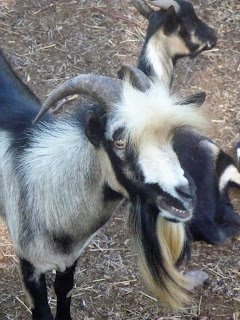 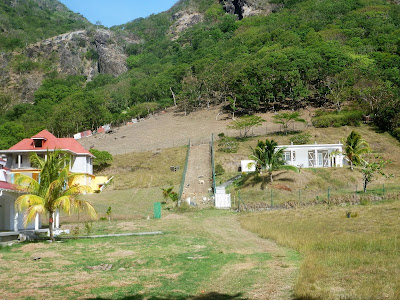 ("Not by the hair on my chinny chin chin," said the Billy Goat Gruff.)
Most of the goats are well and truly fenced in, but there were some exceptions. 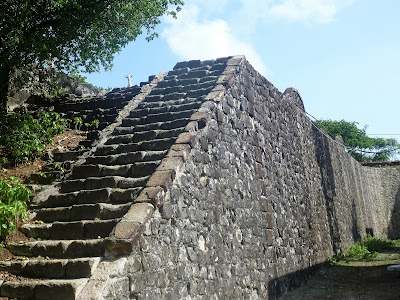 They've even posted a look out.' 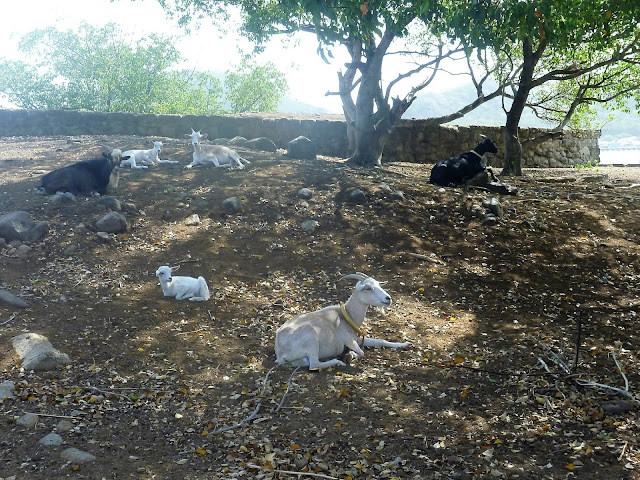 This must be what goat heaven looks (and smells) like. I did wonder what they do with all the goats.  I hope they have a thriving local cheese trade. 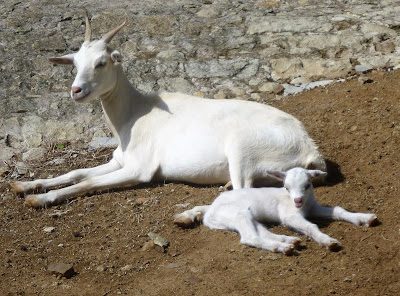 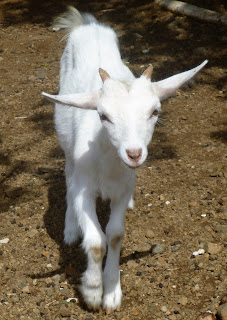 I know, probably too many photos of goats.


These walks were to the south of the main town on the way to, but not as far as, Le Pain de Sucre.  We hadn't visited this area before and really enjoyed it.  When we head south again, we'll definitely have another look around Les Saintes.