Back in Deshaies, we did a walk that we’d heard about and read about but had never done. We walked up a mountain by way of the Deshaies River. 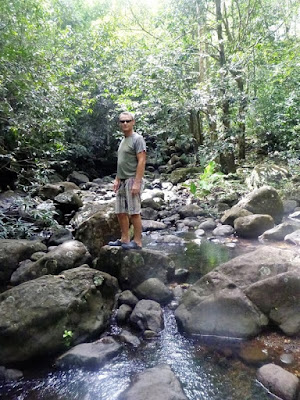 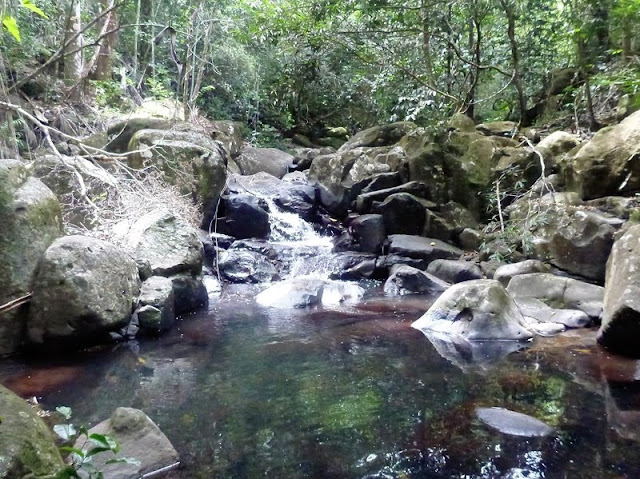 The two hour hike wound its way up the river bed to nearly the top of a rainforest covered mountain. 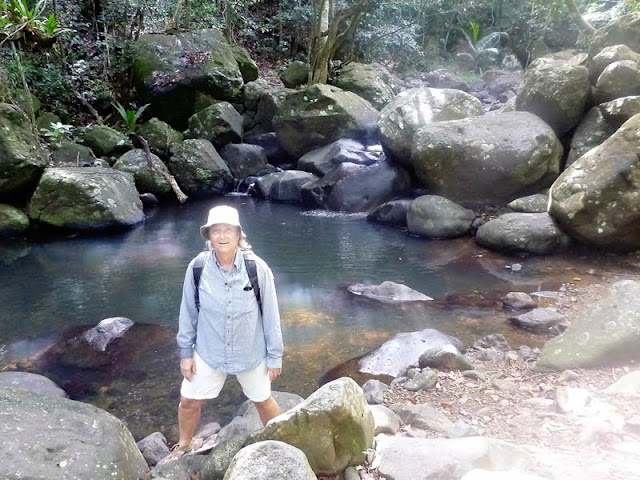 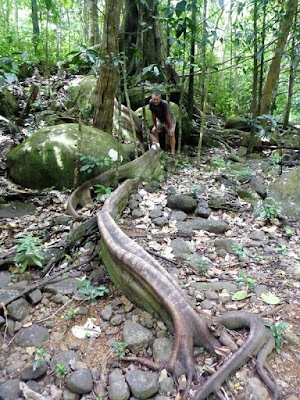 I have to admit, that by the time we got to the road, which is your route back down the mountain, we opted not to do an extra 20 mins there and back to a waterfall, cus I was pooped. We'll save that for next. 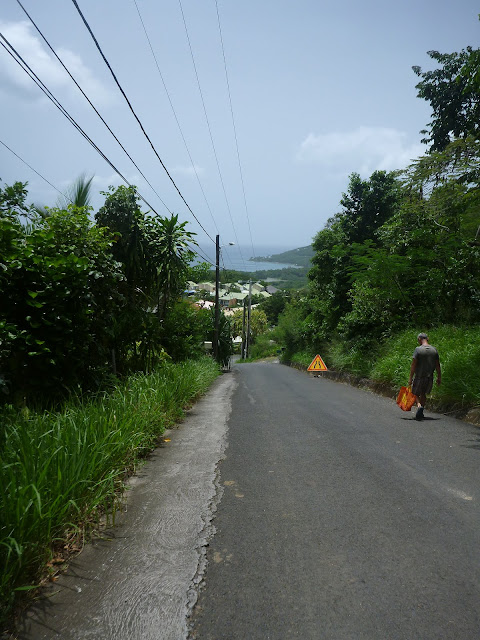 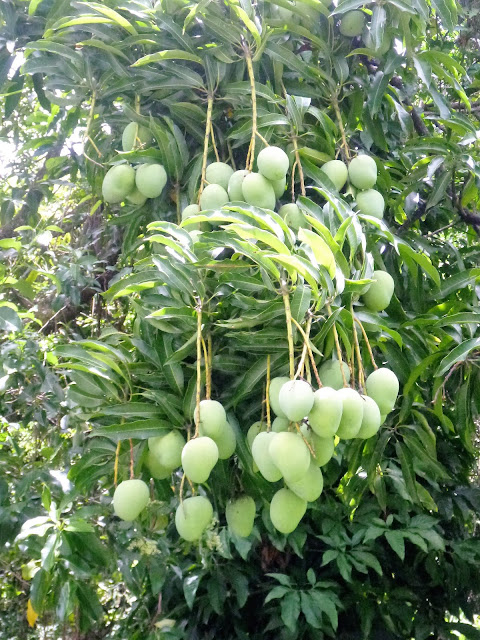 This was the road down the mountain and the walk felt almost as long as the climb up. I did manage to gather some windfall mangoes on the way down. The mango trees were huge and it is a long drop for a ripe mango, but I managed to gather a few and made a mango ginger sauce to go with my homemade yogurt. It was very nice. (Right now in Antigua, everyone and their mother is selling mangoes. It must be the peak of the season because you really can't go very far without someone trying to sell you a bag of mangoes.)

Later in the day we had front row seats for a group of fishermen, two in the water herding fish and 4 on the boat managing the net. 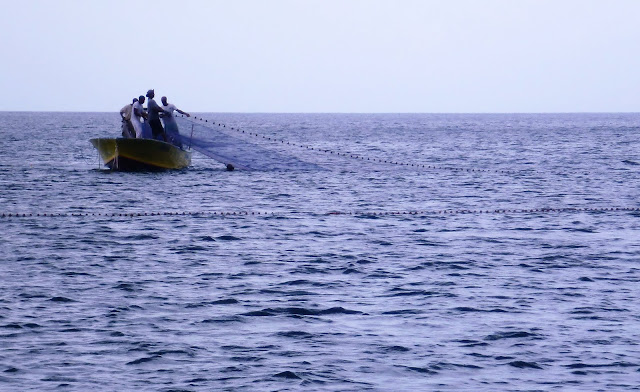 We often see the local people fishing in the off season in the bays and off the beaches which are normally full of anchored yachts. I don't know if they fish elsewhere during the tourist season, or if they work in the tourist industry and go back to fishing when the that source of revenue dries up.

On Saturday the 4th of June we left Deshaies in the early morning and headed in a northerly direction to Antigua. In the wind-shadow of Guadeloupe we had light winds and Tim put out our fishing line.

We have caught fish between Antigua and Guadeloupe on other passages, and the last time it happened we had to abandon the fish we'd caught because the wind came up strongly and suddenly, and I didn't feel like filleting a fish while 'over on our ear'. This journey start out with much less wind than we usually experience, so when the fish bit and Tim landed it, I was ready on the aft deck with a cutting board and my sharpest knife. I had just managed to take off the first fillet when the empty bucket we put a freshly caught fish in, made a dash for the side of the boat. The wind had come up and we were suddenly over on our ear. 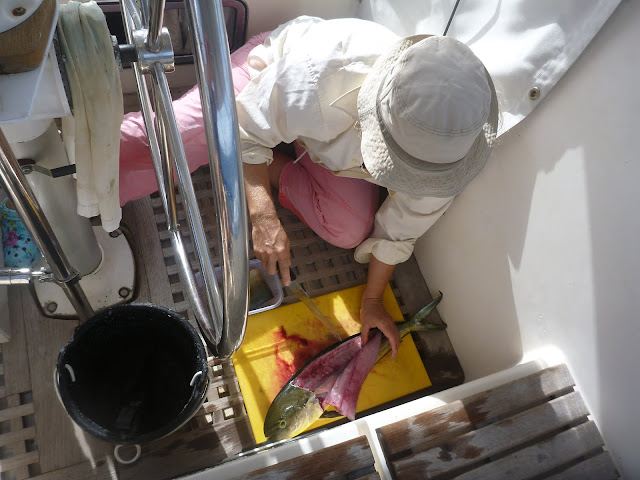 Tim quickly reduced sail and we passed bucket, cutting board, knife and fish into the cockpit, where I finished the job. It was a small male Mahi Mahi, as you can tell by the beginning of the bump on his forehead, and we grilled the fillets on our new BBQ in Jolly Harbour. There really is nothing quite like fish that fresh.

Tim got the BBQ while I was in Canada and it has been such a treat cooking on it. We've had burgers a couple of times and I have a pork loin that will make marvellous souvlaki. 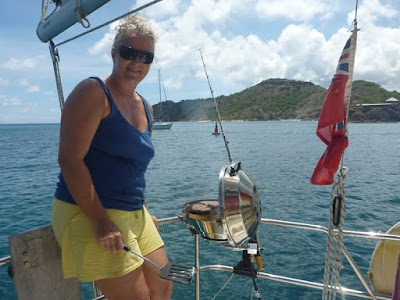 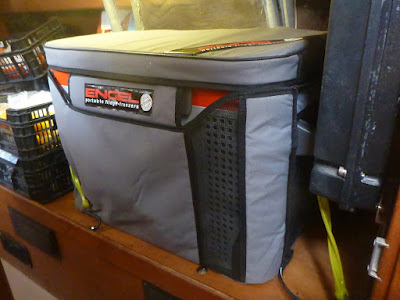 We also have a small cooler type freezer that is truly changing the way we shop and, most importantly, how often we can have ice cream. :)

Once we'd managed to clear in to Antigua, (We arrived about 1600 Saturday afternoon and were just in time to see the Port Authority lady closing up shop an hour before she should have. We were able to clear in with Immigration and could, therefore, go to the very good supermarket in the marina. We came back Sunday when the Port Authority was due to open and hung around on the Customs Dock until we were asked to leave. Monday everything was back to normal and we were able to finish our clearing in), we sailed around to English Harbour and spent a few fun days with friends on other boats.

Monday, the 13th of May, we headed north for Barbuda, the other half of the country which is called 'Antigua and Barbuda.' Small islands are often grouped together with a larger neighbour for administrative purposes, like Trinidad and Tobago.

Barbuda is a low lying island to the north of Antigua. We had a lovely 5 hour or so sail averaging 6 and a half to 7 knot over the ground. Barbuda is so low lying that we couldn't see it on a clear day until we were less than 5 miles off the coast.

Honestly, it is hard to find a more pristine beach anywhere. We didn't have the 13 miles of beach to ourselves but we could only see them if we squinted.

Our friends, Peter and Betty, who had been here the previous week had seen horses roaming the beach. We didn't, this the exception of a pile of droppings on our last day down at Coco Point on the south end of the island.

During walks along the beach, we did see some pretty darn interesting things. 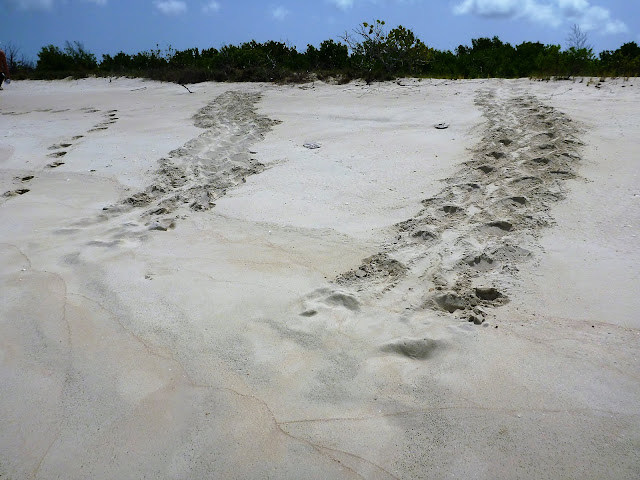 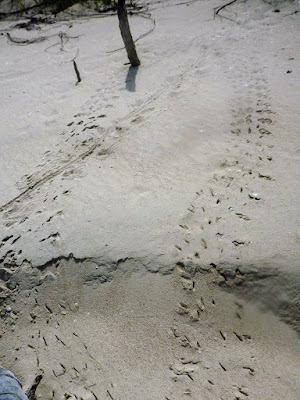 We are pretty sure that the first photo is of turtle tracks leading up the beach to where the eggs were laid, and the then the far tracks are of her sliding/finning down the beach back into the sea. We are less sure that the photo on the left is of the little flipper marks of baby turtles as they make their way down to the sea but it would make me happy if it was..

All this activity happens at night, and although the beach glowed eerily in the moonlight, we didn't feel the need to disturb them.

I did wonder if we didn't see any horses because they encourage them to be elsewhere on the island when the turtles are nesting.

The warm shallow water seemed to be something of a nursery for baby Lemon Sharks. 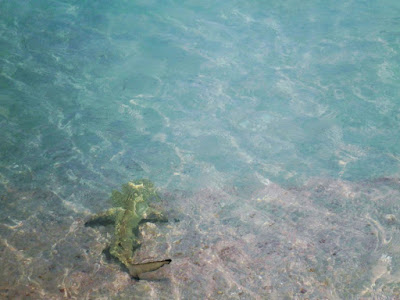 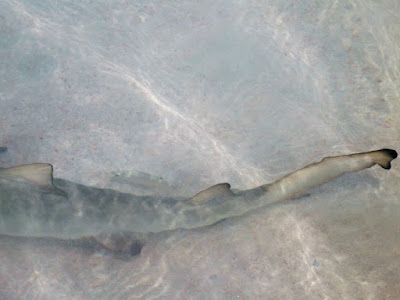 They were so close to the shore, maybe a dozen of in total, but they were very fast and very skittish. So this was the best I could do. 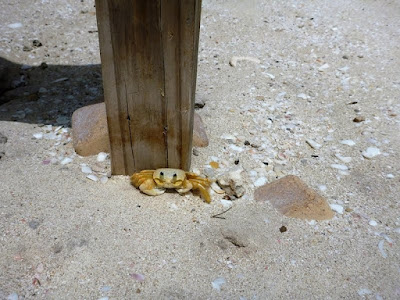 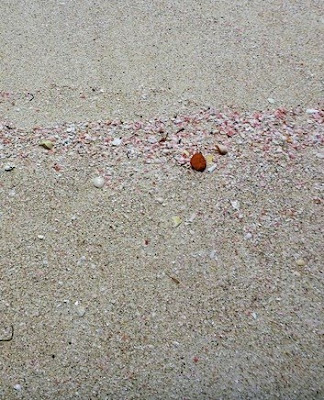 Unlike this little fella who just sat and stared. The photo on the right gives you a sense of the pink in the sand.

I have a little more like to post but the formatting is starting to misbehave, which seems to happen when it gets to be a certain size, so I'll save it for the next blog.
Posted by Tim Chapman at 08:17