The people of Fiji are extremely friendly. ‘Bula’ or even ‘Bula Bula’ is the traditional Fijian greeting and we hear it all the time. People are very welcoming even outside the marina. When we  first arrived on the customs dock, after we’d had our Covid RAT, cleared in with customs and immigration a group of 15 or so marina staff arrived on the dock to sing us a song of greeting.  Eventually, we were moved to our current location in the inner basin. 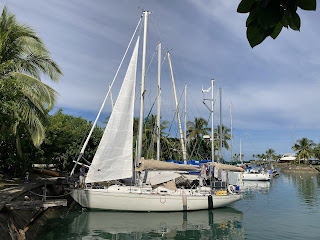 This is our new staysail drying after a fresh water rinse. It is very humid here it took a long time to dry and we had many people stop to comment on what a fine looking sail it is.
It is hot here, particularly in the marina. Out at anchor will be cooler, but in the basin little breeze gets past the lush foliage. It is so hot we have ordered and other wall fan on the back of Colin’s, on Burmese Breeze order of 10.  Last night I had to resort to sleeping under a damp towel with the fan trained on me, a technique I first used in the Caribbean. Tim isn’t as bothered as much by the heat.
It is very Indian with a mix of people of Indian or African descent.  It’s feels very like Trinidad in some ways.  We went shopping in city of Lautoka, where you can find all manner of foreign supermarkets (air conditioned) as well as Fijian supermarkets (not air conditioned). It’s an interesting mix of East and West. We walked along the long harbour wall and spotted this Russian super yacht which has been impounded by the Fijians. It is purported to belong to one V. Putin.
The open air market was huge and needed a lot more time spent on it than we did. We had a taxi driver waiting with the meter running. He knew where to buy the cheap beer.
Tomorrow, we are taking Larus to Denarau Island (just a short motor to the south) with Colin on BB. The tubes on his dinghy are becoming detached and there is a guy in Denarau who can sort it out for him.  We will anchor off, tow Colin’s dinghy to the shore and then put Colin back on BB. We will then stick together so he has a means of getting ashore and we’ve missed his company. There is another supermarket in Denarau so I will pick up a few more things to keep us going.
After that, we will head to a resort island to anchor off so we can swim and acclimatise.
Another yacht, Hullabaloo of Normandy, that we have met in the past are coming out to play as well.
More to come as we get over what feels very much like jet lag with a side of heat stroke. Lol.
Many thanks to everyone for following us on our passage and for your good wishes.
X Nancy and Tim