Since we first arrived in Whangarei in late 2019, I've been fascinated by the building of The Hundertwasser Art Centre. From a berth in Basin Marina, you are always aware of it on the cityside of the Hatea River. We've seen almost all of the building of it and I was a rather disappointed that the date for completion was December 2021.  At the time I accepted that there was just no way we would still be in NZ two years times and yet here we are for the foreseeable future.

The last few months of building work had been the most interesting. 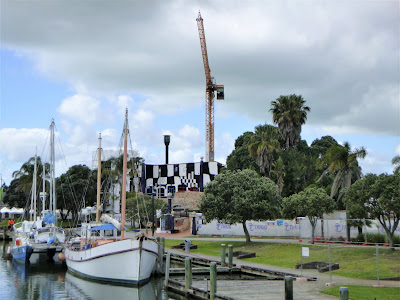 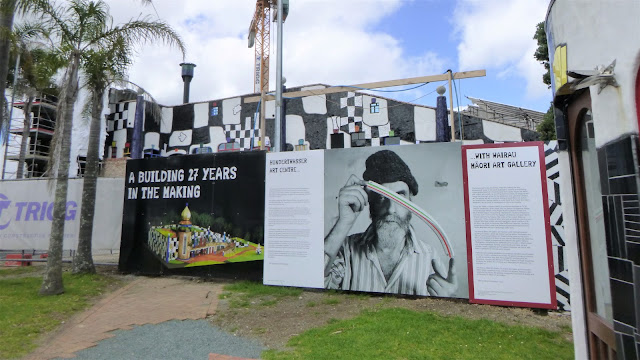 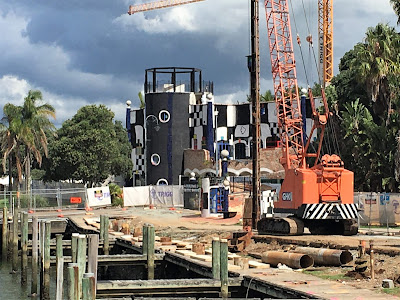 The wooden pier from the first photo, much of which was condemned, is being replaced with a new boardwalk but that is still to be completed.
This video isnt's really about the building work as it's there in the background I decided to include it.  In the autumn, once the marina is less full of boatrs, dredging work begins and goes on for a number of weeks.  The river silts up quite badly and this is done yearly.  The tug and digger on the barge work together to manuevre themselvers into position.  A post is driven into the river bed to keep them in place and the dredging begins.  They do this between all the pontons as well the main path of the river through the marina.

I selected one event for each year of the biography in case you thought his biography might be dull.

1936 - Attends the Montessori School in Vienna for one year.  His report refers to his unusual sense of colour and form.

1949 - Develops his own style and adopts the name Hundertwasser.

1958 - Reads his Mouldiness Manifesto against Rationalism in Architecture at a symposium in Seckau monastery on 4 July.

1967 - Nude Speech for The Right to the Third Skin at Galerie Hartmann, Munich.

1976 - Sails on board the Regentag from Tahiti via Rarotonga to New Zealand.

1983 - Designs a flag for New Zealand, the Koru, an unfurling fern.

1993 - Paints in New Zealand, works on the Hundertwasser Bible project.

2000 - Dies of heart failure on Saturday, February 19, in the Pacific, on board of Queen Elizabeth 2. In accordance with his wishes, he is buried in harmony with nature on his land in New Zealand, in the Garden of the Happy Dead, under a tulip tree.

I CLOSE MY EYES HALFWAY
JUST AS WHEN I CONCEIVE PAINTINGS
AND I SEE THE HOUSES DUNKELBUNT
INSTEAD OF UGLY CREAM COLOUR
AND GREEN MEADOWS ON ALL ROOFS
INSTEAD OF CONCRETE.

I AM LOOKING FORWARD
TO BECOME HUMUS MYSELF
BURIED NAKED WITHOUT COFFIN
UNDER A TREE
ON MY LAND IN AO TEA ROA.
Hundertwasser, 1979