After leaving Whangarei and between weather windows, we made our way back up to the Bay of Islands, via Tutukaka. Tutukaka is about a 4 hours sail north from Urquart's Bay. With strong winds and a rough sea forecast from the SW, we popped into Tutukaka for two nights.  It was very pleasant to be happily, if gustily, anchored well out of the large seas we could see thundering past the harbour entrance.

The next day with a reasonable wind direction and the seas reducing in size we finished our passage up to and around Cape Brett and into the Bay of Islands.  The sail up to Cape Brett was one of the best we've had in a long time.  We were on a close hauled beam reach, which is our fastest point of sail. A slight current was with us, we had a quite a flat sea except for 1 metre swell that gently propelled us forward another knot or 2 in speed so that at times we were making NINE KNOTS.  We never make 9 knots, so to be able do that in such comfortable conditions is memorable.

Sailing can be more or less enjoyable for all sorts of reasons.

A flat sea and comfortable motion and the right amount of wind from a good direction that allows you to sail a direct route, meaning that the wind not on the nose.  But we don't want it directly from behind either as a running before the wind is a slower and often very rolly point of sail.

Warm and sunny beats cold and wet and, I think, warm and wet might well beat cold and sunny depending on just how wet and how cold we are talking about.

Heeling at a comfortable angle so that you can make a sandwich or use the toilet with relative ease.

Day sailing so we can both sleep at the same time and going a good enough speed so that you aren't tempted to turn on the engine or that you aren't slowing down the closer you get to your destination.  It is very discouraging to see the distance continue to reduce while your arrival time gets farther away.

Long distance sailing is similar but the length of time it takes changes your perception.  Far a start, if you arent enjoying the conditions, they'll change in time and you'll just have to wait it out.  What you will have is time to get into a routine and everything slows down.  Sailing off shore with no chance of running into any land at all for days or weeks is in itself very restful.

With our latest New Zealand Visitor Visas extended to January 2022, we won't be going any great distances just yet.

We are currently anchored in Assassination Cove.  The website, NZPlaces.nz, under the link says of Assassination Cove,  'French explorer Marc-Joseph Marion du Fresne was slayed and possibly eaten here in 1772.'  This is not why we came.

Our reason for being here is the very good protection it provides from an Easterly gale which will blow over the next 48 hours on and off.  There are about 10 boats anchored in the area as well waiting for this weather system to pass through.

While we're waiting, its a good time to show you some of my favourite New Zealand things - their public Toilets.

When I made the Hundertwasser post I didn't have a photo of 'the Seed', and this was taken by my friend Susan who visited in December 2019 into January 2020. 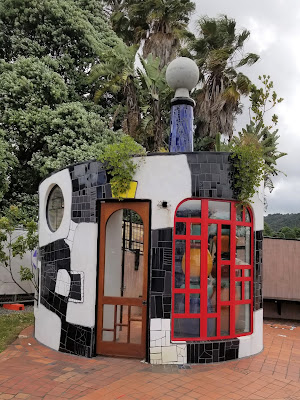 Seed was a taste of what to expect from the finished Hundertwasser Art Centre. My interest was piqued by the artist and later when my sister, Laura, arrived in January 2020 we made a visit to the Hundertwasser Toilets in Kawakawa. 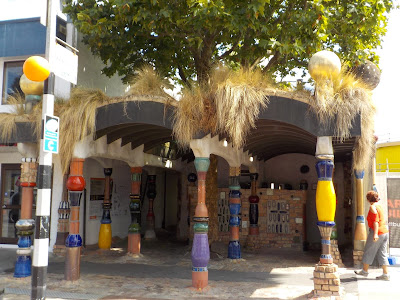 Tada! There is a tree growing through the building and a roof garden, which is a Hundertwasser theme. 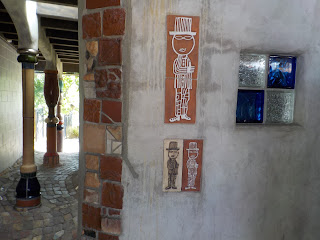 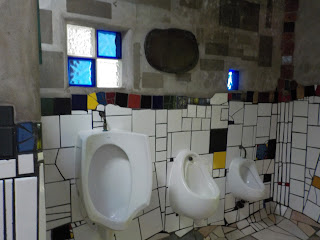 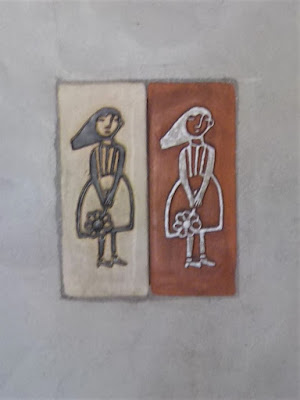 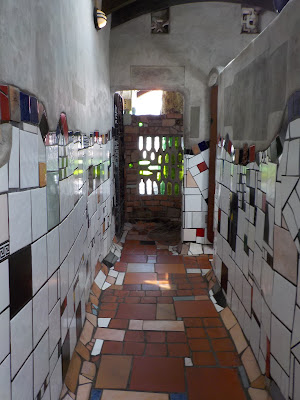 A wonderful glass bottle window at the end of the corridor. 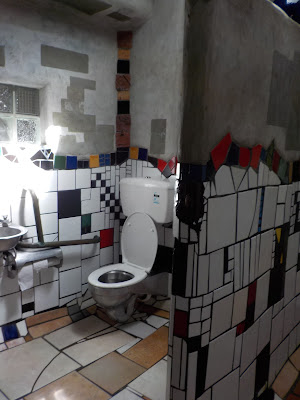 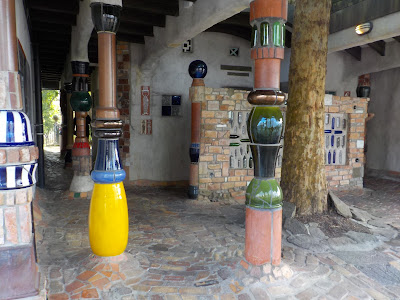 I'm very much looking forward to the opening of the Hundertwasser Art Centre in December. 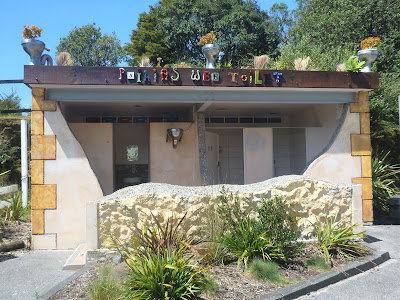 Paihia, north of Kawakawa, is our Bay of Islands shopping anchorage. They got creative with one of their Wee Toilet on the waterfront.  I particularly like the roof top flower pots.
Even farther north, the Far North of Northland in the North Island, Laura and I found the Centennial Playground Kaoe.  The link gives you a 360 degree view of the playground and Church. 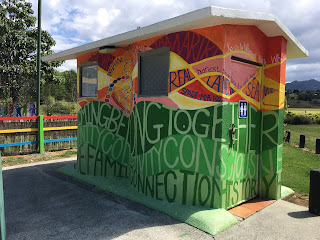 You can tell from the outside that it's going to be equally special on the inside and it did not disappoint.

The star of the mural is the Pukeko and you really can see them everywhere, real and in paint. 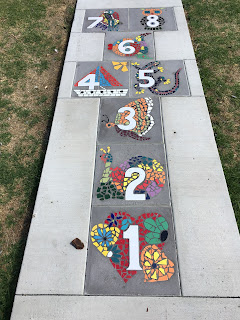 The Playground also had a very fine Hop Scotch board.

About halfway between Whangarei and Auckland are the famous Matakana Toilets.  Laura and I took an enourmous detour to visit them after spending the morning watching sheep shearing at Sheep World. 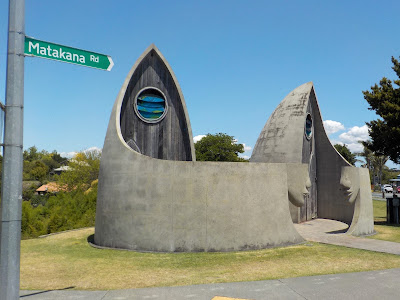 The detour was worth it. Perched above the Matakana River, carpark and picnic area and on the main Matakana roundabout is this very impressive public toilet. 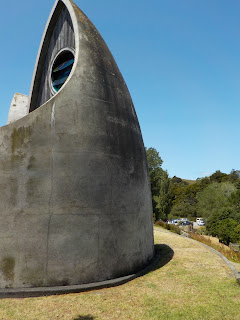 It is quite a hike up from the carpark. 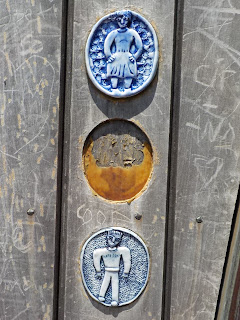 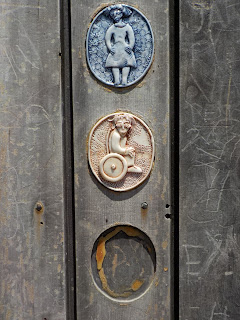 The symbols outside the toilets were handmade and each one individually made. Someone else like them too as they stole a couple. Shame on them. 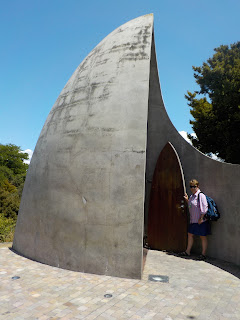 The interior doesn't quite live up to the exterior, but they were clean and they worked. 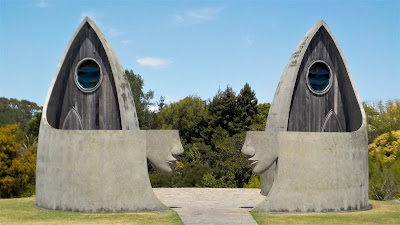 Unfortunately, to get this view you have to stand in the middle of the roundabout and we have found that pedestrians are given no leaway, but I think I was worth it.

Susan and I found the most in touch with nature public toilet on a walk to Soda Springs on the foothills of Mount Tonagriro. 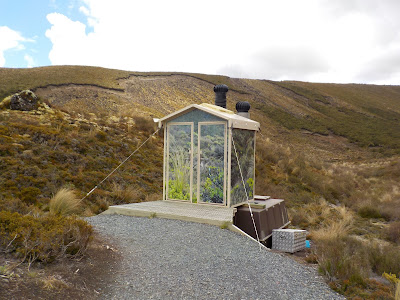 This really is a state of the art eco-friendly facility.  You even had to bring your own toilet paper. You are warned of that at the start of the trail.  I like that it blends in so well the its environment and has guy wires to stop it from toppling over a strong wind.

Last but nearest and dearest to the hearts of Susan, Laura and myself are the Helensville Public Toilets.

State Highway 16 passes through Helensville and is an alternative route, which avoiding the Auckland City Centre, and a convenient stop between Whangarei and Auckland Airport.  The drive from the east coast to the west coast is a lovely change from State Highway 1 and all its roadworks. These roadworks have been underway since we arrived in Nov 2019. In their defense, it can't be easy widening and repairing roads in a country that was formed by volcanism.  In fact it's hard, damn hard.

On the way south from Whangarei, you take a right at Wellsford onto SH 16.  State Highway sounds very grand when it is two lanes only as are most of the SHs outside of those servicing Auckland or Wellington. The road winds its way over ridge backs, down into valleys, over rivers and past fields with many places to stop and look at the views.

About halfway to Helensville if you keep you a look out to the west you will see a large areas of grazing pastures scattered with at least 20 sculptures large enough to be seen as you drive by. 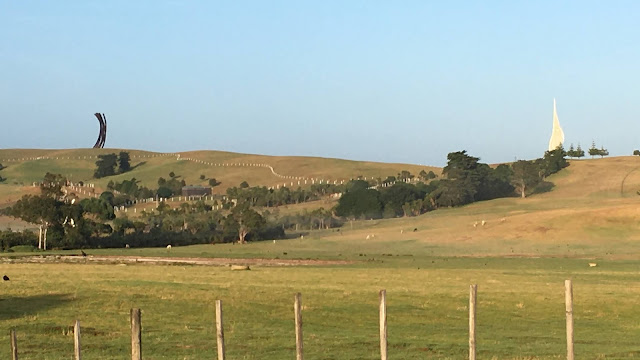 The two in this photo are easy to see. 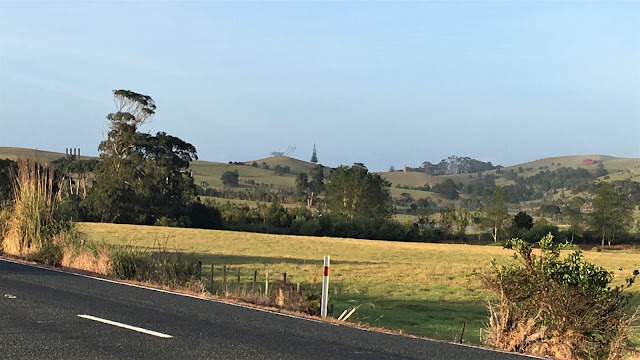 I think there are four in this one.  From left to right - 1) the four uprights, 2) the back figure on the hill top, 3) a yellow cone like thing, and 4) the red lump on the far right.

I read that the land isn't open to the public except on very rare occasions as it is a working farm.

It didn't occur to me to take a photo at the time of the Helensville Public Toilets as they look like just any block of three stainless steel toilets, but they are very much more than that. With a press of a button the door glides open.  Another press to close it and a calm and reassuring voice tells you how the toilet operates and that the door will open in 10 minutes time, ready or not.  Then the music swells and you have the pleasure of listening to an instrumental version of the What the World Need Now Is Love Sweet Love.

We are still anchored in Assination Cove.  There is still a gale blowing but we are well protected and though we have experienced winds of 30 knots, gusting 40 occasionally it is due to calm down this evening.  We are anchored in about 5 metres of water with 80 metres of chain.  Lots of chain keeps the anchor being plucked out of the seabed because of strong gusts and that in turn means that every horizontal tug on the anchor by the swinging of the boat causes the anchor to bury itself further and further into the seabed.

We aren't going anywhere! We will probably have to drive Larus over and around the anchor to loosen it from the mud before we can haul it up.  .