To market, to market

New Year's Day, camera in hand, I walked to the Whangarei Growers Market in search of grapefruit.

My route started from our berth on the far side of the Hatea River in Town Basin Marina.  The yellow line is my route, the red star marks my favourite shop and things of interest are circled in red. 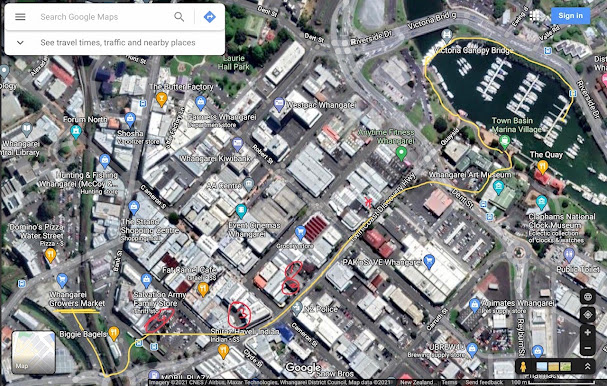 About four weeks ago, hand-knitted and crocheted works of art and craft began appearing along the Hatea Loop , a 4.2 km walk along the banks of the Hatea River.  They are just the thing to lift the spirits.
I started at the gate to Pontoon D where Larus is berthed. 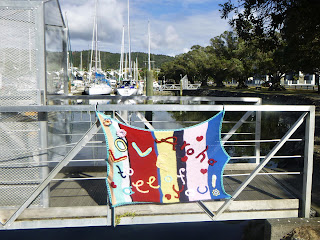 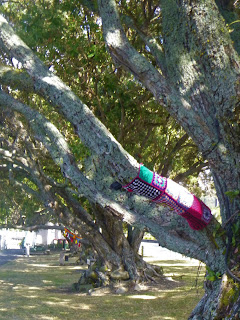 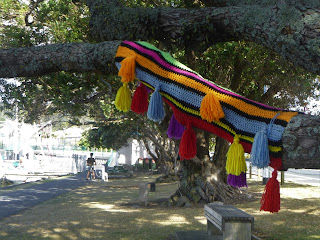 I do like the tassels.
Our toilet, shower and laundry block is in the background.  All the water fountains have a square bowl near their base for the dogs that accompany the walkers, runners and cyclists who use the Loop. 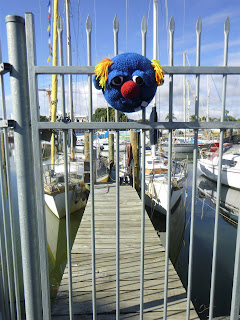 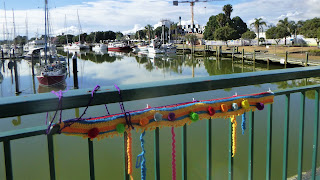 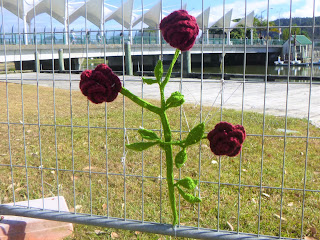 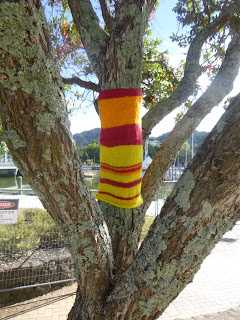 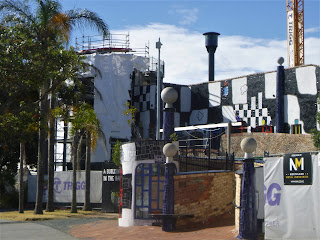 The Hundertwasser Art Centre hadn't long been started when we first arrived in New Zealand,  September 2019. The tower is yet complete but the Art Centre is expected to be open by the end of 2021. We don't expect to be here for the opening, though I would very much like to see it finished and open to the public. 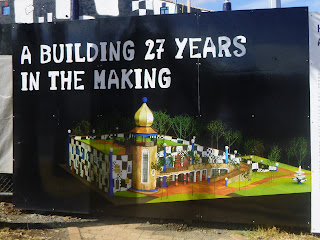 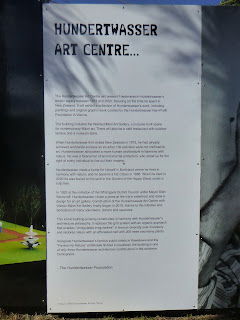 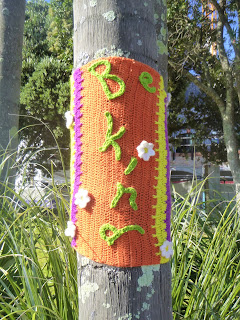 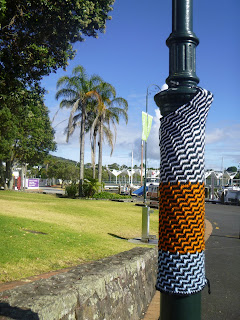 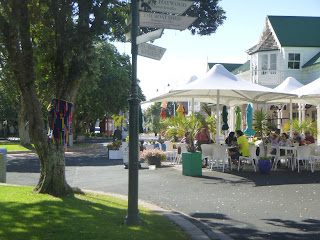 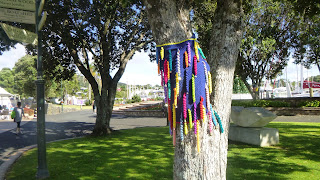 The dangling spirals are fun. 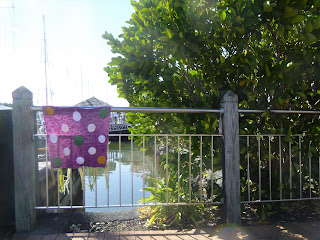 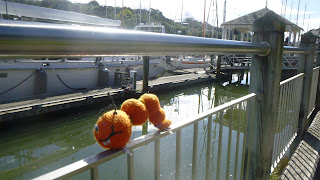 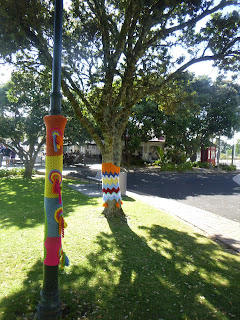 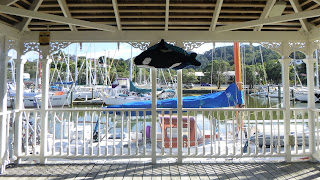 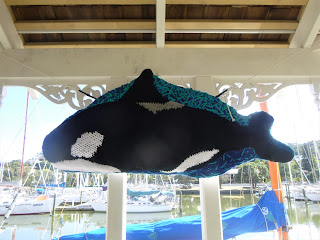 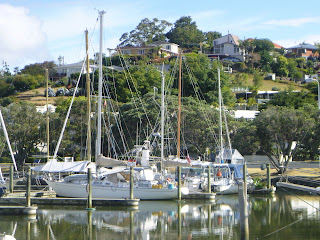 I turned inland on my walk to the market after taking this rather lovely photo of Larus in her berth.  Or is it a photo of lovely Larus in her berth?
When we first arrived in Whangarei, I was awed by the quality and quantity of the street art that decorates the city.  What I didn't know was that all the murals were thanks to the Street Prints initiative.  Follow the link to see many more of the works of art that have decorated the city since they were created in 2019.
It is says a lot about Whangarei, and New Zealand in general, that all these works of public art are still pristine, intact and in place.
As it was New Year's Day and very few shops were open, there were few cars to obscure the murals.  I walk past all of these regularly and it was my first unobstructed view of them.

The expression on the Maori girl's face is one that is used in traditional dance.  Read here for Maori Dance symbolism explained and watch here to see traditional Maori dance.
The design on her chin represents a traditional Maori Tattoo all of which have spiritual meanings. 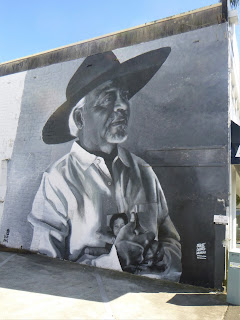 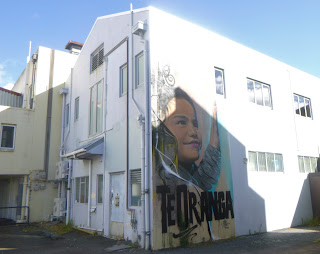 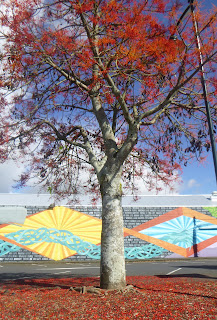 And finally the market.  I was quite late as it opens at 0630 and many of the stalls were packing up when I arrived. 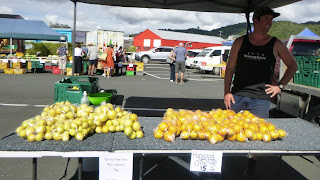 There were no grapefruits to be had.  The farmer on this stall told me that during the Once in 500 Year Storm in July last year, severe flooding caused the grapefruit trees to spontaneously drop their fruit. He suspects the fruit was sacrificed to save trees themselves.
I contented myself with bags of oranges and lemons and wishes for a better crop of grapefruit later this year.
Last but not least, we received the most inspired Christmas present.  After dinner out on Christmas Eve with our friends Rob and Frances from Alia Vita, Rob handed us a small flat square gift wrapped package.  When we opened it, we were completely astonished to find four coasters printed with a reproduction of an oil painting of Larus at anchor on them. 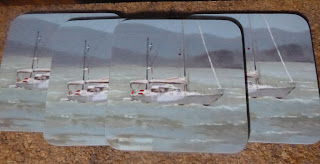 It was serendipity that Rob had been looking through the Opua Facebook page and saw an oil painting of Larus in an advertising post by a local artist who he contacted the artist to ask about the painting.  She had thought Larus pretty, had taken the photo while we were anchored off the Bay of Islands Marina a few weeks previously and had only just sold the painting.  The artist gave Rob permission to use a screen shot from Facebook however he liked and the coasters are the result.
I am still amazed every time I look at them.  Not only do we have wonderful coasters but someone out there has an painting of Larus on their wall. I could almost get my head around a watercolour, but an oil painting?!
I'll end now by wishing everyone everywhere a safe and prosperous 2021 from the both of us.
Nancy and Tim