We've been out and about more recently as the weather gets warmer (we haven't had to put on the heater in several weeks) and more settled. Today, however, it is blowing a gale but we are all snugged up in West Haven Marina.  We had a short walk yesterday along a small part of the marina board walk and hope to see more of Auckland tomorrow.  The marina is huge.  With over 2,000 boats it is the largest marina in the Southern Hemisphere.

Right now, dockside, it is a huge construction site. They seem to be updating the boardwalks and entry gates to the pontoons for when New Zealand hosts the 36th Americas Cup. 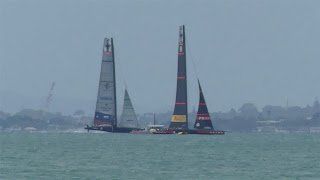 While anchored in Putiki Bay, Waiheke Island we saw two of the Americas Cup yachts training. They aren't yachts as we know them and have things like 'foils' that lift them above the water.

I did wonder if they are out yesterday because it really is blowing a gale and I can prove it. :) 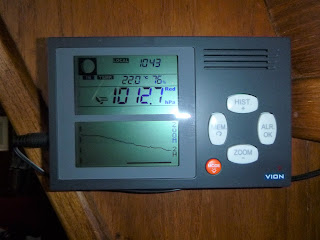 This is our electronic barometer.  One of its useful facilities is to beep until acknowledged when the pressure has dropped fast enough to indicate a gale in the next few hours.  Just in case you need an extra reminder, there is the image of a sailboat being blasted by gale force winds.

Weather reporting is quite good here and it needs to be as things change very quickly. One of the apps we use is called MetService and it's very comprehensive. 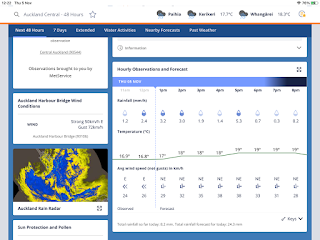 Another safety feature we have is our Anchor Alarm, which is part of our AIS (Automatic Information System).  AIS is used to keep track of marine traffic (and even the odd low flying helicopter) in our vacinity.  We also use it to let us know if we 'drag' when at anchor.

Whenever we drop the anchor, we 'Set' the anchor's location in AIS and let out the amount of anchor chain needed for the depth of water and conditions. 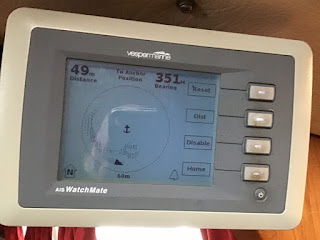 All the little dots you see are where Larus has been since the anchor watch was set.  We move around the anchor because of changes to wind and current.  It earned its keep recently as we dragged (the anchor moved from where we had put it) and let us know with an alarm.  Sometimes we get an alarm because the chain is just straightening out or the anchor wasn't on the bottom (it is hard to tell) and we were still drifting when Tim hit the 'Set' so the anchor position isn't exactly where the anchor actually is.

It was a odd situation because we shouldn't have dragged at all. The wind was light, there was little current, but we did seem to have moved a couple meters when looking at the yachts near us.  Rather than re-anchor, we opted to let out more chain and that was the last we heard from the alarm. 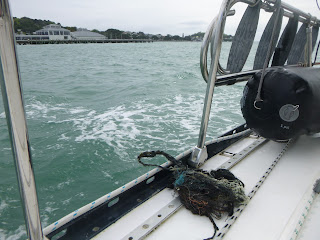 When we did finally haul up the anchor to leave, Tim found this knot of rope and net fouling the anchor. So no blame to our Rocna anchor.  We do love the New Zealand made Rocna that we bought here about a year ago, but not quite as much as our Spade anchor, which stowed on our bow roller perfectly.

We have been an number of place before leaving the Whangarei area.  We spent time in McLeod Bay and, an old favourite, Urquhart's Bay.

In Urquhart's Bay we met up with Shirley on Speedwell of Hong Kong. 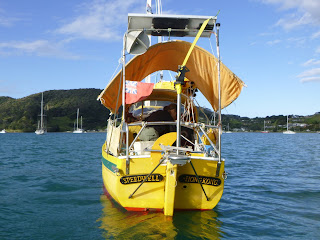 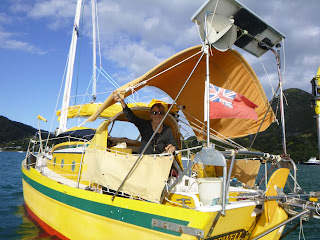 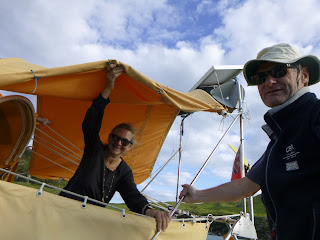 We met Shirley in Trinidad several years ago.  She is a sailor's sailor and sails for the love of it, which is just as well as 26" Speedwell of Hong Kong, with her junk rig, averages about 3 knots. She was once given up as lost but arrived after 3 months at sea. Kudos, Shirley.

We called in on Shirley to see if she wanted to walk the Smuggler's Bay Loop Track. 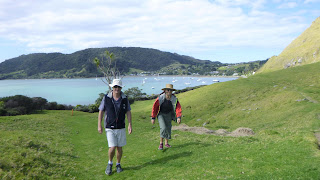 She did. The walk takes you out around one side of the headland via Smugglers Bay and then down to the bay through rolling pastures. 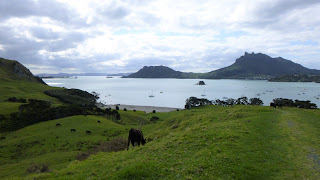 You can see lots of young cows, then Larus, the first boat from the beach, and behind her is Speedwell. 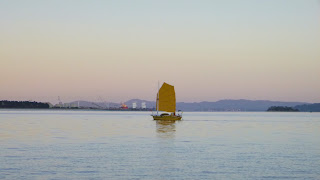 Early the next day, Shirley headed for Great Barrier Island.

We followed Shirley to Great Barrier Island a few day later. The forecast had better wind and we suspected that Shirley might have taken over 24 hours to do the short day sail.

We headed back up the river for a days car hire. Once the important stuff was done we went for a drive.  I thought I could navigate us up the east coast without a map to a little sea island village. Laura and I had the best chips/fries both regular potato and kumara/sweet potatoes.  It turns out I couldn't, but we did find Pataua. We had a walk along the sea side beach, which carried on into the bay and made for a sheltered beach front. 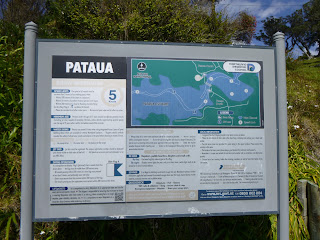 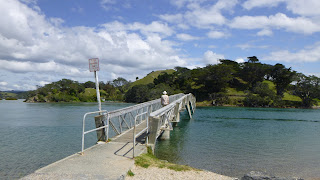 The current rushing in under the foot bridge was quite unexpected as the tide was supposed to be going out. That's still main land on the far side but it would be quite a long drive to get to the roads, houses and baches there. 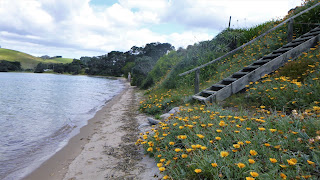 Inside the bay with Tim in the far distance.

A panaroma of the bay.  It's quite swallow with many sand bars exposed at low water. 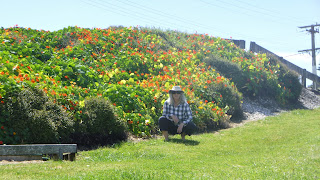 A glorious display of nasturtsiums.

From McLeods Bay, Tim did the Mount Manaia walk.

The view was spectacular though. Larus is anchored in the bay under cloud. The view looking to the top of Mount Manaia was equally impressive.

We have now visited Great Barrier Island twice and it always seems a little rushed and I have few photos of any note. It is a lovely island of lots of anchorages and walks. 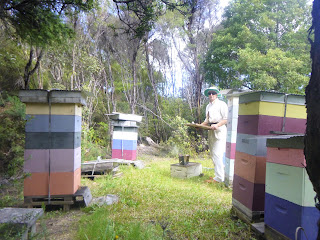 Most memorable for me was stopping to talk to a hobbyist bee keeper. He was a South African who had lived many years in NZ.  We talked about the effect of last years drought on the bees - bees were unable to produce enough honey to support them through the winter.  Their bee management needs some looking at as anyone can move, say, 300 hives into an area whether or not there are the plants to support them. Great Barrier Island is pretty remote so he might be safe for a while.  I also learned that there are manuka and kanuka trees which have different sizes blossoms, flower at different times, and one has a rough and flaky bark. 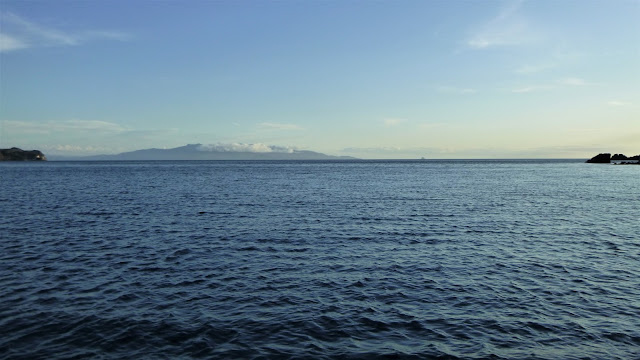 This photo is looking out of the last anchorage on Great Barrier Island toward the Cormandel Penninsula.  The Maori name for New Zealand is Aotearoa. The most popular translation usually given is 'long white cloud' and its easy to see why. They are everywhere. 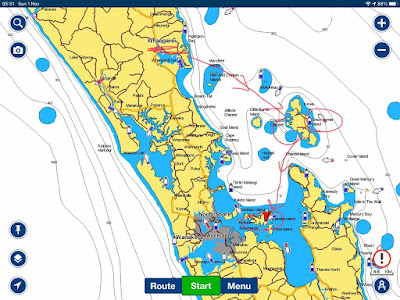 This was our route down to Waiheke Island where we visited with friends for Tim's from his Iluka days. It was just a short hop from there to Auckland.
Back in Auckland, today unlike yesterday when I started this blog, it has been dry and mild and we took advantage of that to check out the chandleries, see some sights and get a bit of shopping in.
And we did it on electric scooters and bicycles.  You download an app to your phone which shows you were the nearest scooter/bike is.  You scan the bar code on it and you have half an hour to use that particular scooter, as the idea is that it is used for short trips. You log off your scooter you get there and log on to a new scooter or bike when you are ready to go again.  It's a pretty good idea but i wasn't hugely confident on the scooter so switched to a bike for subsequent trips, despite the seats being viciously painful to sit on.  That might be so people just use them for short trips. I felt like I'd been riding all day after just a couple minutes. 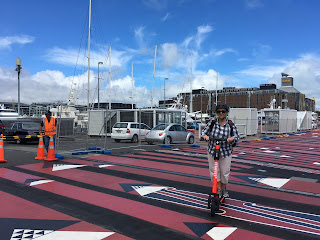 This was my first and last scooter ride. I just could not relax. I love the Maori design of the pedestrian/scooter/bike area near the city docks. 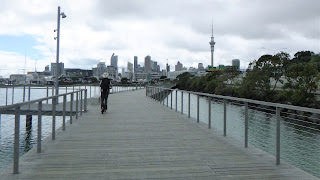 Tim scooting quite happily on the boardwork from the marina towards the city centre. 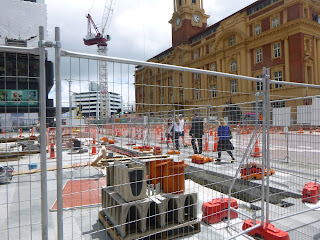 Almost all of central Auckland and the docks were under construction. 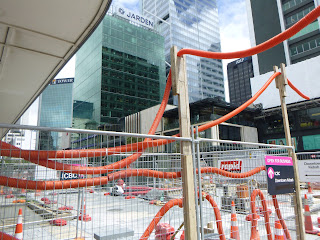 Today is the 6th of November and the 17th of Dec seems awfully close.  I wish them the best of luck to complete the construction work in time.  It will be spectacular, I'm sure.

Tomorrow morning we are heading our very early to start back up to Whangarei as we have packages to pick up and more shopping to do.  Shopping up north is much more reasonable!