Whakarewarewa - The Living Maori Village and The Waitangi Treaty Grounds

We visited a number of Maori cultural attractions and the first was a guided tour around the Whakarewarewa - The Living Maori Village in Rotorua. 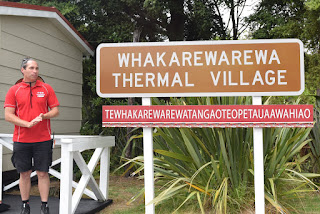 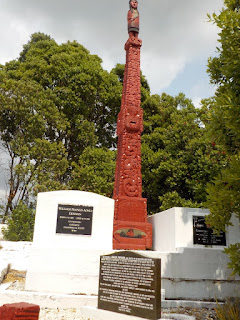 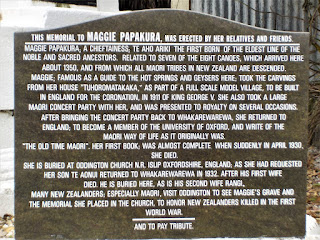 Whakarewarewa is the short version of the name you see written below.  Te Whakareware O Te Ope Taua A Wahiao means 'The gathering place for the war parties of Wahiao.'  It is often abbreviated by to 'Whaka' by the locals.  Our guide had no trouble with the pronunciation of any form of the name as he belongs to one of the iwi (tribes) who share the village and its resources.

The local tribes have grown tolarge to be housed in the village, and some now live in nearby towns.  All are welcome to make use of the hot springs. 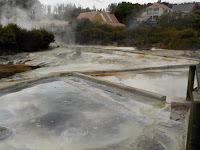 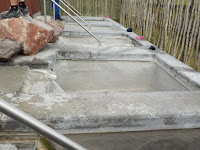 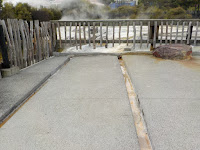 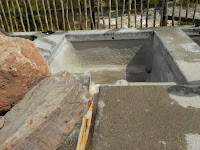 Cooking with thermal steam; The thermal waters are dammed and re-directed to cooking pits or the communal bathes; A row of baths which are closed for cleaning; Trough bringing hot water to the bath; The end of the tough at the bath. 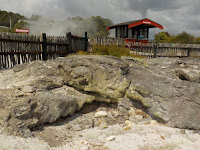 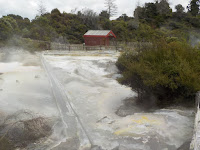 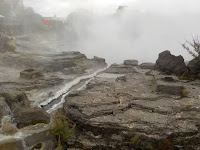 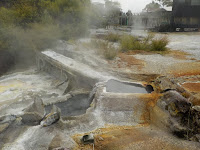 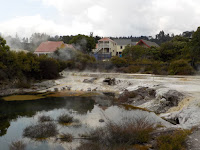 Where to buy your seamed sweetcorn - behind the sulphurous rocks; Steaming pools with a shoreline crusted with minerals;   A groove in the rock directing the flow of water; And people really do live here. The thermal springs often flow out of sight underground, their paths can change and create new openings to the surface, causing areas to be closed. 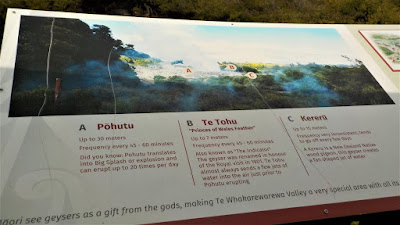 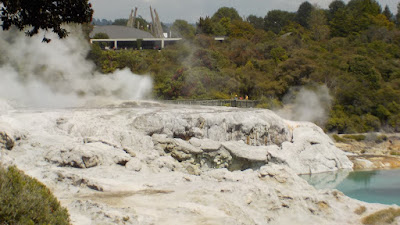 As well as the springs, this area also has geyers. Three in particular are regularly active;  You can just see possibly Te Tohu erupting. 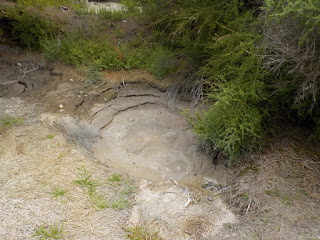 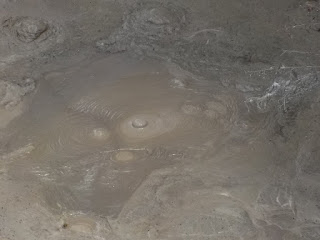 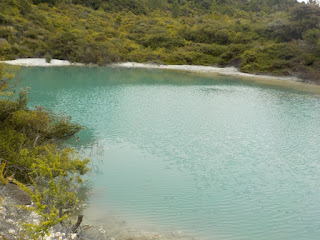 Down hill from the village were walkways around bubbling pools of mud and unexpectedly clear(ish) lakes of turquoise water.

The highlight of the visit was the cultural experience at the Ancestral Meeting House.

We were greeted with a welcome dance, Poi spinning, a Haka and authentic Maori expressions.  It was a wonderful theatrical performance and really very special.

My sister, Laura, and I more recently visited the Waitangi Treaty Grounds near Paihia only a couple hours drive from Whangarei. The performance was very similar to the Whakarewarewa performance, but there was one addition that we particularly enjoyed.

First a male volunteer was chosen to be the chief of the visitors - Waitangi Maori Experience Part 1 (video).  Next a young warrior approached our 'chief' with a with a spear and a small leafy branch.  He was really fierce, thrusting at our chief with his spear and demanding to know whether he was coming in war or peace, all in Maori of course.  Then he dropped the branch on to the ground and backed away, keeping low with the spear poised.  With a little encouragement our chief walk forward, picked up the token of peace. It was very impressive so of course the video failed.  But I do have our welcome into the Meeting House -  Waitangi Maori Experience Part 3.  Its a little wobbly at first as I have not mastered videoing and walking at the same time but it rallies at the end. 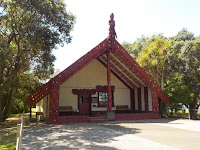 We often saw road signs for local Marae as we drove along the highways. We have never stopped to look as there because I don't fully understand what it means to the Maori.

At one museum there was a small stone bowl filled with water to dip your fingers in to wash the holiness off as you left.

Not knowing why this was done, I found this I site and am now much the wiser -  Washing Hands.

Inside the Meeting House we were forbidden to take videos but photos without flash were okay. It was dark inside but I think the blurring gives a sense of the movement going on. 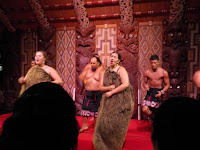 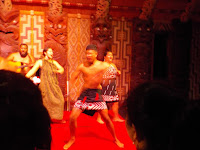 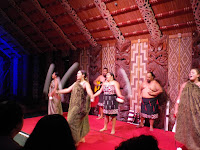 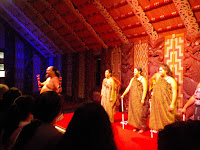 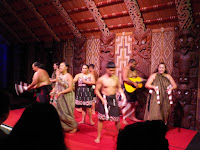 The first two photos - singing and dancing. Third photo 'Poi' spinning made to look easy.  I once had homemade poi made from tennis balls and tights.  It is not easy. Fourth photo - the brandishing of the short sticks.  Final photo - group juggling.  It really was amazing to watch.  The sticks are thrown from both hand in opposite/different directions and caught without anyone appearing to be watching where they are throwing or from where they are catching. 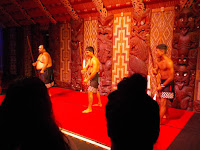 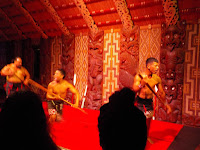 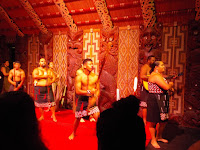 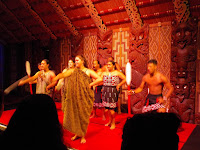 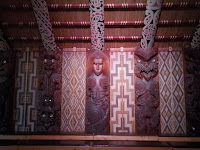 The first three photos - a display of spear handling, then the closing dance and song and one example of the many carvings that decorated the walls and ceiling.

And finally, if you are not a Rugby fan you might not have seen the New Zealand team, the All Blacks, perform a Haka - a ceremonial dance or challenge in Māori culture. It is a posture dance performed by a group, with vigorous movements and stamping of the feet with rhythmically shouted accompaniment. (Wikipedia)

Do watch for the fluttering of the hands in the video.  All dance involves this movement and we have been told that it is to show life and energy.  Enjoy!