Today, Tuesday the 21th of February, Tim, myself and our 3 line handlers will be transiting the Panama Canal into the Pacific.

You can try to follow our progress on the found here -  Panama Canal Webcams.  I say 'try' as they aren't very reliable. We have a transit time of 1400 to be at the anchorage to pick up the 'advisor' who travels with us through all six locks, three today and three tomorrow.  We pickup a mooring in Gatun Lake for the night.

We have been in Shelter Bay Marina, Panama for just over a week after a two day visit to the Chagres River, which you will hear more about once we're into the Pacific.  Tim line handled for a boat transiting the canal over the weekend and Monday we hired a car and drove to Panama City so Tim would visit a dentist for a broken tooth.

We have been hauled out for one night to replace the bolts that hold on the SSB Radio ground plate.  Due to electrolysis, one nut of the two bolts that hold the ground plate on had sheared off.  It was an expensive job - $500 US to be lifted out and then back in, and an additional charge of $15 dollars for staying onboard over night.  That last one is a bit cheeky - but it was well worth it as while they were pressure washing hull, the ground plate fell off.  Another set of bolts next to the hull would have stopped this from becoming a disaster, if the plate had fallen off while we were still in the water, but it would have been difficult, time consuming and expensive to replace the ground plate it self.

I could post photo after photo of this type of island view, but though they are beautiful it's the Guna people who make these islands so special.  We anchored near the closest island, which was uninhabited but used by a family during the day. They would most likely have paddled from the largest island in the distance. 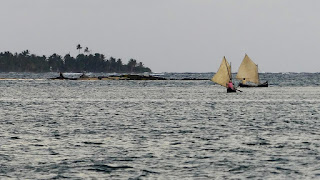 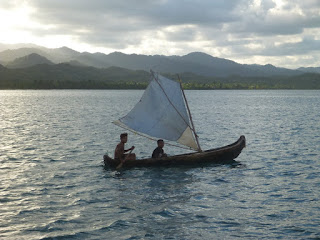 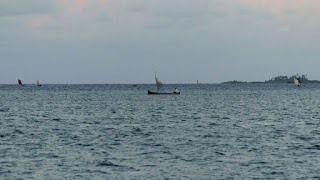 The morning commute by ulu; Two boys in an ulu; heading home.  The ulu is the Guna's traditional mode of transportation.  They travel long distances in every sort of sea state.  They fish from them, race them and are bailing them constantly.

We visited the island of and were given a guided tour of the local village. 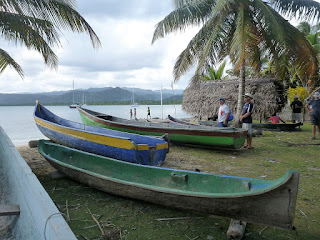 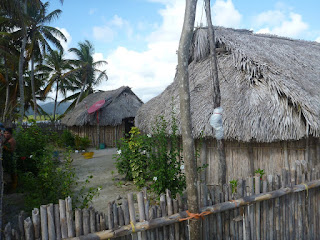 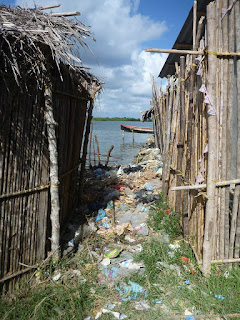 Tim and Dave and the village ulus - dugout canoes.  Although in many ways the people of the tiny island ofTaboga live their traditional way of live, 'progress' has been creeping in.  Colombia, to whom the Guna export coconuts, has paid for the islands to have satellite dishes installed. Another sign of progress, is the rubbish - most of it some form of plastic - that started arriving on their windward shores over 20 years ago.   This is a huge problem that no one seems to be addressing and there is no way the Guna have the resources to deal with it.

The people on our rally often organise rubbish collection from beaches, but once collected what happens to it?  We were never be sure how it was disposed of.  The only thing recycled for sure are aluminum cans.  Along with coconuts, Colombia buys their aluminum.

This is a 2015 video but it gives you of what the Kuna are up against.

Land of the Kuna People in danger from climate change and pollution. 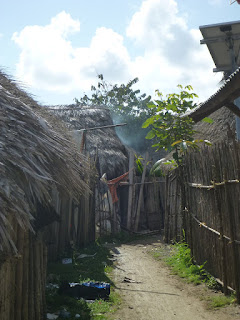 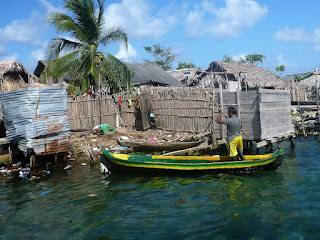 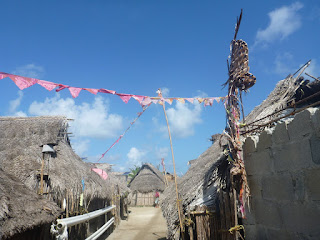 The Guna/Kuna/Cuna (same people different spelling) islands are packed solidly with buildings, including homes, shops, some industrial and the huge Congresso meeting place. There is a labyrinth of streets and it was interesting to see the smoke from a cooking fire drifting out of the thatched roof.  The islanders 'facilities'.  There is little plumbing on the island and the woven walled stilted cubicles over the water are the toilets.  There are decorations everywhere.  The banners are made of a single long piece of cloth (I looked) with a triangle pattern on one side and the straight side rolls up naturally to form that back bone.  Clever, I thought, but was in no way surprised as the Guna women are master seamstresses as well as leaders in their matriarchal society.

Back on Larus, we were treated to a visit by an extended Kuna family coming to show us and hopefully sell us their mola.

Photos of Molas.  I like the vintage ones best, but it is hard to find that type to buy.

Once back on Larus, we had some visitors. 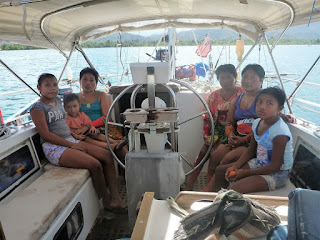 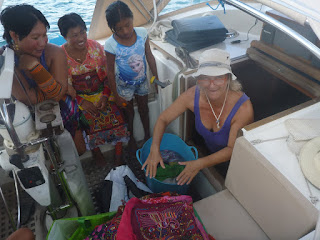 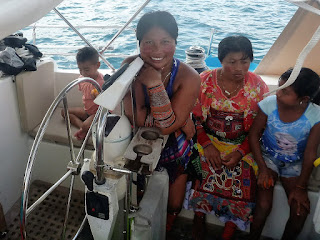 An extended Guna family - men, women, girls and boys - arrived in a panga (ulu with a motor) at the side of the boat. I was in the mid laundry and we were both bemused when the women and children climbed into the cockpit and made themselves comfortable.  They looked quite serious to begin with, but they were quite bemused by my trying to hide the laundry. And what a smile!

They had come to sell us their molas and there were a stack of them for me to look through.  You can see some of the mola in the foreground of the second photo and the lady in the middle is wearing the traditional dress.  Her blouse has a mola front and a matching one on the back.  The beads on the forearms and legs are worn by married women.

If you are not on deck when they paddle up silently there ulu canoes, they make singsong calls to lure you on deck.  I looked through all the mola they had bought.  There were all sorts of designs, lots of birds, fish and other animals like crocodiles and elephants even as well as objects, geometric designs and scenes. Every single mola is looked at and it takes quite a while, but I loved looking at them.  You cant help but marvel at the skill and imagination used in the designs.  During our travels through the islands we were shown many mola some with traditional designs and some more commercial showing Nativity scenes and even one with a Disney character. 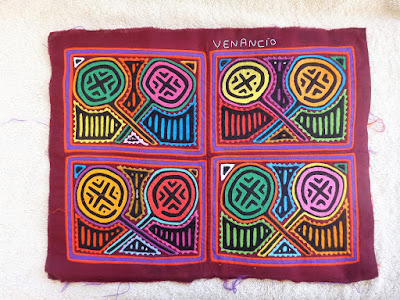 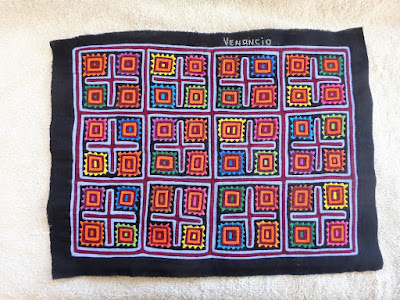 These are the mola that I bought later. The first is of maracas and the second is geometric. I bought them from a gentleman called Venancio, in the Coco Banderas Island. The island is share among the Guna and families will come to live on it for a period of time and earn money from the tourist.  I don't think Venancio maked them himself, there were well over 50 carried in large plastic buckets.

Venancio only sold mola of traditional colour and design.

All the mola are beautifully made and the stitches so tiny as to be almost invisible.  It takes over two weeks to make the two matching mola that are used for a blouse, one front and on back.  Pretty light weight fabric is used for the rest of the blouse.  They are so colour and many women still wear them daily with a sarong type skirt of brightly patterned cotton fabric.

During our tour of the village, I saw mola which might have been for practice or just for the home.  They were simple angular geometric maze patterns with only two or three layers of cloth. There can be up to 7 layers which are cut to allow the colours below to show through.  They also use applique to fill every bit of fabric with colour and texture.  The ones I saw were hanging in a public space and with the sun shining through, and they just glowed.  Those were the ones I coveted but they were not for sale.

I have more to write about the San Blas/Guna Yala Islands but the wifi is not playing ball, so I will post now and get on the with preparation for the transit.  See you from the Pacific!
Posted by Yachtlarus at 10:02