Last of Colombia and onward to the San Blas or Guna Yala Islands, Panama

New Years Eve in Cartagena really surprised us. The city centre changed completely. Every open space was filled with tables and chairs, which were either private of could be hired for the evening.  Food and drink was either bought or brought from home. 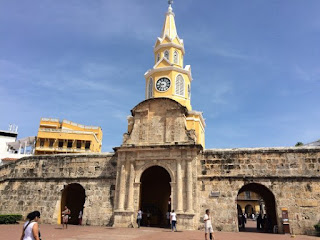 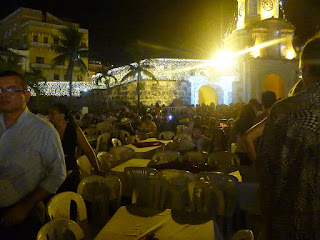 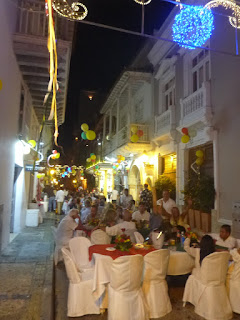 The first photo was pinched from the internet to show you what the area outside the old city walls on a normal day and the second photo is of New Year's Eve.  The streets within the walls were full of tables and chairs that had spilled out of restaurants and cafes or were brought by shop owners from home to enjoy there New Years Eve in the street outside their shop.  As we passed, we could see the food laid out on tables inside the shop. 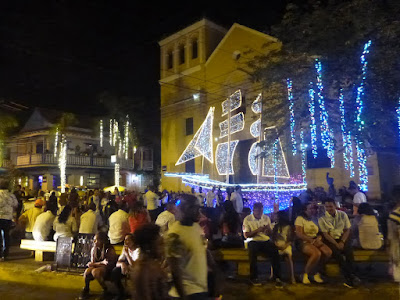 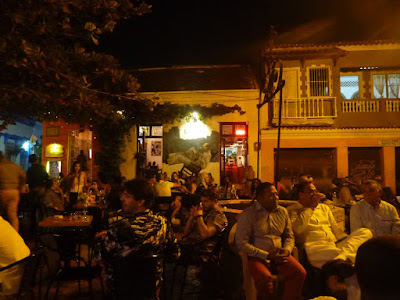 Outside the inner walls but still inside the outer walls is a historic area, Getsemani.  This area was where the least well off of walled city dwellers lived.  This is not saying they were poor; they were probably middle class if I understood our guide correctly from previous week.
Now it's the 'happening' place in Cartagena with arts and crafts, restaurants, bars and street vendors. Over the holiday period it covered in lights and full of people. 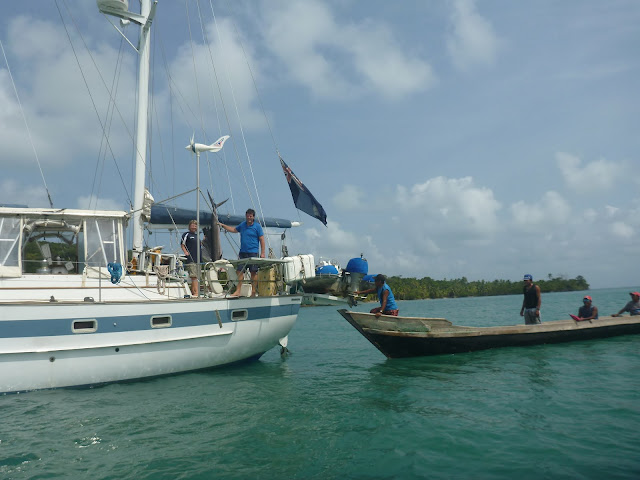 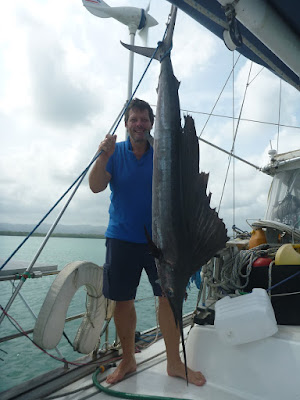 We arrived on the Isla Pinos on the 7th of January, after an overnight sail from the Colombian islands of Ilsa de Rosario.  On passage via the VHF radio we heard another rally boat, Lady Rebel, announce that they, Ken and Jenny, had caught a sail fish.  We had a line off the stern and quickly reeled it in.  We did NOT want to catch anything that big.  We anchored along side LR and weren't the only boat interested in the fish.  A boat carrying 4 of the Guna men came over to have a look as well.  They are great fishermen themselves but there boats are not suited for offshore work.  A great site for more info on the Guna, ulus is the Gula Yala article in SmallBoatsMonthly.

Not quite knowing how to deal with a fish this large another rally member suggested that Ken speak to the one an only island restaurant to see if they would cook the fish for us. Later that evening 20 cruisers and almost as many Guna men dined on sailfish complements of Lady Rebel.

I didn't get a photo of that dinner, but we dined at the same restaurant the next night. 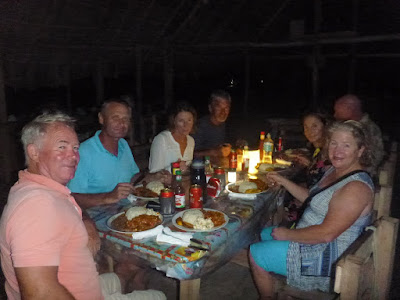 It was an interesting, in a good way, experience.

The food was good but if you wanted chicken you had to pre-order it but anything from the sea was always available.  We did notice that those having fish, had sailfish. I had octopus and it was served with a mound of rice, lentils with onions and fried green bananas and I enjoyed it just as much as the previous nights meal.

The restaurant was a large open walled building with a kitchen on the back and a steep roof of palm fronds, which apparently last up to 15 years.  There is no electricity except via generators so we brought lamps to dine by.

To Tim's left are Francis and Rob on Alia Vita, the couple in the foreground are Dave and Leanne on Perigee and in the back are Rick and Julie on Believe.

We explored the island with the Alia Vitas and the Perigees. 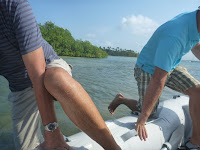 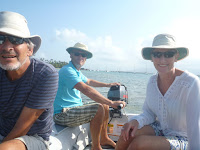 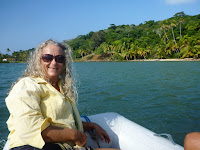 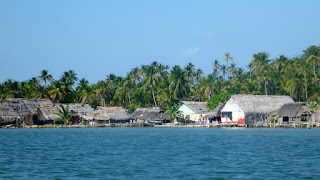 I love the action shot.  It looks quite dramatic, but it was just to get us over a shallow bit in a shortcut to the village.  Rob, Tim, Frances and me heading to the one village on the island, which is the traditional Guna Village. 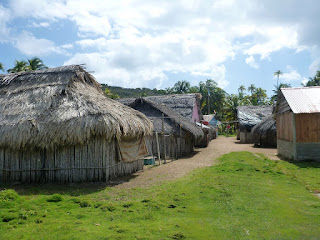 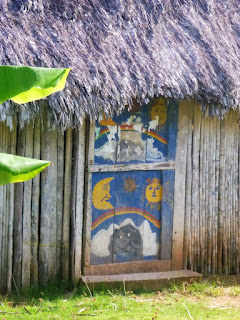 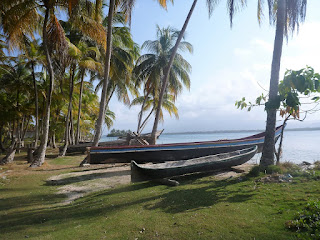 The palm roofs are said to last 15 years.  Boats: Pangas, large with engines and Ulu, smaller paddled or sailed dugout canoes. Really the island is that pretty. 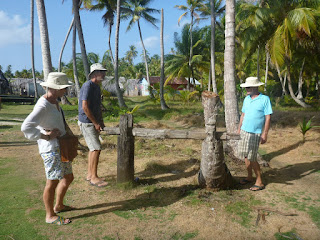 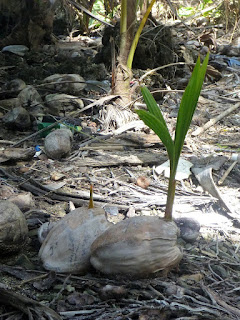 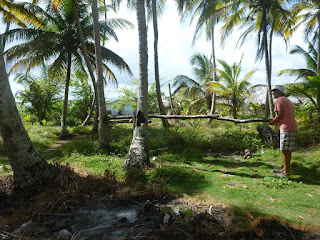 A tool that we are reasonably sure is used for husking coconuts.  Coconuts are an important export for the Guna and it is likely that the coconuts we bought in Colombia were supplied from the San Blas Islands.  We were always careful not to walk under coconut trees after hearing the first very substantial 'thud' when a coconut hit the ground. The wood used around the island for building the floor and chairs of the restaurant as well as wooden bar of the coconut husker ia really fine grained and very heavy. 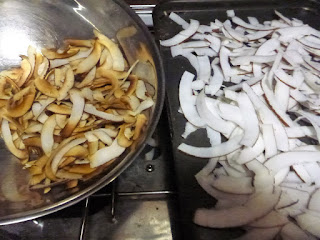 And here is one of the things that I do with fresh coconut.  Once the meat has been carefully pried/chipped from the shell, I make long ribbons with a carrot peeler and then toast the strips under the grill and season with salt and pepper.  I first saw this used as a nibble with drinks at the Firefly Restaurant on the island of Mustique in the Grenadines. It also makes a nice garnish for soups, salads and desserts. without the salt and pepper on the latter.

I've also had the strips of salted fresh coconut when visiting other yachts. It is very nice as well. but doesn't have the longevity of the toasted coconut.  Grated fresh coconut an be frozen and saved for sweet and savoury cooking and baking. 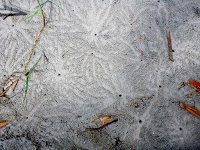 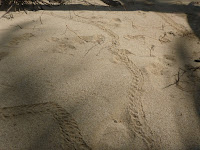 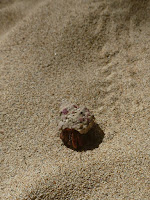 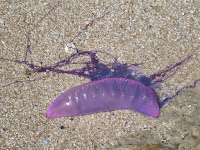 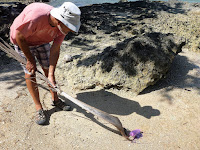 Strange but lovely designs left by whatever was hiding in those holes; Lizard tracks perhaps?; Nope, the second set of tracks was made by a small red crab hiding in its shell. The pink bladder and purple tentacles are of the Portuguese Man of War Jellyfish.  The tentacles will give you a nasty sting which is why Rob is trying to move it back into the water with a palm frond.  Portuguese Man of Wars drift along like most jellyfish but they have an inflatable sail which will make them drift along more quickly.  Washed up on the beach, this one was doomed despite (or perhaps because of) Rob's best efforts.

We were very pleased with our first taste of San Blas Islands, and that was just one of hundreds that we might well have visited. 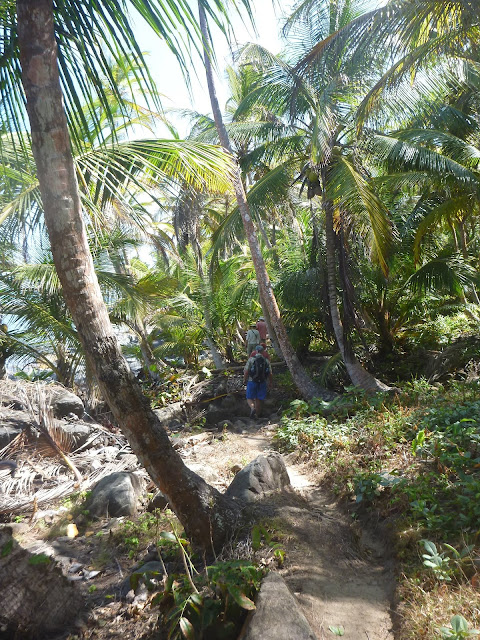