Greetings All!
Tim and I are now both back on Larus and in the water.  We have finally moved on from Trinidad and arrived in Prickly Bay, Grenada on Thursday the 25th of October.  We had a wonderful first sail - light winds, flat sea, and a full moon - after being out of the water for nearly 5 months. We also caught and passed another sailing yacht that had had a 5 mile head start.  Very satisfying. :)
While in Trinidad, Tim orchestrated a huge amount of work on Larus. I have helped of course, but the lion’s share of the boat and system upgrades and maintenance will always be down to Tim.
Just to put you in the picture, here is a list of the big items that have been accomplished:

The new sprayhood is a great success but there were a few surprises.  We had looked at getting the sprayhood replaced in a number of places and it was always going to be expensive, but Avell at Grenadine Sails, Bequia was a little less so. 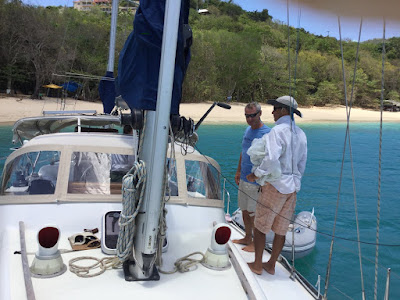 We were impressed by Avell's appreciate of quality of our old sprayhood which had been made in the UK by guy in Southampton.  Tm can't remember the gentleman's name now, (it was a long time ago), but when he came to make the paper templates, it was such a windy day that he had to resort to 'doing it the old-fashioned way' by taking the measurements by hand.  A good sprayhood is tight as a drum.  All the fabric and plastic windows should be smooth and ours was, although the fabric leaked like a sieve due to age and sun damage.


Avell mentioned wistfully that he wished that he could have learned from the UK cover maker as the quality was obvious. When he asked to take the sprayhood away and use it as a template, we were more than happy to accommodate him.

We specified the colour we wanted, silver grey, to match the bimini (cockpit sunshade) and asked him to make up an additional piece that zipped between the two to keep the cockpit drier in wet weather and heavy seas.  Certain points of sail can result in a wave catching the bow just so, with the resulting spray leaping over the sprayhood and drenching the person on the leeward side of the cockpit. You might have gotten wet anywhere in the cockpit but sitting on the leeward side was special.

The first thing we noticed when the new cover arrived was that it wasn't silver grey, it was 'linen', and there was not a lot that we could do about it. Avell had told us that he had the silver grey in stock. I've spent a lot of time thinking about how we ended up with a 'linen' cockpit cover, because it was a big risk for Avell. We could have said, this is not good enough, take it away and do it again, but we didn't for a number of reasons.  The sprayhood fit really well after a little tweaking by Avell, the additional piece we ordered was exactly what we wanted, he might not have had the right colour and no way of getting in in a reasonable time and it would have been a financial disaster for Avell's small business.  We actually prefer the new colour and have cockpit cushions made in the same colour here in Trinidad, by Kay Upholstery, a two sister team who did a very good job. 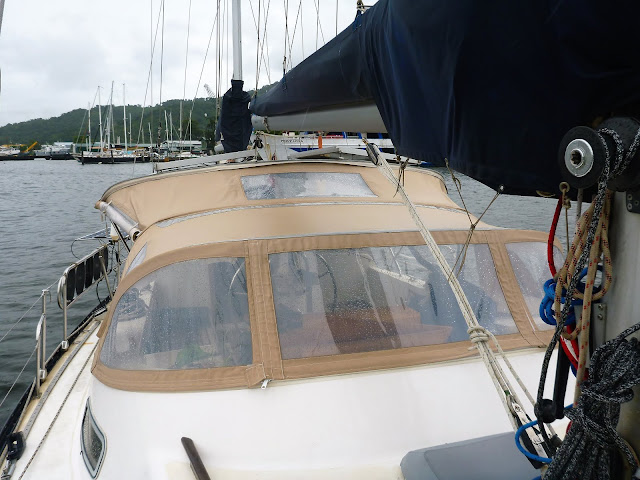 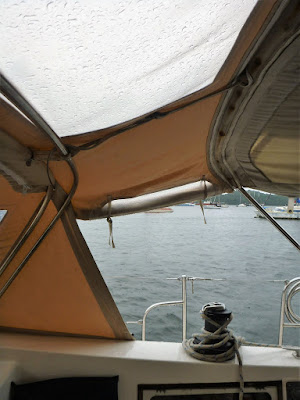 And here they are, doing a great job of keeping us and the cockpit dry as a tropical wave passes over Trinidad.  There are a few things that I would like to change.  The side panels that are rolled up in the new section that zips in (and out) between the sprayhood and the bimini are tied with some light webbing.  In a perfect world, I would replace them with parachute clips if I could find the in the right size and colour. You can get black clips by the bushel but the white ones are harder to find and much more expensive even on Amazon.  I have bought press studs in Canada but once down here, I found I'd have to replace the webbing with something a little wider and that is harder than it sounds.  I will just be patient and see what comes up.

Changing the standing rigging - the wires that hold up the mast - on the main and lifting out the engine were the two big jobs that the planning of had kept Tim awake at night.  Some of the pressure was taken off him by Jonas from …..Rigging who we contracted to replace the standing rigging.  This meant that Jonas hired the crane and did all the work lifting off, replacing the wire rigging and then putting it all back together again. 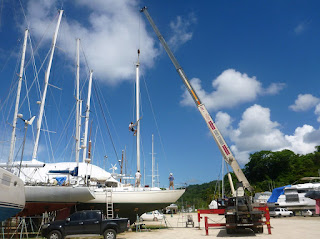 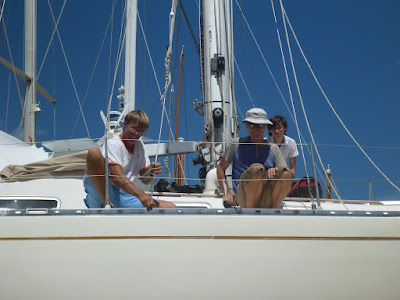 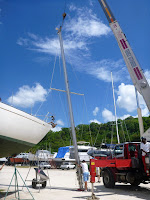 On the same day, we also made use of the crane (and all the extra hands) to lift out the engine so that Tim could change the timing belt.  This was a job that had been earmarked for last August in Deltaville, Virginia, but despite completing numerous work orders, the yard never got around to it. 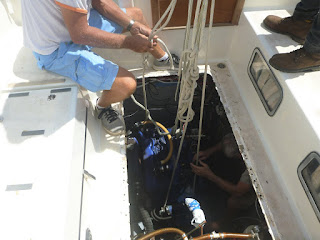 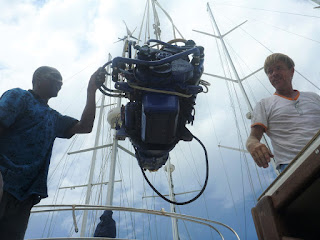 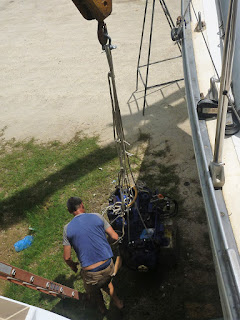 Lifting out the engine took a lot of preparation.  First the cockpit floor and steering pedestal had to be removed.  Then the generator which sits aft of the engine was then removed and the engine detached from the engine mounts, which keep the engine in place and have shock absorbers to reduce the noise and vibration when the engine is running.  The trickiest part, and where we sorely missed the expertise of our friend Paul in Southampton, was arranging the ropes that would be used to lift the engine so that the engine came out level.  'Level' is important because the engine only just goes through the opening in the cockpit floor and if the engine is tilted at all from port to starboard it will catch on the sides of the opening and that would be bad.  It also needs to be level fore and aft so that the engine will lift cleanly off the 4 vertical bolts on the 4 engine mounts. 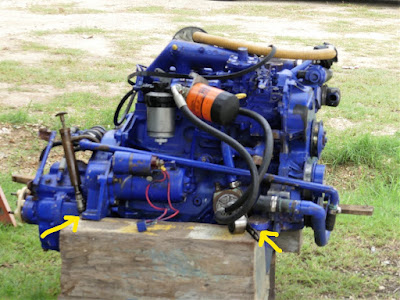 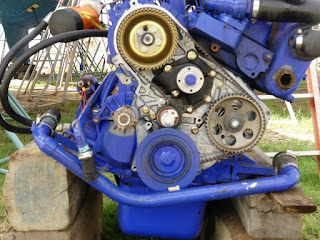 You don't often get a chance to have to all of the engine within reach and Tim took the opportunity to give it a good clean and change the timing belt, which would have been completely impossible into the boat, but as easy as taking the old one off and putting the new one on.

Once the rigging was ready to go back up, the engine was craned back in and Jonas got the mast and rigging back in place.

Another big job that Tim accomplished on his own was installing the new lithium ion battery as well as the management system that controls and monitors all aspects of charging and discharging. 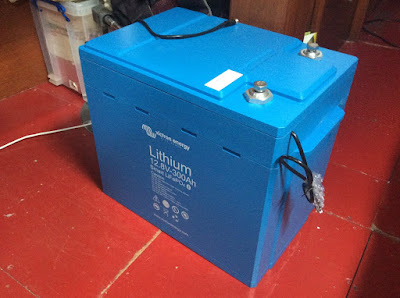 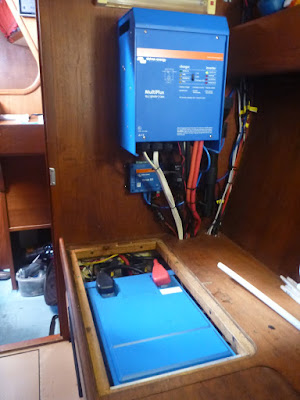 I will leave it to Tim to tell you how it is working out for us.

The new battery gives us higher power usage, which has added another option than propane of cooking.  More about that and a tour of our refurbished galley and tools in the next blog.