Barbuda took a direct hit from Hurricane Irma in 2017.  Tim and I spent a number of weeks on charter there in early 2018 and this is what we found.

There was a lot of concern that following the destruction of hurricane Irma, the frigate birds might not have returned to Barbuda. Tim and I took a dinghy ride around the north coast of the island to go and see for ourselves.  From a long what off you, could see hundreds of them riding the air currents over the mangroves. From what we could see, the frigate colony birds seem to have recovered far better than the human habitation on the rest of the island. 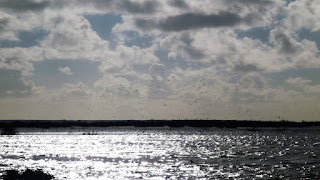 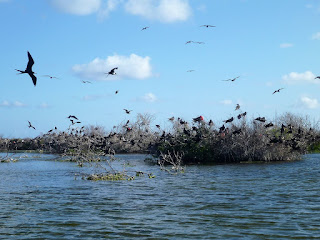 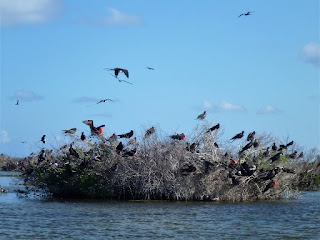 Pre Hurricane Irma the lagoon used to be a body of water open only from the sea on the northern side of the island via mangroves and the frigate bird colony. 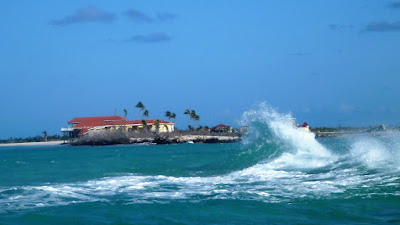 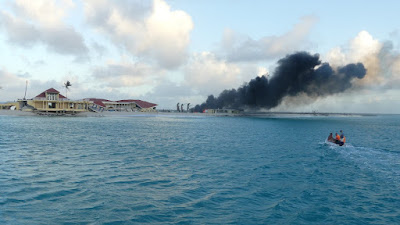 Post Irma, the strip of sand, formerly Barbuda's 13 mile pink sand beach, was breached in two places.  The current coming out through the largest gap is about 2 knots and the standing wave you see is caused by swell passing over a shallow point as it heads into the bay against the current and wind.  We took the photo from the dinghy in the relative calm of the now currently navigable channel. The breach has made the Lighthouse Resort accessible only by boat.

So when workmen using a blow torch accidently set fire to a building to the right of the resort, it was a matter of getting people from Codrington on the far side of the lagoon by boat to fight the fire.  We got a call from Devon, our guest's water taxi driver who we used, when it was too rough for Tim to take them through the cut into Codrington, asking, 'what's burning?'  The plume of smoke would have been visible from much of 'flat as a pancake' Barbuda.  Tim and our guests went ashore and helped to extinguish the fire with a garden hose and buckets of saltwater before it could damage nearby plant and equipment. 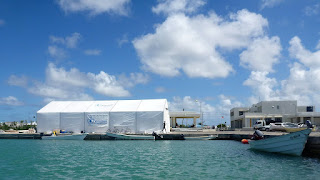 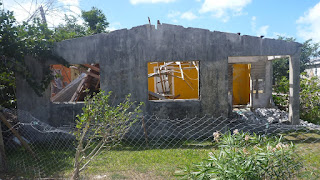 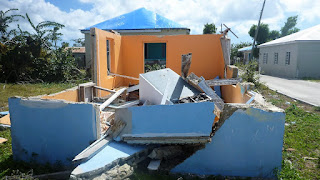 The World Food Program in Codrington, which supplies the basic necessities to the 200 or so of the Barbudans currently living on the island.  It is a strange state of affairs.  While we were in Barbuda, the seas between were up and the ferry was not able to make its regular deliveries to Barbuda from Antigua.  This resulted in gas and diesel rationing.  Not only where fishing boats unable to go out, but cars were parked and bicycles used instead.  Just behind the white tarp building is the Fisheries building.  If you click on the photo you can see a person sitting at a table. This is where the people of Codrington charge their phones.  They don't have electricity, unless they have access to a generator, or running water, but depending who you were speak to, this is not so different from pre-Hurricane Irma.

The damage to the homes and buildings was a different story.  Months on people were still living in tents and getting supplies and fresh water from Aid agencies. 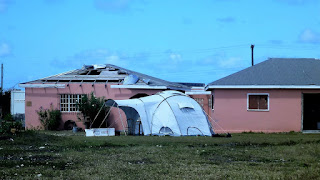 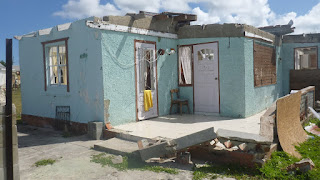 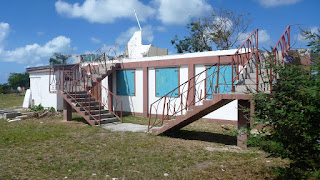 Cocoa Point was a high end resort on the southern most tip of Barbuda and is very exposed.  It would have been evacuated at the time of the hurricane. 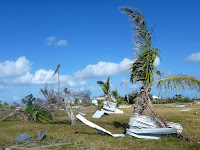 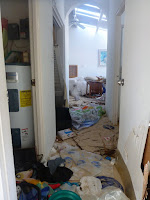 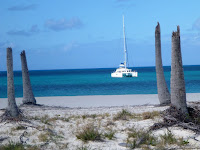 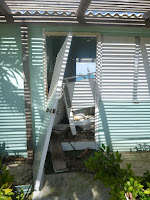 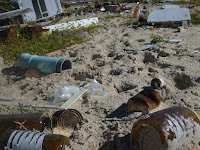 Palm trees wrapped in corrugated iron roofing; Inside on of the holiday units; palm trees with their tops snapped off - we didn't see that anywhere else on the island; Damaged but still standing buildings; Tinned and canned food were scattered across the sand, many intact but now badly sun damaged.

It really is hard to see how they will get Barbuda up and running again.  All the islands devastated by Hurricanes Irma or Maria will continue repairing and rebuilding, and hope that the next hurricane season is kinder.