Today is a very good day for doing things on board.  There is a low passing over Bermuda and we've got quite strong winds in the anchorage. We're snug as bugs and getting on with things below deck.

Tim is having another go at our immersion water heater. Yesterday he replaced the expansion tank (where excess water goes as it expands as it heats up) with a larger one.  The original one wasn't large enough, would get over pressured and leak which caused the pump to run continuously.  He also clean the filter from water tanks.  Various repairs to the baffles in the tanks (they slow the water as it sloshes around with the motion of the boat -they keep unsticking themselves) with underwater epoxy have left sediment in the tanks.  This sediment gets filtered out before it can get into anything important, but we hadn't done this one for a while and it was quite full.  Cleaned out the pump is suddenly very noisy and has been running a little randomly, making Tum suspect that something isn't behaving as it should. So he is crouched down in the engine room figuring it out, while I sit in the saloon with a nice cup of tea and write about it.  I'm liking this division of labour.

We are back in St George's after a short visit to Hamilton, the capital of Bermuda. 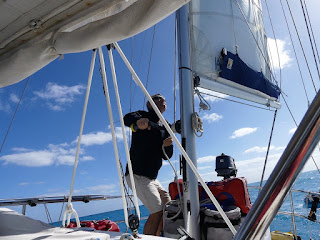 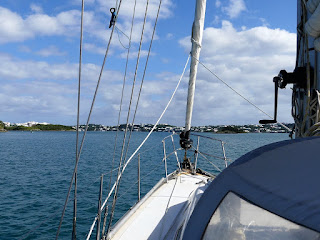 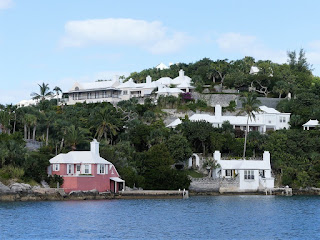 We managed a little sailing on the way there under mizzen and jib alone, and Tim is tightening the mizzen halyard underway.  Bermuda is very low-lying compared many of the Caribbean islands and has a very interesting geo - Bermuda Geology -  'Bermuda is a volcanic seamount located 1000 km off the east coast of the United States in that part of the Western Atlantic known as the Sargasso Sea. The island was created by a series of mid-ocean volcanic eruptions that began about 35 million years ago, at a time when the Atlantic Ocean was much narrower.'  (from the NOAA Ocean Explorer website).  Hamilton has a much grander flavour than St George's, the original capital. 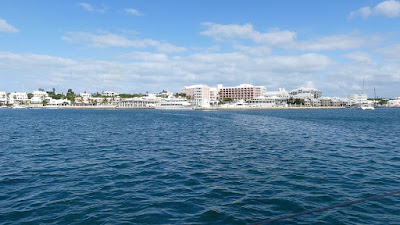 This waterfront view is very like other Caribbean and Mediterranean cities.  There is space for cruise ships and much of the buildings support the tourist trade.

We anchored behind a small island across directly across from Hamilton.  It was a short dinghy ride for us to go and have a look around.  We found a supermarket toward the back of the city and were excited by the selection available but subdued by the prices.  We bought the bare minimum of fresh produce, though now back in St George's, we find the prices in little shop here are around 25% higher things for like apples and oranges. 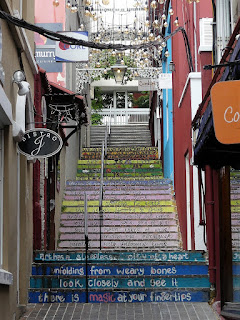 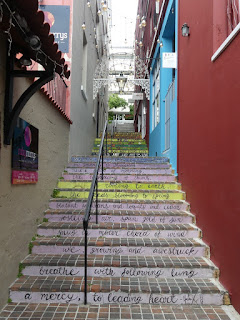 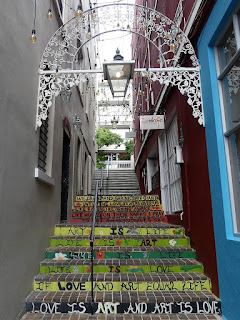 Hamilton didn't have the old world charm of St George's but amongst the shops were little gems like this wonderful lane.

It started out a dullish day and we decided to take the ferry to the National Museum of Bermuda.

The trip over gave us a nice view of the anchorage. Larus in the middle boat and the catamaran to the right of us is Baloo.  Baloo is home to Stephan and Serena for the next two years as they start their circumnavigation.  They are heading to Antigua as well and it will be their first time in the Caribbean. 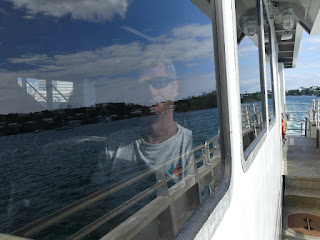 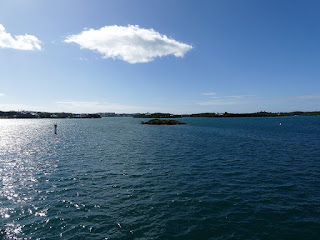 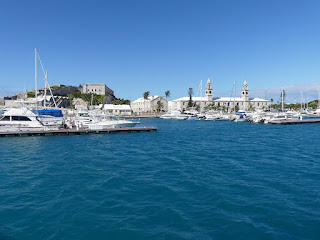 The ferry serves as an express bus service.  Bermuda is a great crescent of land and, though there are buses, travelling by boat is often quicker.  It also gives you a view of the reefs that are as much protection from the ocean as they are hazards to boating. The beautiful building with the two towers is a shopping mall, but we hadn't come to shop or eat $18 burgers! 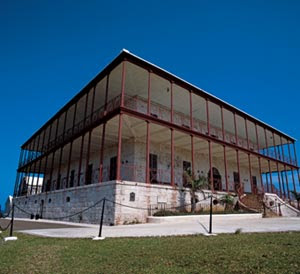 We came to visit the Commissioners House, which holds the National Museum of Bermuda.  (photo  from Bermuda-attractions.com as I didn't have one)

The Commissioners House is located in the Keep, the citadel of the Royal Naval Dockyard.  We purchased our tickets at the gate and were directed to go through the gate at the top of the ramp making sure to close it again to keep the sheep in.

The building is more beautiful up close than from a distance.  The views from the verandas are amazing, and I particularly liked the contrast for the stone, rust coloured railings and the brilliant blue water and sky. 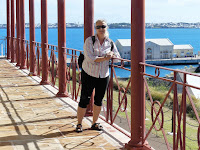 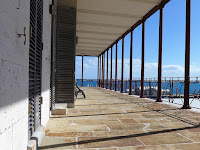 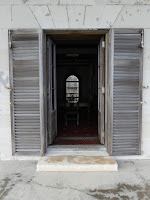 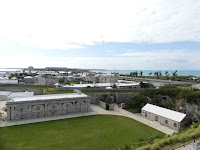 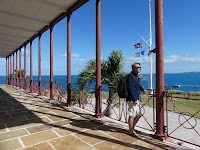 The Commissioner's House is one point of interest on the African Diaspora Heritage Trail Bermuda.
Bermuda's history of slavery covered a period of 200 years and starting in the 1600's when Bermuda was first colonised.

We've had little time for sightseeing as the weather for the last few days has been wet and windy.  So wet and windy that going ashore means getting absolutely soaked, in the dinghy ride either there or back. It's not getting rained on that's the problem, it's when you have to motor into the waves.  It really can be quite miserable.

There was a break in the weather yesterday and we took a bus to a good sized supermarket.  This was a excursion as most of our travel around the island has been by boat, and in a boat with all the reefs you stay well out to shore.  To go by road was a treat.  They wound around the island's islands which are joined by bridges of various ages and types.  The buildings are mainly painted in pastel or bright tropical colours.  Every once in a while we'd pass a small irregular field of warm brown freshly tilled earth.  I did wonder what they were going to plant.

The floral here is a mix of tropical and English garden.  There were banana and hibiscus trees and roses and geraniums.  With better weather I would have searched out more gardens and farms.  I bought local carrots, but little less that I wanted was grown on the island.  Many of the Caribbean islands are growing things like lettuce hydroponically. The only lettuce we found here was imported.

It really is an amazing island and we could have spent much more time exploring.

We're be going ashore shortly, one last time as we will be leaving Bermuda tomorrow.  We need to do a little last minute shopping and get rid of the rubbish.  We want to do it all today as we can deflate and stow the dinghy below deck.

Our destination is Antigua and depending on the wind, too little is more of an issue on this passage than too much, should take us between 7 and 10 days.

So, we'll catch up with you in Antigua!