Tuesday morning, we started early to get to Wiggly Piggly, the nearest supermarket for our last top up shop and for Tim to clear us out with Customs before casting off just after noon.

We had some help with our transportation.  A local decorator stopped us outside the supermarket as we were ordering an Uber car. He asked if we were sailors and did we want a lift to the marina.  Yes, please! And we got a little tour on our way there as well.  Once we got the groceries back on board, our fellow OOC members on SV Askari drove Tim to and from the Customs and Immigration. 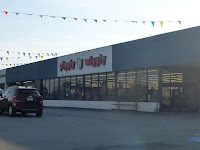 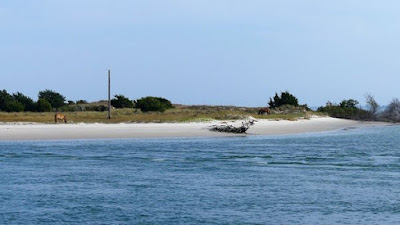 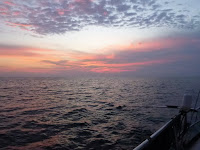 We cast off just before one o’clock, caught the one thirty bridge opening and headed out past Cape Lookout, which is famous for the wild horses which roam the beaches.  Then off we went out into the Atlantic.


Our weather forecast was for light winds from SW for a day or so and then several days of motoring.  We had a nice wind and a pleasant sail overnight.  We hadn’t done any long-distance sailing for a while and it was a nice gentle start. It takes a while to get used doing all the things you do everyday on a moving platform.  When we were chartering the crews used to use the phrase ‘charter fit.’  The first few charters are hard and exhausting.  Weeks on, though the work hasn’t changed, it just gets easier as you get stronger and more used to the work.  It’s the same thing with sailing.

Wednesday 08 Nov 2012
The wind dropped as expected on Wednesday and at around noon we switched on the engine.  Tim went down for a nap and I stayed on watch.  I noticed that we had a bit of an exhaust smell in the cockpit, but with a following wind and the engine running, that is expected.  It got stronger and I thought I could smell something more than just exhaust.  I went below to check the engine and found a smoky steam in the ally way coming out of the engine room.  I shot back outside and switched off the engine calling to Tim that we had a problem.


This meant that until the hole was repaired or water-lock replaced we could not use the engine.


Next Tim opened the sea water pump and found that impellor hand only one leg out six left. So this was the problem.  Impellors should last two years and this one had been replaced a year ago, but in retrospect we have done a lot more motor than we usually do, so that might have hurried this one’s demise.  Tim replaced the damaged impellor with a new one and started looking at the next problem – how to resolve the hole in the water-lock.


As luck would have it, we had a water-lock melt due to a closed seacock in Guadeloupe and with the help of our friend in the UK, John Hart, Tim by passed the water-lock with a length of exhaust hose and Tim had kept the plastic elbow that he’d use to join the two lengths of exhaust.  Hurrah.


Now we can use the engine as water will come in and water and exhaust will still go out while the engine is running, but once it’s stopped we must close the seacock in the engine room to stop sea water syphoning back into the engine.


With the sea cocked closed, we had to make sure we didn’t start the engine or would it overheat. To that end we removed the key every time we switched it off and removed it from the engine panel.


After a very long 3 hours, we were back in business.


We were a very perplexed as to why no alarm sounded when the engine started to overheat.  Checking the panel Tim found the wiring had become disconnected at some point.  He has also decided to install a water flow sensor on the inflow pipe so that as soon as the water stops flowing an alarm will sound giving us an additional warning.


While all this was going on, we were also thinking about options if we couldn’t use the engine.


We wouldn’t be able to get back across the Gulf Stream without ending up further north, and we’d be in very rough seas if the winds came around to the NW against the current as was expected in the next few days.


The most sensible course would have been for us to bypass Bermuda and head directly for Jolly Harbour, Antigua.  We had provisioned for a trip of potentially two weeks and you can sail into the Jolly Harbour anchorage without any trouble at all.


Since we'd resolved the problem however, we had a nice cup of tea and motored on towards Bermuda instead.


We knew from before leaving Beaufort that a cold front with fresh to strong winds would arrive late Friday evening and persist until Sunday.  We have been in similar conditions before and though we knew it wouldn’t be much fun, both ourselves and Larus were up to it. 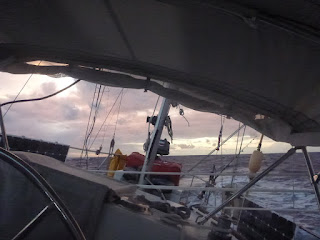 In anticipation of rougher seas, we stowed to a much higher level.  Anything on shelves or in cove lockers that could not be secured was stowed away.  For about 36 hours, from late Friday until we arrived at near midnight in St George Harbour, Bermuda, we were bashing through ten foot seas with 20 to 30 knot winds, suffering drenching squalls, all the while making good progress toward Bermuda on a close reach, and not a thing budged or escaped.

Tim also dropped the main sail completely and double reefed the mizzen before the wind picked up.  Our jib is a ‘blade’, which is small and efficient.  It can easily be furled in to reduce its size if necessary without leaving the cockpit.  With Larus prepared, we just watched and waited for the wind to swing around to the north west.


Happily, Bermuda and her surrounding waters benefits from the Gulf Stream and the water and air temperatures were surprisingly warm.  This was appreciated every time a wave hit the bow and foamed down the length of the boat.  The sprayhood keeps much of the water off us but you’re still going to get a little wet and every once in a while a lot wet.  Once again, we discovered leaks into the boat we never knew we had.  A lot of them, we think, were just caused by the sheer force of the water rushing over the deck.  We always wore our lifejackets with harnesses clipped on while we were in the cockpit.


It was tiring but never frightening, and if that had changed we could have turned and run before the wind or hove-to and let the front pass.  We weren’t anywhere near that point though, and opted for just getting it over and done with.

We did we some floral and fauna on our way to Bermuda.  The floral consisted of little clumps of the coarse Sargasso Sea Weed being deposited by waves and spray on the deck and occasionally in the cockpit.  It was funny to see the little tumble-sea weeds being blown around the bow.  They skittered around like little brown mice. 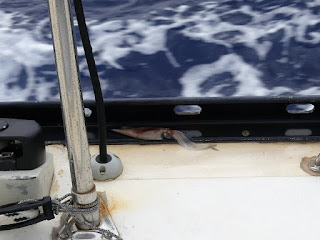 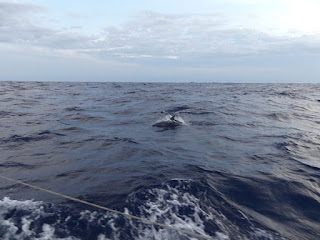 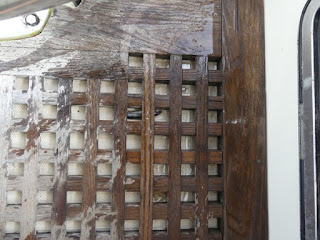 We're used to finding expired Flying Fish on deck in the morning, but we were surprised to find a little squid in the scupper.  We also had a pod of tiny dolphins target us and shoot out of the waves beside like little missiles.  They came up to us so fast and then slowed right down to keep along side us.  The last photo we took at anchor in St George Harbour.  We have no idea when this little guy came on board, but he must have surfed in on a wave.

The procedure for arriving in Bermuda starts 30 miles out when you notify Bermuda Radio that you are approaching.  You then call again at 20 miles and they very politely ask you loads of questions about the boat and about the equipment on board.  It also gives the Radio Operator the chance to say, ‘Bet you’ll be glad to get into our harbour’, and ‘Give me a call if there is anything I can do to help,’ and ‘She’s a good looking boat. I’ve just looked her up on Marine Traffic. Don’t leave without letting us get a picture of her.’  We also received instructions about how to enter the harbour with instructions to call them when we reached the first Cardinal Mark to have the instructions again.  Then there were more instructions about where to go to clear Customs and Immigration, which had to be done immediately on arrival.


After our first contact with Bermuda Radio, it was another 6 hours before we motored into the harbour and we were very glad to have arrived.  Customs and Immigration was just as professional, efficient  and helpful as Bermuda Radio and we were soon 'dropping the hook' and climbing into bed.

Chores, chores and more chores were what we've been up to over the last two days.

As well as the laundry and general cleaning and de-salting the interior, we had a number of more technical chores to work our way through.

We had a slide break on the sail for the mizzen so that has gone of to be repaired.  Part of the inflatable floor in the dinghy has a small leak that we will wait to repair just before we leave so the patch will have a good long time to cure.  We are also waiting for  the new water-lock for the exhaust to arrive from the UK, which Tim will install before we leave.

We did go ashore for an afternoon walk around St George on Monday and were astounded to see the price of diesel at the pumps was $1.85 a litre.  We've gotten used to paying .65 to .70 cents a litre in the US.  Tuesday we decanted our 4 jerry cans of reasonably priced diesel in the tank.  We're back up to 'full' having only used 80 litres of the 320 we carry in the tank. 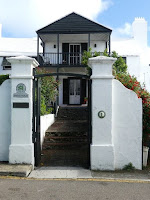 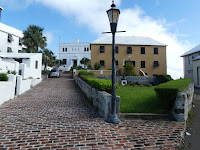 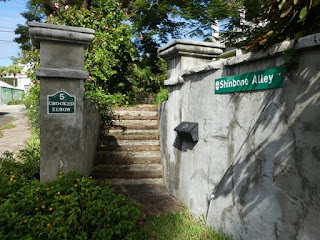 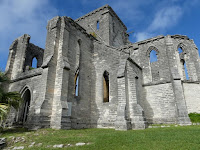 Over the coming days, we'll check the provisioning and top up the made up meals in the freezer. Tim has a hankering for fishcakes.  Tomorrow we are getting a bus to Hamilton, the capital of Bermuda.  We'll site-see and do a little shopping for fresh produce.  We expect the food prices to be just high as the price of fuel, so I'm not sure how much we will come back with.  It will be a nice day out regardless.