All is well for us down here in New Zealand.  After booking 2 sets of flight for a visit to the UK and Canada, starting a passsage on Larus to the South Island and having them all cancelled, I have been loath to mention any plans.

We are both double vaccinated, will be getting our booster in the coming weeks, are fit and well, lurking at anchor in some of the more remote cruising areas north of the Bay of Islands, and are keeping very much to ourselves.  Prior to leaving the Whangarei area, we stocked up on KN95 masks and all my Bin Inn staples and went out to anchor.

We left Marsden Cove Marina on the 20th of January and prior to Tim going out to yesterday for milk, we have been keeping ourselves to ourselves.  We knew it was just a matter of time before the Omicron variant escaped the NZ border quaratine facilities and we decided to put ourselves out of its path as best we could.

We aren't busy now but we had been pre and post Christmas.

Before Christmas we were helping out friends who are stuck in the UK and who's boats are on the hard in Marseden Cove Marina.

We finished a partial completed job of peeling the brown metallic 'wrap' hiding the rather tired hull of Supertramp. 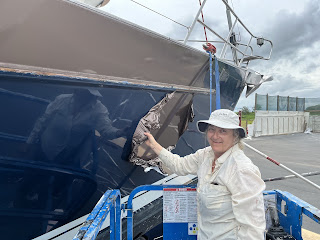 The wrap really wasn’t that keen on coming off.  Heat and brute force did the trick. 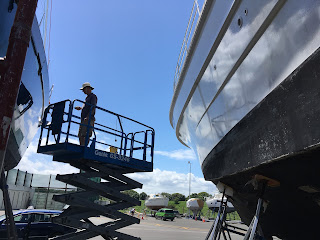 Tim enjoyed (a lot) using the scissor lift to get to those hard to reach places. 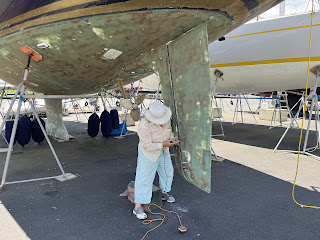 We also prepared and Coppercoat’ed the hull of ‘Into The Blue’ whose owner
was also stuck back in the UK.
Those jobs done, we met up with Colin and his guests on Burmese Breeze for Christmas in Parua Bay, just a stones throw from Marsden Cove Marina. 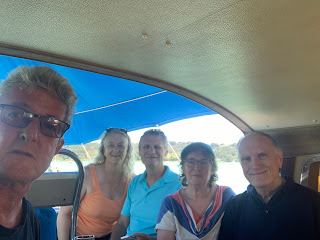 Colin, Tim and I, Gerri and Richard on Christmas Day.  The weather almost all the time we were there was clear skies, but the wind blew and blew.  Parua Bay isn’t hugely sheltered and was a very choppy week. Colin and guests started to sail down to the South Island shortly after Boxing Day.
They had a really good run down the East Coast, just over a week, and we were looking forward to following them within the next week or so.
Before that happened we were contacted by Dave and Leanne on Perigee and invited up to Basin Marina, Whangarei for New Years. 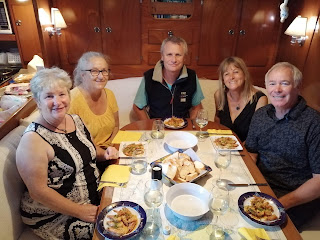 As well as Leanne and Dave, we met Carla and Alex on Ari B. We had quite a spectacular spread starting with Leanne’s sushi rolls, followed by Carla and Alex’s chilli prawns and a main course of baked salmon. My contribution to the meal was the spuds as we had been at anchor for a week and potatoes and cream were the only ingredient I had a lot of.   I used a recipe from The French Cooking Academy which resulted in a subtle melt in your mouth Gratin Dauphinois.
While in Basin Marina we picked up some shopping and saw how the Hundertwasser Centre had progressed since our last visit. 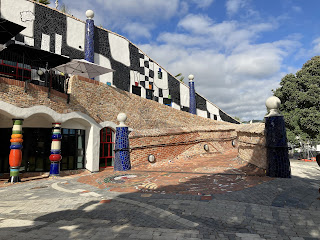 It isn't yet open but you get an idea of what a wonderful experience it will be when its finished.
On the 2nd of January, well provisioned we left Basin Marina to start our passage down to the South Island.  There are two routes to the South Island - one down the East coast and one down the West. Which route you take is completely dependant on the wind direction and it looked very much like we would be taking the West coast route.
We spent a day anchored at the mouth of Whangarei Harbour in Uruquart's Bay before hjeading north up the East coast toward the Bay of Islands.  We stopped the first night in Tutukaka and carried on the next down into the Bay of Islands. We stopped in one of the outermost anchorages on Urupukapuka Island to be ready for and early start to head further north the next day.
Well, once we’d dropped anchor, I turned on the hot water tap to find the water wasn’t hot. We had been motoring for at least half an hour which is plenty long for the water in our immersion tank to reach scalding point.  I mentioned this to Tim who had commented in the previous days that the engine seemed to be running a little hot, but put this down to a much warmer summer sea temperature.
A quick look in the engineroom showed nothing until we turned on the engine.  The engine water pump had failed and was spraying water quite spectacularly over the front of the engine.  The front of the engine just happens to the be least accessible phyiscally and visually. When he would have first checked the engine he could see nothing out of the ordinary.
All plans of continuing to the South Island by any route were now out the windows. We decided to head back to Marsden Cove Marina with the next suitable forecast that would allow us to sail all the way to Whangarei Harbour.  While we watied for a favourable weather window, Tim a chance to assess what he could do to reduce the chance of the engine over heating. He disconnected the altenator as charging the batteries puts more load on the engine and he rigged up a hose in the engineroom to quickly top up the heat exchanger should it be necessary.  Despite the failed water pump, there was still adequate water in the system below the pump to cool the engine.
We didn't wait long before we had a forecast that would take us all the way to Marseden Cove Marina. We decided not to do the work in the Opua Marina in the Bay of Islands as the Whangarei area has a huge marine industry and any parts and tools needed would be more easily had. A big plus in favour of Marseden Cove Marina was that the car we have use of is parked there.
We had a cracking, if rough sail, down and were moored up in the marina by late afternoon.  We'd had a stiff easterly wind, which always seems to cause several metre high waves with a short interval between waves. When waves have a short interval, and the  7 second interval that day was short,  it makes the waves close together and because of that very steep.  When they are coming at you directly on the side it makes for an uncomfortably rough ride.  It also made us wish we'd fixed the dribble of a leak to one of our cabin windows where the sealant had perished, again, from the UV rays.

Happily, I had the forethought to make sandwiches before we left the anchorage and weren't forced to eat muffins the whole journey.
Marsden Cove Marina is landlocked except for a right-angle cut from the harbour into the basin. 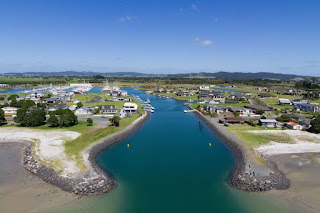 We had no trouble at all motoring out of the anchorage at the start of the trip or motoring in the marina at the end.
Our engine is a Ford Transit Van engine and is pretty robust. The short amounts of motoring didn't even get the engine warm. It is also a very common engine so parts are cheap. Our water pump was $100 NZ while a Volvo water pump cost a friend £700.
We started work quite quickly.  The engine room is quite small and in a pinch you’d eventually manage to change the pump, which is on the front of the engine, but you wouldn’t be happy! 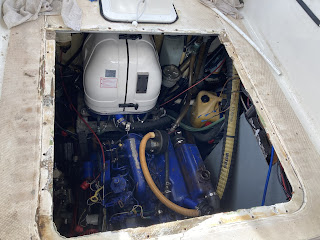 To make things easier we took out one half of the cockpit floor. This not only allows access from above the engine, but light and air as well. 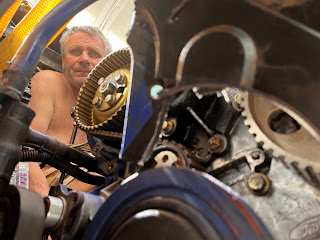 Access from the engine room doors or from above. The only direct access to the front of the engine in the galley. The bulkhead is structural so that’s the biggest hatch possible. My favourite photo. It shows how awkward a job it was.
We were done in record time. Once the pump arrived it was all over in a couple of days.  Without anyone else to help, I’m pleased that I learned quite a lot about our engine cooling system.
Taking the cockpit floor up is a pain, so when you have to it behooves one to think up any and all things that it allows you to do. Like taking taking out the generator to change the our working perfectly but old gearbox oil cooler which lives underneath it.
The generator sits at the back of the engine room. It would be much easier to lift out if we removed the aft cockpit floor panel, but this is a big job in itself.  The steering pedestal sits on top of the aft panel so all the hydraulic lines would have to be disconnected and the pedestal removed and it would add days to the job.
We managed in the past to get the generator out with only three people without disturbing the aft panel, but we were only two.  We use the main halyard to lift the generator vertically and we use a block and tackle to change the direction of pull to horizontal to get the generator out from under the aft panel.  Tim jury rigged a ‘slide’ made from a plank of wood braced on the engine. This allowed the generator to be tipped on an angle to 1) clear the aft panel above and 2) to get over the hump of our great lump of an engine ahead of it so that it could finally hang vertically from the main halyard and be lifted clear of the engine room.
It would have been great to have photos, but I do think you’d need an awful lot of people helping before you had a ‘spare’ for that. We managed it with 2 but one could probably find work for 6.
We got all the engine room jobs done, resealed the cockpit floor and resealed the leaking cockpit windows with a super duper sealant, drive up to Whangarei for one more big shop and to find the KN95 masks before leaving the marina.
Gosh, I nearly forgot.  During our last few days in the marina, our electronic barometer did a strange thing. At about 7 in the evening in fine weather the Gale alarm sounded and then stopped.  Normally we need to cancel it when there drop in pressure fast enough to register. We shrugged and carried on with dinner. It wasn’t till the next day we learned of the eruption of Hunga-Tonga-Hunga-Ha’apai. No Tsunami Alert had been sent out and we learned about the eruption from reading the BBC news the next morning.  It seems that our barometer registered the air pressure wave created by the explosion as it passed us in NZ.
We cruised from the northern most islands of Tonga down to Tongatapu in the south visiting many of the island’s in between in 2019. We met many poor but generous people and had hoped, pre- Covid, to return.  We now hope that are more saved than seems possible from what information we have and that the country receives immediate and and long term assistance. We can help by donating to The Red Cross Tonga Appeal.
We are currently anchored on Mangonui in the Far North of Northland.

The summer holidays are finished here and it’s very quiet. We are the only boat at anchor right in the middle of bay.  We plan to move in a day or two into the next bay north of us and continue to keep ourselves to ourselves.