A little about our time in New Zealand thus far

We've been in Whangarei Marina, Town Basin, Whangarei for over a month now and are really pleased with the marina and the area around. The Things to do in Whangarei site I found gives you some really nice photos of the water front. 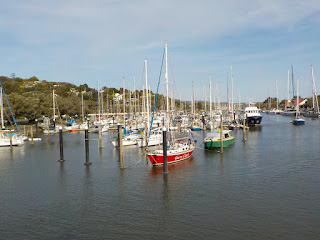 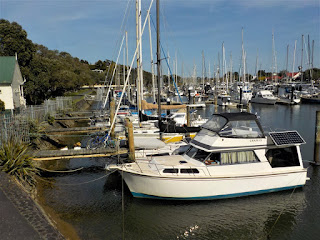 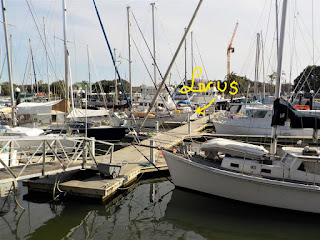 The marina spans both sides of the Hatea River with the majority of the pontoons and jetties for boats on the north bank and the main marina facilities and the town on the south side of the river.  There is a footbridge that connects the two sides.  We have direct access to the shore, but for less cost a month you could moor up between piles in the river.  There are quite a few people who row ashore, but we have just a short walk to the green roofed building in the second photo which houses toilets, showers and laundry.

You can also walk along river paths further up stream to the Whangarei Falls, a 26 metre high curtain waterfall.  The walk is around 3 hours each way through forest and farm land.  We've only walked half way there so far but we have been busy.

The weather is warming up and we have longer periods when it is fine.  Its still very cool at night but you can really feel the strength of the sun on a clear day.  They have the same sun protection ethos as Australia and I have stocked up on  a couple nice new batches of factor 50 lotion.

One of the exciting things coming to Whangarei that we will miss is the currently under construction, the Hundertwasser Art Centre & Wairau Maori Art Gallery.  I keep willing them to build faster but I don't think it will be done by May.

There is a lot we haven't seen yet like the Kiwi Centre where they have areas where day and night are reversed so day time visitors can see the nocturnal Kiwi going about their nightly routine.

What we have been going is getting things done on Larus.  Tim has done some amazing work installing our new solar panels.

Willis Sails, based in Kerikeri, Northland did a really good job on our new main and mizzen sails and the sail covers. Both the main and mizzen are 'loosed footed' which means it is only connected at each end of the boom rather than having to feed the foot of the sail into a groove in the boom, which was always tricksy and often troublesome.  It also makes for a better sail shapes, so we expect to be able to go faster under all points of sail (wind directions).  Our old sails were 18 years old, stretched and sun damaged, and we are sure to be pleasantly surprised. 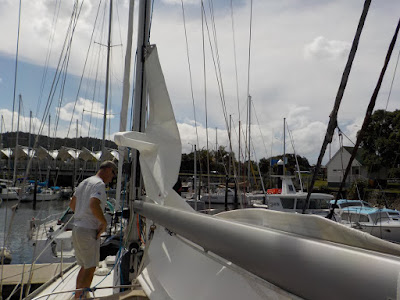 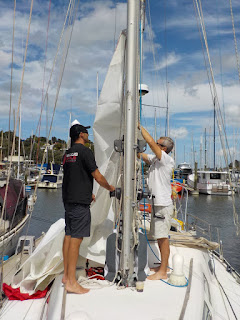 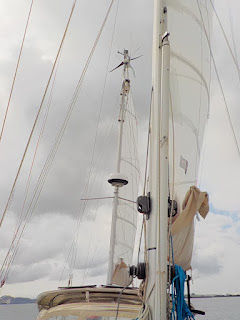 The new sails start to go up; Tim and the sailmaker attaching the sail to the slides on the mast; A few days later we tried the sails out and despite the light winds Tim was more than pleased with them.  The sail area of both sails is a little greater than the old sails and we expect our boat speed to be much in proved. 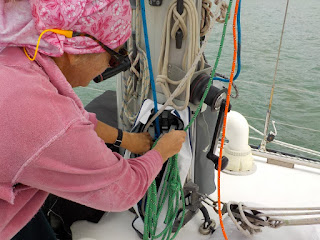 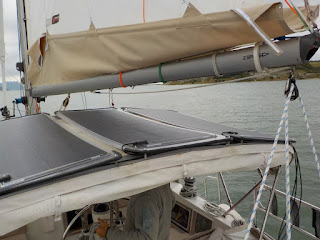 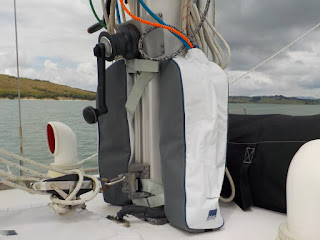 We've never had a truly satisfactory way to keep the lines all the lines at the base of the mast until Tim bought two line bags that attach to the mast. Each bag has 3 sets of clips that are clipped around one coiled each. The lines are then tucked into the bag and the bags are zipped up.  The system is tidy and will reduce sun damage on the line.  The main halyard, the line that pulls the sail tight along the boom and one reefing line live in the port bag. The jib halyard and the remaining two reefing lines live in the starboard bag. You can see the reefing lines coming out of the end of the boom (white ,green and orange lines) where they are each fed through a ring sewn into the sail at each reefing point. The line is then tied securely on the boom.  So when you pull/tighten a reefing line at the mast, it draws the sail down to the boom. Our type of reefing is called 'Slab Reefing' as the sail folds down on to the boom in 'slabs' as you reduce or drop the sail.

Once we're finished sailing and are anchored, on a mooring or in a marina, we zip the beautiful new 'linen' coloured sail bag over the sail to protect it from sun damage.  The old sail navy blue covers were as old as the sails we replaced, 18 years. The zips and Velcro had either failed or were on the verge of failing, which made securing and protecting the sail a frustrating process.  Not only are the covers easier to use but they are easier on the eye as that match the sprayhood and the zip in piece between that closes the gap between with the bimini. 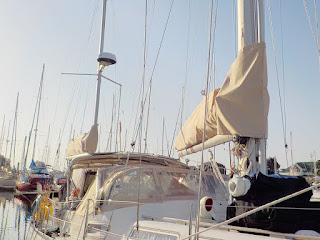 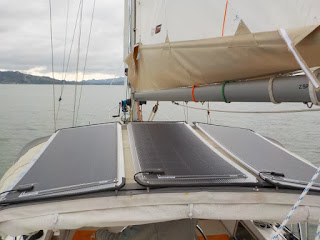 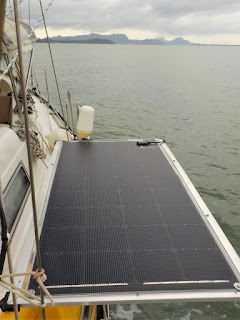 Another big job for Tim was to install our new solar panels.  We now have three on the top of the bimini and one on each side.  All the panels are high quality of German make and Tim installed them each with their own controller.  Individual controllers mean that any shadow on one or more panels does not affect the out put of the others.  They are fantastic and Tim can sing their praises in a post of his own.

And last but by no means the least, is on the first things we replace when we were still in the marina in Opua, is our anchor. 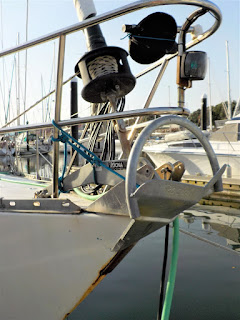 We had to replace our Spade anchor as its was badly rust damaged.

We would have like to replace it with the same type but they are made in England and buying one in NZ was REALLY expensive.

Instead we bought an very popular Rocna, which is REALLY expensive in England but VERY good value here in New Zealand where they are made.

It doesn't sit on the bow roller as well as the Spade and it needs a nudge into position to self launch, but it sets and holds really well.

This will be the last post for sailing for a few weeks as I am on the road with a friend from Canada.  Susan and I are travelling down through the North Island and into the South Island where Tim will join us for a few days.  My next post will be 100% New Zealand.